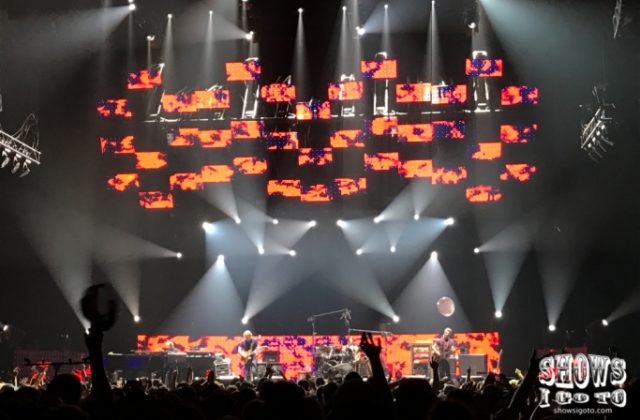 We here at Shows I Go To apologize. Sometimes, we get too drunk, stoned, excited, sweaty, smelly or just too fucking busy. While our brains (until soggy with whiskey,) remind us to snap a picture at the show, record a snapchat or write a review hastily etc… Our hearts remind us to put our phones down and dance our cute little butts off. As journalists, it’s important to carefully balance the head and the heart. That balance allows a reviewer to personally get the most out of a show, while still being able to encapsulate the performance and pass it on to the masses. Music is our passion; from Slayer to Bieber (we somehow employ fans of both.) We want to bring you to your favorite artist’s show through our glazed over, bloodshot eyes.

We are so honored and extremely privileged to be working with and involved with so many amazing people, bands, venues, and corporations. There are many vessels that have granted us opportunities in the world of music many of us could never have dreamed of.   We realize whole-heartedly that we are lucky to be doing what we do, and strive to do so more efficiently. So, here’s to all the shows we had too good of a time at, to all the shows which were literally indescribable, and to all the shows which came exactly when we needed them. Thanks to all the incredible artists who create these escapes. We are eternally grateful to the beautiful artists and people who we are so lucky to meet along the way. 2016 was a big year for Shows I Go To, including a ton of giveaways, interviews, reviews and even a fucking documentary. So please forgive us for forgetting, binge drinking, and working our asses off, but these are the Shows I Go To 2016 LOST REVIEWS. Please enjoy (at your own risk.)

The phrase, “I have a few Phish t-shirts in the back of my closet,” has never been about engaging with educated fans on the topic of the band, but more of a statement indicating whether or not someone is “hip to it.” Phish fans, closeted, converted, or cacophonous, understand the lifestyle associated with this music and the environment’s eccentricities. Wearing a Phish concert tee creates a sign upon your chest which clues people into your comprehension of the culture and philosophy. Recently, I was offered the opportunity to experience my first Phish concert with two other virgin guppies, and one veteran bass.

Phish is synonymous with a sea of stoners and psychedelics but the focus of this concert review will not be drug culture. Instead, seeing as how this bait is too large to ignore, let’s take a quick nibble and come out the other side with a stronger sense of what connects these fans. Tie-dye shirts, Teva sandals, and tons of skank… these seem like the ingredients to any jam band concert. Just near outdoor parking lot Z of Veterans Memorial Arena, all of these elements were present in a picturesque 60s music festival frozen in time. This magical land is known as “Shakedown Street” which is a nod to one of Phish’s more musical mental influences, the Grateful Dead. Here on Shakedown Street, anything in or out of this world goes. The area was lined with cars, vans, trucks, tents, homemade kitchenettes, and porta johns. The importance of this area isn’t its development, but the side conversations that soar through the sky and hang low like a thick smoke. 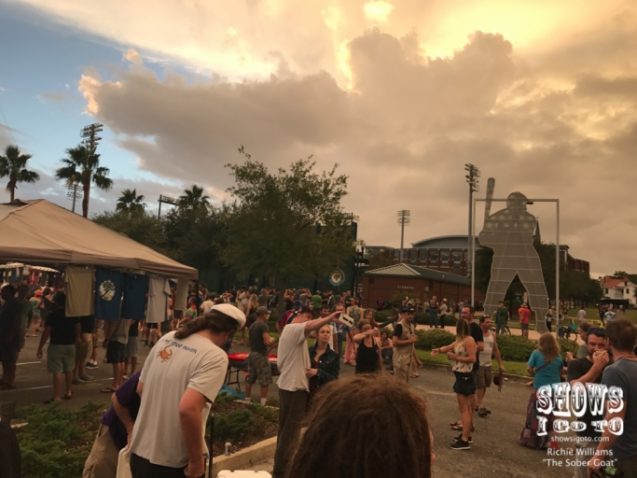 While I wandered along the recently wet path, I took in all of its wares. Women with swatches of colorful fabric formed into scarves or shirts would shout out, “Handmade! 5 dollars! We need gas money for Nashville!” attempting to make the next tour stop for Phish. A shirtless man made grilled cheese sandwiches on a small campsite stove with a cardboard sign which read, “Friend needs a ticket.” Caught up in the confusion, I attempted to place my empty into what I believed was a garbage can, only to realize that the receptacle was actually full of off brand drinks labeled for resale. While correcting my error I heard, “Not a problem man.” These minor moments are what sunk in about Shakedown Street but this is also where their drug stigma grows strong. Through the throngs of these people, often the conversations contained questions about who had such and such substance. “Mark’s got liquid mushrooms man.” Or, “Does anyone have any acid?” These statements sat by while reams of papers were turned into joints that jolted between hands. The pre-gaming was taking place but not all in attendance partook or maybe, “didn’t inhale.” But something was roping these bodies together and I determined that the answer to that question could only be reeled in at the show. 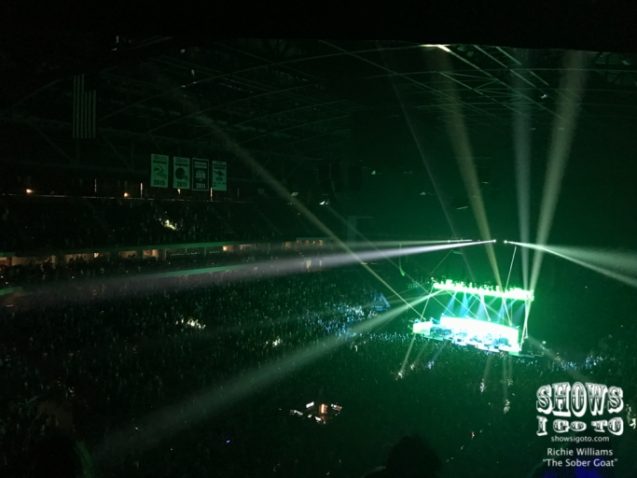 Once inside, I gathered my school of fish to pass through the arena threshold into the standing general admission area. It seemed as though we were about to embark on a long journey and this moment would be one we retell at reunions or round about social events. Seeing as how we were slightly early for the show, we took this time to take a seat on the stadium floor. In our little circle, the veteran Phish member described the finer points of this culture. One: There is no opening act. Having been to hundreds of shows before, this seemed strange to me. The point was made to add emphasis to mentally preparing for this phenomenon. Phish wants you to be with them on this quest, and in order to do so they must have your attention at all times. This brings us to numbers two and three. Two: There is to be no recording of Phish shows on cellular devices. Seeing a show through a small screen is certainly never the same and it removes you, and the people around you, away from the experience. Three: Surrender to the flow. A cornerstone of Phish philosophy. Surrendering to the flow is a school of thought which sanctifies expression through no singular way. Whatever someone is feeling, they are asked to express through dance, embrace, or emotions as long as it doesn’t interfere with other’s experience around you. Head nodding, “noodling”—Phish’s unique form of dance—and, air drumming along with many more are all acceptable. The fourth and final note: Phish has two full sets and one encore. Therefore, the average Phish concert lasts 3.5 to 4 hours and they play the whole time with one 15 min break in between sets. Those kinds of numbers are musical skill for any band. With our fisherman’s finer points in mind, we stood up after a short sound check and swam towards the sound. 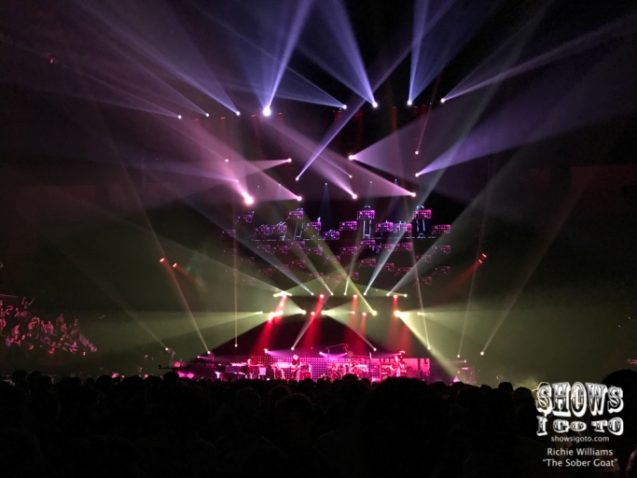 Musically I know little to nothing about Phish. If placed on a chopping block, there would be no way to save myself from the knife by naming one of their albums or songs. I have always considered them an overrated neighborhood dad band with trippy lights and long solos… and personally I wasn’t short in this scrutiny. Something happened though, as soon as the lights went on and the band took center stage I began to give way into their world. Phish opened with “Kill Devil Falls” a 20-minute song with seemingly simple chords and lyrics but there was an astonishing number or solos in various lengths. Looking around the large arena, packed with people like sardines in a can, I couldn’t see a single person standing. Everyone was in their flow dancing alone, with significant others, and strangers. 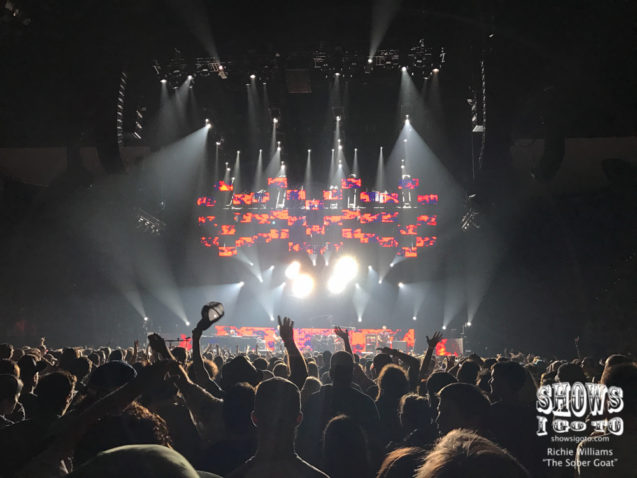 Somehow it all made sense to me now. People don’t come to Phish for the complexity, but the simplicity. It’s a way of approaching music for the moment of music. That moment we may pass up in displaying by ourselves because we are too scared, nervous, or concerned with the thoughts of others. Everyone there is doing exactly what they feel at that moment. The Phish family wants to unhook you from the worries about future and past in order to swim with you in the present.

SET 2: Crosseyed and Painless > Steam > Piper > Wingsuit, Sparkle > The Wedge, Wading in the Velvet Sea > Run Like an Antelope

Teases: Crosseyed and Painless was teased in Steam, Piper, and Run Like an Antelope

Walk-In Music:
Greensky Bluegrass – Shouted, Written Down and Quoted
Pastor T.L. Barrett and the Youth for Christ Choir – Like A Ship (Without A Sail)
Pretenders – s/t