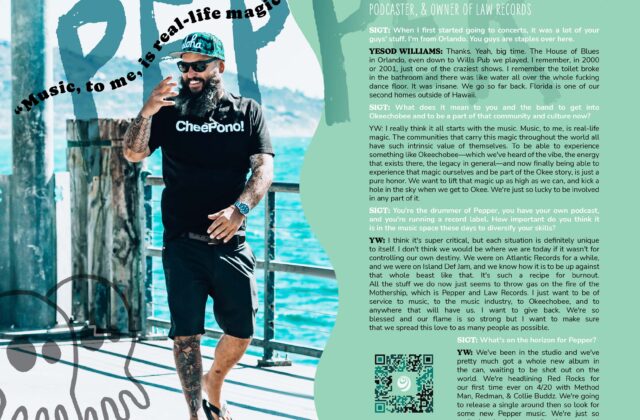 Drummer of Pepper, owner of Law Records, and podcaster.

SIGT: When I first started going to concerts, it was a lot of your guys’ stuff. I’m from Orlando. You guys are staples over here.

Yesod Williams: Thanks. Yeah, big time. The House of Blues in Orlando, even down to Wills Pub we played, I remember, in 2000 or 2001, just one of the craziest shows. I remember the toilet broke in the bathroom and there was like water all over the whole fucking dance floor. It was insane. We go so far back. Florida is one of our second homes outside of Hawaii.

SIGT: That’s awesome. Yeah, I know. The Kash’d Out boys too.

YW: They’re our new guys on Law Records. We’re so psyched on them. They’re like the War of Attrition. They’re just steady as she goes, slowly building. It’s all organic and it’s just working so well for them. I’m so psyched for those guys.

SIGT: It seems like you do it all. You’re not just a drummer in a band.

YW: I like to think of myself as the Lars of Pepper. Drumming is my heart and my passion, and it runs in my veins, but it’s also my springboard to everything else that I love and all the other passions I have, whether it be the record label, whether it be just even talking to you today, whether it be going to Guitar Center to pick up some shit you need for the studio. It’s just a lot of gratitude that exists. We’re actually celebrating the 20th year anniversary of our second record, ‘Kona Town’, this year. The journey has just been so amazing, and we’re so blessed, and it’s amazing that it’s getting better every day after this thing. I just come from such a place of amazement and gratitude. I always revert myself back to the 13 year old version of me, and my mind just is completely blown to pieces. I’m like, I can’t believe this is real.

SIGT: That’s incredible. That’s the dream, man. You guys are doing it. So what does it mean to you and the band to get into Okeechobee and to be a part of that community and culture now?

YW: I really think it all starts with everything in our world. It starts with the music. Music, to me, is real life magic. The communities that carry this magic throughout the world all have such intrinsic value of themselves. To be able to experience something like Okeechobee, that we’ve heard about the vibe, the energy that exists there, the legacy in general, and now finally being able to experience that magic ourselves Okee story, is just a pure honor. We want to lift that magic up as high as we can and kick a hole in the sky when we get to Okee. We’re just so lucky to be involved in any part of it.

SIGT: Being all the way from Hawaii, how hard was it to literally grind to get to where you are today?

YW: We started the band in 1997, right after high school. We grinded, playing, like, bars, parties, house parties, whatever, in Hawaii for a couple of years. Then we moved to San Diego in 1999. All we knew is that Sublime had this album called ‘Stand By Your Van’ and thought we needed to buy a van and start playing places all over the mainland. That’s all we knew. We get to the mainland, we start opening up, let’s call this place that place, whatever. After grinding that for a while, we link up with Volcolm who are starting their record label, Volcom Entertainment. They were starting to work with the Warped Tour and Kevin Lyman, and they get a stage, The Volcolm Stage on the Warped tour. It lasted from 2000 to maybe 2008 or nine. It was one of the makeshift side-stages that was made out of wood. It was like. It was pretty punk-rock. In the early years they would offer one of the bands on the label a slot on the tour. So they asked us if we would like to come on a Warped tour? And of course we’re like, “Are you fucking kidding me? Of course we’re going to come on a Warped tour. This is why we’re over here.” Then they’re like, but you need to set up the stage and break down the stage every day. At the time, we’re like, that’s easy. No worries. We’re on it. So they gave us the Volcom marketing van, which the AC broke in a week into the tour. We’re driving ourselves in this van, and everything starts to set in about a week into the tour, because we’re like, “oh, my God, we need to be there before everyone to meet the semi-truck flatbeds at, like, 630 in the morning to get all the elements to the stage and tell them where to fork-lift them over. Then find out from the promoters where our stage is today. And then manually set up the stage with a huge tent on the stage, the whole thing. We did that the whole summer. It was the most brutal thing. We couldn’t hang out for the barbecue afterwards because we had to get out of there in time to get to the next venue at 630 in the morning. It was insane. But in the same sense, as much torture as it was, it was so grueling, now I look back at it and it was one of the most amazing experiences. Talk about a character builder! After that tour, every other tour seemed like a cakewalk.

SIGT: You’re the drummer of Pepper, you have your own podcast, and you’re running a record label. How important do you think it is in the music space these days to diversify your skills?

YW: I think it’s super critical, but each situation is definitely unique to itself. I don’t think we would be where we are today if it wasn’t for controlling our own destiny. We were on Atlantic for a while, and we were on Island Def Jam, and we know how it is to be up against that whole beast like that. It’s like such a recipe for burnout. All the stuff we do seems to just throw gas on the fire of the Mothership, which is Pepper and Law Records. I just want to be of service to music, to the music industry, to Okeechobee, and to anywhere that will have us. I want to give back. We’re so blessed and our flame is so strong but I want to make sure that we spread this love to as many people as possible.

SIGT: What’s on the horizon for Pepper?

YW: We’ve been in the studio and we’ve pretty much got a whole new album in the can, waiting to be shot out on the world. We’re headlining Red Rocks for our first time ever on 4/20 with Method Man, Redman, & Collie Buddz. We’re going to release a single around then so look for some new Pepper music. We’re just so excited to be just spreading love, even at greater volumes these days. Aloha!