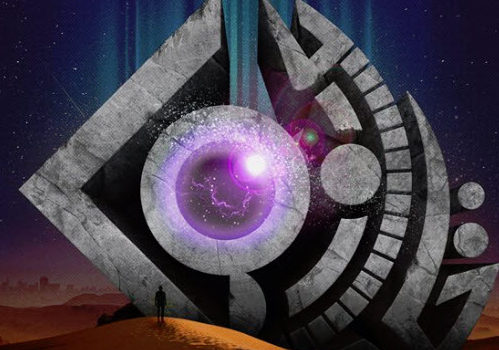 Eeeeek! Run and hide! A two-headed monster is closing in on the Southeast and everyone should fear for their lives! Okay, no need for fear, but everyone should be rushing to purchase tickets for the upcoming co-headlining tour featuring space-rock monsters, Papadosio, and mind-melter, Phutureprimitive. The monster is terrorizing the countryside and everyone should flee to one of twenty safe-zones that are located on the poster below! There are FIVE FLORIDA DATES including Gainesville 9/27, Orlando 9/28, Ft. Lauderdale 9/29, St. Petersburg 9/30, and Tallahassee 10/1.

Papdosio returns to The Plaza Live in Orlando on Thursday, September 28th!

CHECK OUT OUR REVIEW OF PAPADOSIO AT THE PLAZA LIVE IN ORLANDO LAST YEAR!

CHECK OUT OUR REVIEW OF PAPADOSIO AT PURPLE HATTER’S BALL 2016!

Papadosio is a five piece hailing from Athens, Ohio. The band members are: Anthony Thogmartin on guitar, keys, vocals; Billy Brouse on keys and vocals; Mike Healy on drums; and Rob McConnell on bass, vocals; and a recent new addition of Sam Brouse on keys and vocals as well. Now 7 albums deep and fresh off a recent headlining night at the illustrious Red Rocks Amphitheater, Papadosio is a heavy-weight band not to be missed.

And then there’s the wonderfully weird Phutureprimitive, also known as Rain. Since 2004, he’s been paving his own path. First with the success of his debut album, Sub Conscious, and later with repeated hit singles, Rain has stayed afloat in a world where most DJ’s can’t tread water but for a few weeks. What does he sound like? Well, his music can’t be put into a box. But, as I listen to it now to describe it to you, I feel like I’m standing in the rain, watching Transformers fight a choreographed battle through a color changing kaleidoscope. It’s great stuff: sexy warm beats in the back, with funky electro-sounds in the front.

TOUR ANNOUNCEMENT: Papadosio and Phutureprimitive by Spencer. Edited by Richie.