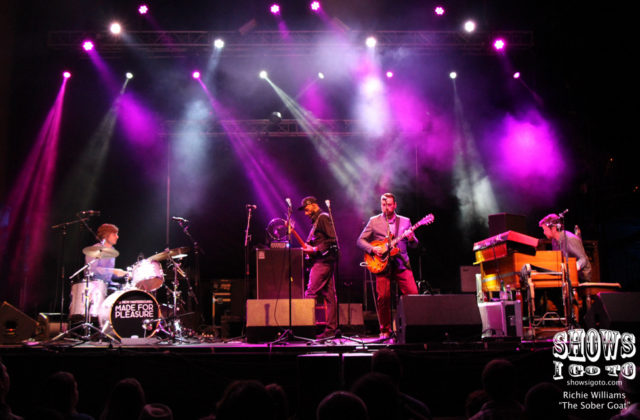 October Saturdays in Central Florida are a beautiful thing, and this one was no exception. The first cold front of the season was moving in, pushing everyone outside to parks, lakes, and beaches. Or if you’re like my group of friends (who are no exception), gathering for an afternoon backyard barbecue birthday party. Normally we would stick around for the night time festivities, but great music was calling Richie and myself. So we made the trip westward from Orlando to Jannus Live in St. Petersburg where we had the pleasure of seeing the double headlining acts of Turkuaz and The New Mastersounds. This great outdoor venue is in the middle of vibrant Downtown St. Pete, boasting with balconies, trees, and amazing atmosphere as it is essentially an urban courtyard.

We stepped inside the venue just before Turkuaz took the stage. This massive power funk group from Brooklyn, NY fits nine members on stage and immediately starts a dance party. The right side of the stage is shining with beauty as the two gorgeous vocalists (Sammi in Pink, Shira in Yellow) show off their synchronized dance moves, while the left side of the stage complements with tasteful solos from the horn section. Slowing it down, Turkuaz played the title track from their 2014 album Future 86. Next, the ensemble let out “Percy Thrills the Moondog” which is a fun sing-along jam that easily sticks in your head. A shower of funk rained from the stage for the next hour and a half, highlighted by their big time jams “Nightswimming” and “Murderface” off of their newest album, Digitonium. Following those incredible tunes was “Bubba Slide,” a fun ’70s feeling song that had room for everyone to solo, especially Greg Sanderson on saxophone and Chris Bowers on keys. Turkuaz finished the set with “Monkey Fingers” which slapped everyone in their face with a good time … a time that in my opinion was over way too soon! Check out the full set video, thanks to The Sober Goat!

Although I wanted more Turkuaz, I was pumped to have an hour and a half of funky, British soul. After a short break, The New Mastersounds took the stage and kicked their set off right with a funky guitar-led song that had space for both Joe Tatton on keys and Simon Allen on drums to solo. The kick drum head read “Made For Pleasure” which is their 2015 album, and it was apparent that they were pleasuring the rowdy crowd. The next time they stopped playing, they let the crowd know about a fan request at their van earlier in the day, and they would be honoring it. It ended up being great for everyone as Eddie Roberts dazzled us with his speedy funk rifts and lengthy solos. You can tell when Eddie is really getting into a jam when he bends his knees and digs deep into the groove. Nice form.

The highlight of the set had to be when they played “Summercamp” (off of the 2012 album Out on the Faultline), a softer groove jam that gets gradually louder as it reaches a beautiful crescendo and then gently sets you back on your feet. The Turkuaz horns were brought out for a song, then one of the vocalists (the pink one some joked) joined and added her roaring soulful sounds. The New Mastersounds finished the set by welcoming all of Turkuaz on stage and both bands together performed two songs to send us off into the night buzzing. Wow, an hour and a half sped right by! Check out the full set video, thanks to The Sober Goat!

What a great night.  Make sure you catch Turkuaz and The New Mastersounds if they come to your neck of the woods, or your side of the pond!