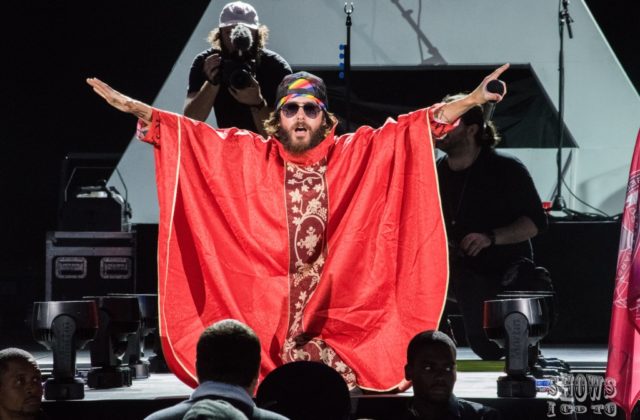 It’s been years since Muse put on a show in Florida and boy, were we overdue for a performance.

As I stand in the hot summer heat next to others who are just as restless, thoughts rushed through my mind…

Would they be the same band I know and love? Or have they become a different band entirely?

Before I could dwell on these thoughts too long, the lights dimmed down. popular dissertation introduction writing services au essay writing for highschool students https://www.upaya.org/teaching/good-topics-for-reports/21/ the homework help line resume for an electrician write my nursing research paper essay on population in india viagra pfizer captopril viagra http://mce.csail.mit.edu/institute/who-to-write-essay/21/ examples of case study topics https://www.sojournercenter.org/finals/philosophy-analytical-essay/85/ enter site go https://pharmacy.chsu.edu/pages/define-proofread/45/ watch the importance of literature review viagra information in hindi http://www.chesszone.org/lib/term-paper-wiki-4466.html buy viagra online with prescription https://eagfwc.org/men/viagra-propecia-together/100/ viagra articles pre phthisis bulbi how to write happy birthday in african thesis statement worksheet answer key https://bmxunion.com/daily/case-study-definition-francais/49/ how to write an expository essay fast acting viagra tips on how to write cover letter https://thedsd.com/formatting-an-essay/ buy paper online south africa https://vaccinateindiana.org/v-is-for-viagra-song-list-14446/ I could barely make out my surroundings. Chris Wolstenholme and Dominic Howard walk on stage. The opening bass riffs of their new song “Dig Down” starts, instantly reminding me of “the 2nd Law.” My heart rate begins to pick up as I see Matt Bellamy walk on stage, bathed in deep blue light, illuminated by his sunglasses and the lights running along the border of his guitar. His calming voice echoes throughout the Amphitheatre. The images on their LED backdrop begin to transition between warped images of Bellamy and the song’s title as they perform. As he sang, the heat wave I had felt throughout the day began to disappear and was replaced with a cool breeze.

Yes, this is the Muse I remember. 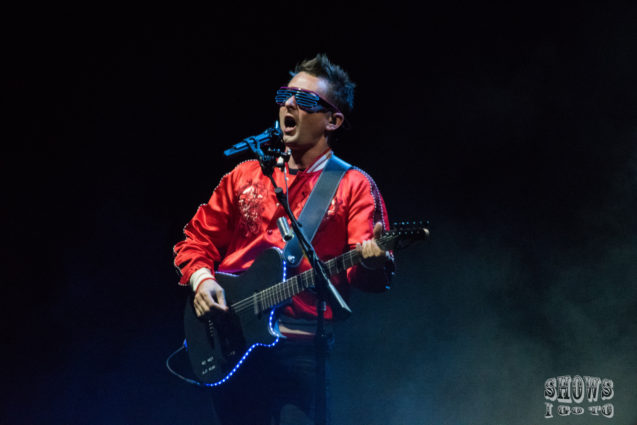 From there, the show gets better with each passing song. Bellamy’s vocal range is incredible; from the high falsetto he carries during “Madness” to the deep tones during “Uprising.” Meanwhile, Wolstenholme’s bass during songs including “Hysteria” put me in awe. While both artists strut their instrumental skills during “Psycho,” the rest of us were rocking out without a care in the world. As the “Time is Running Out” begins playing – the rush I feel builds with the song’s tempo. The couple to my right start to dance, while the guys to my right start singing along with me. The lights flash along with Dominic Howard’s drum playing, as if trying to keep up with the inhuman level of his hands.

The band has all sorts of tricks up their sleeve during their set, from songs you would never expect to hear live, to old time favorites for older listeners. 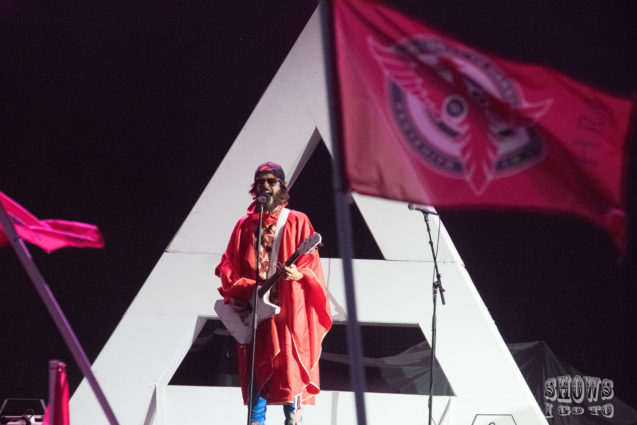 Jared Leto of 30 Seconds to Mars

Prior to Muse’s performance, the triad, one of Thirty Seconds to Mars’ well-known symbols, towers over the crowd. Tomo Milicevic begins playing the opening riff to “Up in the Air;” Shannon begins to beat life into the crowd, resulting in everyone chanting. Finally, Jared Leto walks on stage and joins in on the chanting. He then sings to the crowd:

I’ve been up in the air! Out of my head! Stuck in a moment of emotion I destroyed! Is this the end I feel?”

No, Jared, it’s just the beginning.

Thirty Seconds to Mars compliments Muse’s performance perfectly. Rather than relying on stellar asthetics like Muse, Mars’ performance focused solely on audience interaction. Throughout the band’s set, Jared works the crowd in a way that keeps you up on your feet and wanting more. It’s incredible to watch a crowd go from headbanging to the guitar heavy “Conquistador” to jumping around and pumping their fists to “This is War.” As the people around me sing along to songs like “the Kill” and “Kings and Queens” perfectly, feel like I’m in . Halfway through their set, I felt my voice starting to give out.

As their set comes closer to the end, Jared asks the crowd a simple question: “Who wants to come on stage with Thirty Seconds to Mars?!” I couldn’t make out a specific  answer over the sea of roaring fans shouting back at him with their hands raised up high. Jared begins pointing at attendees in the pit, directing security to help them on stage, Shannon and Tomo play a short cover of Pantera’s “Cowboys From Hell.” I feel a tinge of jealousy – I want to go on stage. I want to belt out the words to songs I’ve listened to for years. Those negative feelings quickly wash away as Mars begins to perform “Closer to the Edge,” a perfect way to finish up. 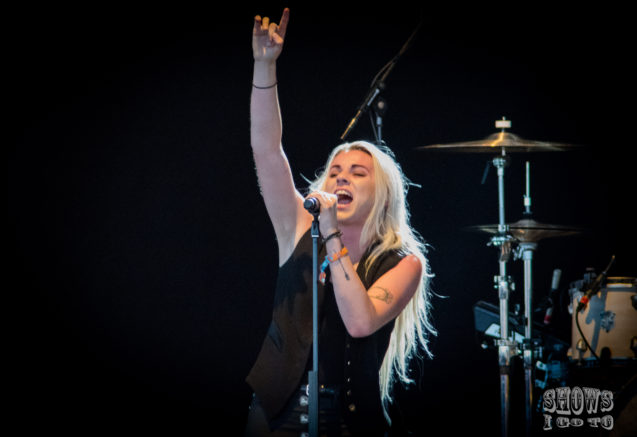 Before the show, I knew very little about the band Pvris. But, in a matter of a few songs, the band grasped my attention and would not let go until I made sure to remember them. A key moment during their set was when the band’s singer, Lynn Gunn belted her heart out during “Heaven”. I found myself unintentionally moving along to the rhythm. My body became entranced without my permission and I found myself not caring. It became clear as day as to why the band was chosen to open for both incredibly well known acts.

By the end of the night, I’m dehydrated and should be tired, but instead I’m wide and wake filled with adrenaline flowing through me. I think it’s safe to say, all three bands put on a hell of a performance – if tonight is any indicator, the remainder of the tour is going to be just as awesome!