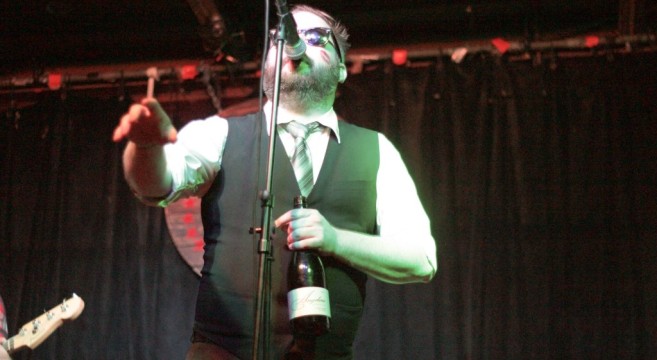 He was sporting a single red-lipstick kiss on his cheek, just above his beard. His dark sunglasses blocked out all the evil in effort to only let the Holy Lord in! And, he sang the Lord’s prayer, LOUD, true and drunk. “I’m a big believer in the healing power of Rock n’ Roll,” Richard Sherfey preached, sometimes swaying with the music, sometimes with his red wine (the Lord’s drink).

The first couple times I saw Richard Sherfey and All God’s Children I didn’t get it. He was selling the worship band thing pretty hard, hard enough that he convinced me that he was serious (which wouldn’t have been a bad thing). Well, I was wrong. And I’m glad I was. I’ve crawled out from under my stupid rock and I now clearly see the spectacular show this man and his band are putting on. It’s fantastic. It’s hilarious. It’s fucking rock and roll.

Our friend, Kyle Cox opened for Sherfey, coming down all the way from his new home in Nashville, TN. Cox has a knack for intimately drawing you in and peeling apart your emotions layer by layer with his carefully constructed narratives and storylines. He understands the importance of dynamics, even when it comes to just an acoustic guitar and some honest words. Listen to “Field Of My Heart” and Download it For Free on the Free Downloads page.

I caught up with Kyle after the show and he let me purchase one of his brand new CDs. Let’s just say, this new album is going to be Huge for Kyle Cox. He gloriously fine-tunes his craft and has a full band to back him up on the new album. Hear the first track on the album, “I Ain’t Been Lonely Until I Met You” below, and purchase his new album, The Plan, The Mess, at http://www.kylecoxmusic.com/

Richard Sherfey & All God’s Children opened with a Beatles cover of “A Little Help From My Friends,” a bold move, but very well received. Once that first chorus hit the worship walls in Will’s Pub, we all knew we were in for a celebratory evening. We raised our pint glasses and PBRs high towards the dirty cathedral ceilings and spilled our spirits freely, fully giving in to the drunken Gospel Hymns.

Sherfey and his band are up there having fun, like they ought to be. Their bassist in particular is a 100% believer is Sherfey’s good Gospel. The good Lord seemed to have taken over his body, whipping him forward and backward on beat with the worship music. Here’s a shitty pic: 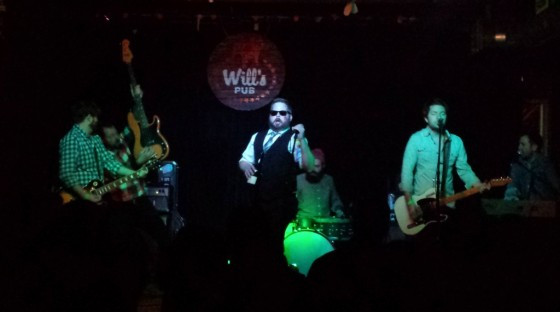 I felt as if I was witnessing a live healing on stage. Sherfey put his open hand out to us, offering the healing power to every one of “God’s Children” in attendance. His other hand was occupied by both a half-full bottle of wine and a microphone. We reached our non-drinking hands upward to accept his energy and continued to sing our praises with him. “Can I get an Amen!” He yelled.  That’s when we knew the mass had ended.

Go now! Be a witness to the good Gospel and allow Sherfey and to heal you with the good Lord’s lyrics and some dark red wine. May peace be with you.