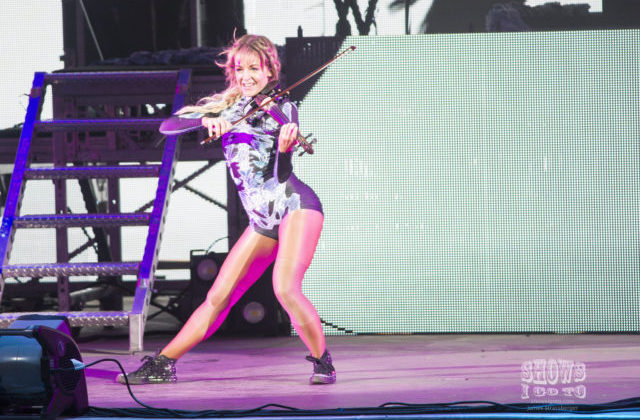 As I sat in the middle of the crowded amphitheater, I felt eager. Last time I saw Lindsey Stirling,  she was celebrating the holidays with a like-themed set. Now, that it was summertime, I had no idea what to expect.

Once the 28-piece orchestra walked on stage, each member began taking their seat, followed by their conductor. As the lights dimmed, a short video began to play, featuring various moments throughout Lindsey Stirling’s career. This montage included scenes from her music video covers, and Piers Morgan’s negative critique of her performance during her time on “America’s Got Talent.” But, if her Jacksonville show were any sort of indication, the crowds didn’t care for Morgan’s criticism, as the venue erupted with applause as Stirling took the stage. As she opened her show with “The Arena,” Stirling strutted across the stage playing her violin with elegance, yet, such simplicity; it was as if she was breathing.

Both she and her orchestra seemed to resonate well with each other, playing flawlessly while moving in a distinct motion, as if they were hearing something that we in the crowd could not.”

Speaking of motion, the presentation was often very dramatic. As she performed “Take Flight,” the stage became a starry night. Stirling stood on a 15-foot riser, wearing a beautiful dress, and on her breakthrough 2012 hit “Crystalize,” she again, was zigzagging across the stage lit by a mirror ball, keeping perfectly with the music’s tempo.

Between songs, Stirling would take extended interludes during which, the 31 year-old opened up about her personal experiences of depression and eating disorders, saying that successful people are those who pick themselves up every time they fall down. She urged the audience to overcome any/all fears, and have confidence in who they are.”

My personal favorite moment from the night was Stirling’s performance of an excerpt from “The Phantom of the Opera.” It truly captured the raw power the original version from the Broadway musical. Meanwhile, Evanescence’s performance was a very different experience all its own. It’s been two years since the band was last in Florida for the Kink Rock Festival. Yet, despite the band trading in electric guitars for brass instruments, the accompanying orchestra suited the music perfectly.

As Amy Lee sat under a single spotlight, she played a beautiful piano rendition of “Never Look Back,” her vocals truly shone through the night.”

Visually, the band’s performance was stunning; each song was accompanied by a different set of visuals. For instance, during “End of a Dream” was performed to visuals of thousands of crows flying all across the screen. The mixture of both visuals and of the music completely transformed Evanescence’s music into what could easily be mistaken for a film soundtrack. In order for the band’s orchestration to work, it seemed as though some songs had to be cut, including fan favorites such as “Going Under,” “What You Want,” and “Call Me When You’re Sober.” But, as the string section began to play the opening notes for “Bring Me to Life,” the crowd cheered loudly. Visuals of raindrops appear on the screen as a few fans stand in the aisles to dance and sing along with Lee. Although the song lacks the razor-sharp guitar riffs and the growling male vocals that made Evanescence a name to remember, Lee more than made up for it with the strength of her vocals, hitting high notes all of us were head banging to, as if it were your standard rock concert.

When Stirling joined the band on stage during “Hi-Lo,” a collaborative song written by both artists, I lost my mind. So, while this is a far different type of performance given by either artist, both artists will still surely wake you up inside by the end of the performance.