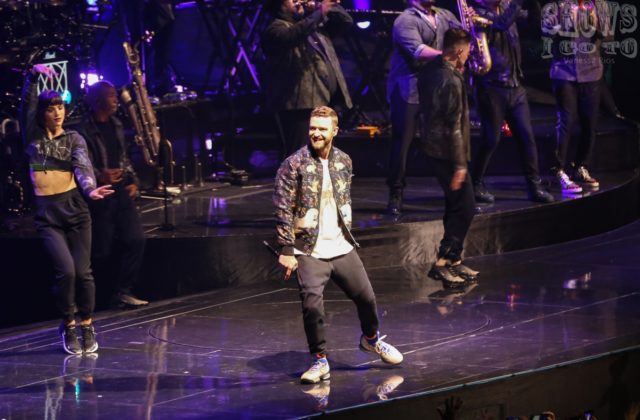 It’s 5:00 pm on a Monday, only two and a half hours before the Justin Timberlake “Man of the Woods Tour” at Amway Center begins.

I planned a quiet night at home with my family until I looked at my phone and saw a text that I had been approved last minute to cover the show! I immediately went into panic mode trying to figure out if I could make it work. I had less than three hours to find a babysitter, get ready, and make the drive from Haines City to Downtown Orlando. It wasn’t going to be easy, but it would all be worth it once Justin Timberlake hit the stage. My wife and I arrive at Amway Center in just enough time to get to our seats, with a few minutes to spare. It’s hard to believe just a few hours ago I was cleaning up dishes in my kitchen and now I am about to see one of the most talented artists of our time.

The stage was unlike anything I had ever seen. Instead of the traditional stage in the front of the arena, this stage stretched all the way from the floor to the back of the arena, complete with trees spread throughout, to fit the Man of the Woods theme. He made full use of this setup to play to the entire room from front to back insuring that there wasn’t a bad seat in the house. JT gets some air and shows Orlando his best dance moves.

Justin Timberlake rocked our bodies by giving us a taste of the best songs from his entire catalog. This may have been the “Man of the Woods Tour,” but he made sure to appeal to the fans from every point of his career. From the heavily pop influenced Justified, to the more bare bones Man of the Woods, Justin Timberlake proves he is also a man of many talents showcasing his wide musical styling. He opened with “Filthy,” the first track off MOTW which quickly brought everyone to their feet. Amway Center soon became a two hour long dance party with Justin Timberlake as our host. This was not a bad way to spend a Monday night.

After hitting us with a barrage of hits and fan favorites the likes of “Love Stoned,” “Sexy Back,” and “Suit and Tie,”  JT brought a stripped version of his band to the middle of the arena. He reminisced about his early days in Orlando working in The Mickey Mouse Club and *NSYNC. He then passed out shots to his band and led us all in a toast in honor of Orlando, before burning through a jamming rendition of “Drink You Away.”

He slowed things down a bit as he gathered around a campfire, which was surrounded by trees towards the back of the arena. Justin Timberlake played the very fitting “Flannel” from Man of the Woods before tossing the mic around to a few of his bandmates to do covers of Fleetwood Mac, The Beatles, John Denver, and Lauryn Hill.

Whether you were on the floor, or all the way at the top of the Amway Arena, no one could walk away from this show disappointed.”

The full band soon returned to the stage to finish out the night with a final set of hits. From “Rock Your Body” to the #metoo anthem “Say Something,” no song went overlooked. Although there was no formal encore, I could tell the end was near as Justin Timberlake pulled out one of his biggest new hits “Can’t Stop the Feeling.”

JT and his crew danced their way across the arena, from front to back while shaking hands along the way. Whether you were on the floor, or all the way at the top of the arena, no one could walk away from this show disappointed. I was so lucky to be given the opportunity to cover this show and have a much needed surprise night out with my wife. <3