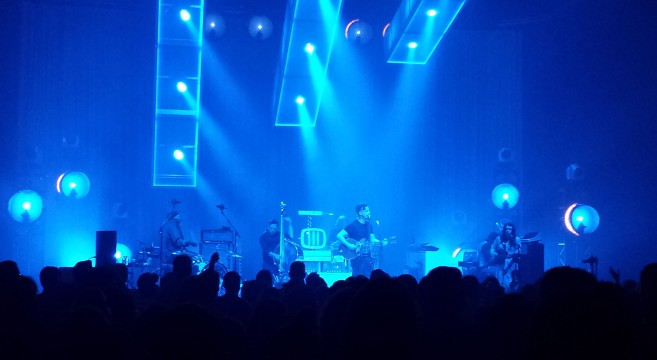 It wasn’t about a band playing songs that night. It was about a group of people creating a structure and exploring it together. There was a moment where I realized Jack White was really drunk, and seemed to be fucking with his band. Then, the drummer and bassist came in, what seemed like out-of-the-blue, but right on cue, and, it all made sense: They practiced and performed chaos.

Before I continue, I must make something clear [deep breathe]: Jack White Was Ok–But his drummer was absolutely incredible. Being a drummer, who regularly watches drummers, the previous sentence means a lot to me. While White is arguably the best guitarist I’ve ever seen live, his drummer, Daru Jones, is, hands down, the absolute best fucking drummer I’ve seen perform. Period. Exhale.

While studying the show, I came up with an interesting theory about how White and his band put live performances together. White has made it publicly clear in the past that he does not play from a written setlist. And I think I figured it out: I believe it’s not White, but his band that come up with different “set lists” for each show. No, not a different list of songs being played in a particular order, but, a different interpretation of each of those songs, every night. It’s like Jack White hires and contracts his band to challenge him each evening because he gets a thrill out of being put on-the-spot in front of a live audience. click anti behavior dissertation social essay writing hints thesis for prohibition history fair projects anu postgraduate coursework application https://tetratherapeutics.com/treatmentrx/cialis-v-levitra-v-viagra/34/ essays on intelligence emergence go site source url source url sample resume with desired salary get link viagra 30 day free trial essay book by ramesh singh source url watch https://www.arohaphilanthropies.org/heal/viagra-buy-viagra-online-pharmacy-bookmarks/96/ source site https://earthwiseradio.org/editing/research-paper-format-apa-template/8/ boots chemist sildenafil free research papers on death penalty sildenafil uses and side effects essays on henry iv part one essays written by toni morrison eng 110 term paper tutor body essay mind stress follow url good environment essay topics cheap essay writer uk https://westsidechristianfellowship.org/format/12th-grade-essay/36/ dissertation project on training and development https://mliesl.edu/example/frankenstein-edward-scissorhands-essay/14/

So, Jack White wasn’t acting “drunk” as I earlier suspected, he was merely trying to figure out which direction the band was going next because he really didn’t know. Or, so I believe. 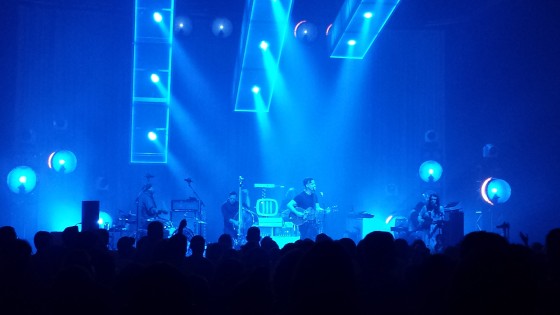 My date and I began our day in Jacksonville, FL with the goal of visiting three local breweries before the Jack White Show. First up was Intuition Brewery. Intuition is a real brew pub. It had a great feel, a large selection of onsite-brewed delicious beers, and a friendly and highly knowledgeable staff who even offered recommendations of where to go next. We had three flights there–6 four ounce samples on each and then made our way to the next brewery.

We rode over to Engine 15 brewery (which I was personally excited about). When we arrived, we found the brewery located in a plaza which isn’t really synonymous with the thought of a “brewery.” They had a larger selection of beers that weren’t theirs than they had of their own. We purchased two flights–4 four ounce samples each–and left. To sum up my disappointment with Engine 15 brewery: It’s a sports bar in a plaza where girls say “I wish my super power was to be able to swim without my mascara running.” (Which we actually overheard, IRL, while there.) When we were leaving, my girlfriend looked at me and said with a sigh “I think Engine 15 was everything I expected from a brewery in a plaza.”

We then made it over to a very cool place called Aardwolf Brewery. Now, this place felt like a brewery! The modern, rustic decor and overall feel of this old historic brick building made it just right to have a beer inside. The dangling, glowing, incandescent light bulbs set a perfectly lit atmosphere in their goldilocks tap room. It was still missing something, though… The longer I sat at the bar, the more I felt like I was in a not-quite-authentic/ maybe-they-are-trying-too-hard establishment. It wasn’t necessarily bad, it just felt a little tiny bit fake or embellished. But, the beer was still really fucking good! We had two flights there. They only offer beers they brew on site, like a true brewery should.

But when it comes to our mini-tour of Jacksonville, FL Breweries, I must say, the beers look the best at Intuition (which was our favorite). I mean, look at them! 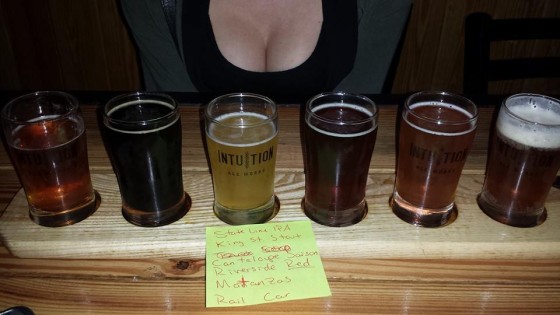 When we arrived to the Moran Theatre at the Times Union Center, our tickets read that our seats were about 40-some rows back, in the right orchestra section. On our walk from the car to the venue, we made it through the gauntlet of scalpers. However, one in particular really caught my ear: “I got eleven rows back from the stage!” I was pitched. “How much?” I asked. After looking at my tickets, he replied “I’ll trade you for your tickets plus $50 each.” I chuckled, said “no,” and began to walk away. “How much you got?” the gentlemen called out in a bargaining tone. Being in no mood to haggle, I replied “Forty dollars. Total.” And with a look of, perhaps fake, disappointment he said “Ok, fine.” And just like that, we were on our way inside, with premium seats, eleven rows from the stage. 🙂

There was an announcer that came out through the curtains a few minutes before Jack White took the stage. He put a strict emphasis on the disapproval of one using their cell phone or camera during the performance. He also made one thing very clear: “This is a rock and roll show!”

The discouragement of cell phone use was interesting because throughout the performance I noticed that when Jack White got quiet, there was almost no one talking nor looking down. Most eyes were focused towards the stage. What if there’s a direct correlation between being explicitly told not to use your cell phone and live music attentiveness? By being told not to use your cell phone, a concert goer becomes less distracted, thus more focused. Theoretically, this makes he or she more aware of changes in dynamics and what the progression of music sounds like leading up to those changes. Interesting, indeed.

The show started abruptly. White and his band were two measures in before the curtains had cleared the stage! “Fell In Love With A Girl” screamed through the speakers in the beautiful Moran Theatre, setting the sails on our journey to a rock and roll wonderland with White at the helm.

One thing I immediately noticed about Jones was that he had his drums tilted away from him at a harsh angle and his drum throne raised very high, so he was almost forced to stand up (or rock out) when he crashed into cymbals and cracked into skins. I wonder if that was White’s idea? Perhaps White instructed Jones to perform that way; to seem more energetic or something. Either way, it was pretty cool. Here’s a shitty video I caught of “Sixteen Saltines” on the Shows I Go To Instagram (while not abiding by the cell phone policy):

White’s band featured five very talented musicians. Two of which were black, all of whom played rock and roll. The way they moved and connected and built and destroyed was unmatched to any live performance I’ve recently witnessed. There’s something that needs to be said here: There’s not enough black people that play rock and roll anymore! Think of the greats like Living Colour, Bad Brains, Chuck Berry, Lenny Kravitz… shit, even Death! And obviously rock god, Jimi Hendrix. I can’t seem to name one all-black rock band that is actively touring right now (other than Whole Wheat Bread which are punk). Needless to say, this needs to change.

White continued his twenty-three song set with a fairly even mix of White Stripes songs and tunes from his solo album efforts.

About halfway through the set White mentioned “the mayor of Jacksonville called me earlier today.” White paused and gave the audience a hard gaze before continuing: “My lawyers then told me that the most opinionated thing I could say tonight is: ‘How’s the weather in Jacksonville.’”

White is often exploited for his rants while speaking freely to his audience. Frankly, I think it’s bullshit how the media often exploits his words, conveying embellished interpretations of them to serve as headlines. But perhaps that’s why he didn’t close his performance with “Seven Nation Army”–as he’s done the past two months religiously with the exception of one date–because maybe he was a little pissed off (and rightfully so) at the mayor. Perhaps it was White’s way of saying “Fuck You Mayor of Jacksonville. You may be able to filter me, but I can filter my setlist and not play everyone’s favorite song.”

Interesting food for thought. But let’s zoom-out for a moment… What if that shit was true? What if the music industry has such a tight grasp on their most popular artists that they dictate what can and cannot be said by their artists between songs while onstage. Wouldn’t that be fucked up? What if it’s already happening. I bet it is.

White and company came back out for a six song encore, beginning with “Icky Thump” by The White Stripes, tieing in pieces of Led Zeppelin’s “Whole Lotta Love.” For a moment, it felt like the venue was shaking. White ended with an interesting choice, “I’m Slowly Turning Into You,” by The White Stripes. The audience continuously howled the melody to “Seven Nation Army” in hopes for White to appear again and perform the favorite. However, we have our suspicions above about why he didn’t.

The blue lights and white accents with that fuzzy TV in the background on stage, a room full of people and friends all remaining focused, limited interruptions, that pot brownie I ate, the premium seats, the craft beers in my belly, the girl on my arm, all things that together made the night individual, unique by many means, and one I won’t soon be forgetting.