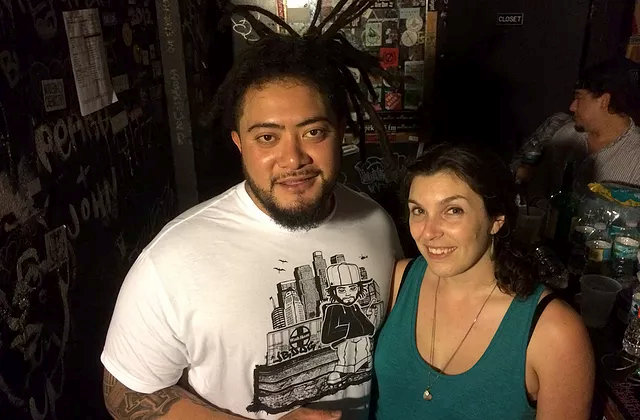 J Boog appear at the Social in Orlando with long-time friends Jemere Morgan (son of Gramps Morgan) and Jo Mersa Marley (the son of Stephen Marley and grandson of Bob Marley). The Recording Academy recently bestowed a huge honor on J Boog this year,  nominating him for a Grammy under Best Reggae Album. I feel honored to interview him before the show on his tour bus.

J Boog maintains a relaxed demeanor and we talk about his Grammy nomination, life on tour, and his passion for Reggae music. You can check out the full interview below or on my podcast, Mind Altered Media

I thank J Boog for his time and head to Gringos Locos for some tacos with my boyfriend, Dylan, before the show. Once inside The Social, we fight our way to the pit where the crowd is thickest. Jemere Morgan takes the stage first with his single “International Love.”

Jemere appears in a “Ganja Farmer” hat. He borrows fellow performer Jo Mersa Marley’s backing band, The Trinity, which consists of keys, bass, and drums. And holy bass, Batman! The room is slick with sweat as everyone bounces to the booming bass line.

As a second generation musician, Jemere looks right at home on the narrow stage of The Social, spreading his message of unity with “Try Jah Love.” The band chants every one of Jemere’s songs with a funkier vibe than I’m used to hearing in Reggae, which Jemere attributes to drawing off the crowd’s energy.

They launch into a danceable version of “Celebrate Life,” blending Reggae with a playful-pop vibe. The Trinity employs an advanced technique reserved normally for jam bands. It’s a testament to their undeniable chemistry. The Trinity plays through Jemere’s “Anything You Want” for the ladies and gives “Neighborhood Girl” the slow jam treatment.

Jo Mersa Marley takes the stage next with a cover of his grandfather Bob Marley’s “Don’t Worry About a Thing.” He announces his daughter’s first birthday on stage and plays his song “Sunshine” to honor her.

Quickly enough, he switches it up and scorches the dance floor with “Burn It Down” and another cover of “One Love.” Jo Mersa’s covers of his grandfather’s music are so on-point, the only thing missing is the original Wailers singing back-up.

It speaks to the power of Bob Marley’s music that performing it live inspires such camaraderie, not only between the musicians playing the songs but the crowd, too, as they sing along to every word.

J Boog is next with his backing band, The Hot Rain, complete with two back-up singers, a guitarist, drummer, keys, and bass to the stage. They open with “Nuh Wan Dat” off his latest album, Wash House Ting. He rocks the mic, clad in a plaid shirt with his dreads neatly pulled back. He launches into “Good Cry” and continues romancing the audience with “Every Little Thing.”

J Boog makes sure everyone is bumping on the floor with “Sunshine Girl.” Holding the entire audience in his sway with his mellow croon that speaks of love and the green.

The spirit of friendship and family pervades the whole concert. Getting along just makes for good music and this really shines through as the musicians groove through their sets.

I see an opening to sneak next door to the Beacham, where Atmosphere is performing. Sometimes you just have to impulsively bolt through that door you know? I run past security and hide in the crowd.

The difference between the two shows cannot be more pronounced. While The Social is funky with both sweat and music, the Beacham is relatively calm and cool.

I walk in just as they tease a rendition of Pearl Jam’s “Jeremy’ followed by their song, “Sunshine.” Sunshine seemed to be the theme of the night and there’s no better place for it than in two hot Florida venues.

The show ends and I meet Dylan outside. He is kind enough to fill me in on what I missed at the Social. The Hot Rain was rejoined by The Trinity and they jammed out, thanking the crowd with a bow.

The dance party continues for a while as I chase down Jemere Morgan at the back entrance and get a quick picture with J Boog. His relaxed demeanor now replaced with pure energy. All of the performers are incredibly open and kind, and their show is fire. Listen to my entire interview with J Boog on my podcast, Mind Altered Media: