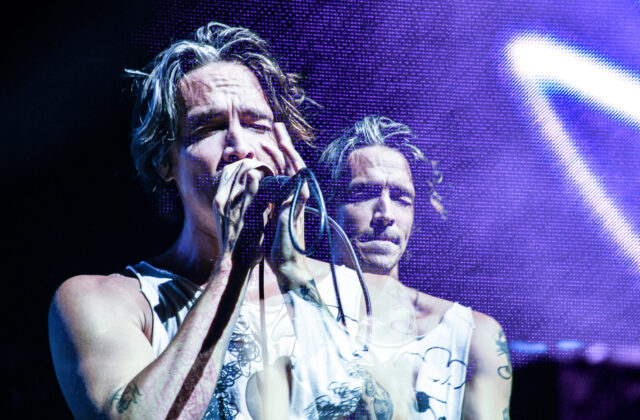 The harmonics at the end of the song “Warning” slowly echo in my head as I’m driving to St. Augustine. I hope they play it. Incubus had been posting videos of them rehearsing at the St. Augustine Amphitheater the day previous to the show. This is their first show in 20 months!

My heart’s beating fast. I think maybe it’s in synch with everyone’s. In 2019 Incubus celebrated 20 years of the album Make Yourself with a 20 year anniversary tour, and then they took 20 months off, as the world refrained. Here we are, 20 months later, and it’s their first show back. Maybe they planned on taking the time off anyways? Either way, today we celebrate 20 years of the album, Morning View—as a whole, my favorite Incubus album—released in 2001 (damn, does that make you feel old?).

Morning View was channeled in a house on the beach. The house was on Morning View Drive in Malibu, California. Before smartphones and Instagram. Before Facebook and Facetime. Connected to the earth and the ocean which holds us in place, in faith, connected to each other, all sisters and brothers, and connected to ourselves—the only thing we truly, temporarily own. I’ve always been fascinated by the making of this album. It was real; profound. I imagined it being made between trips to the beach, usually short walks. Organic is synonymous. Natural. Harmonious. Felt-out… Morning View sounds like an album created in a room where everyone was channeling spiritual art together through heightened consciousness. The kind which begs you to close your eyes when you write. It’s peaceful. There was probably a lot of cannabis, as well.

Carolyn and I haven’t seen each other in almost two years (she’s taking photos tonight, and she’s one of the best photographers I’ve ever met, and a dear friend). We meet at Sarbez (which IFKYK) and I have a grilled cheese that fills an empty spot in my soul in which only a Sarbez grilled cheese can fill. I actually had two—more on that later. We arrive at the venue early and meet the new person kindly taking care of us media people. He’s blonde and kind; sharing with us a warm smile, which we’ve missed dearly. The sun is setting.

St. Augustine Amphitheatre (or, THE AMP) is one of my favorite venues in the world—no, I likely haven’t been to your favorite venue, but you should come here (if you haven’t been), and then we’ll talk. We’ve always loved the people who work here. SIGT started as a small baby blog writing reviews like these and progressively became a home for many people who wanted to document their love for music. St. Augustine Amp (owned by the SJC Venues—managed by the St. Johns County Parks & Recreation department) has always been partially kind to SIGT. We help spread the word about shows we think are cool, they help us access the shows we love and want to document. It’s symbiotic. We haven’t done this a real long time. I am a little nervous to write this review. That’s good, right? There is no opener. José, Michael, Ben, and DJ Kilmore walk onto the stage and start to feel each other out with a little warm up jam intro. Brandon comes into my focus when they transition into the first song of the set, “Nice To Know You.” “Better than watching Geller”—an Israeli-British illusionist, magician, television personality, and self-proclaimed psychic, known for, well…—“bending silver spoons” spills into my ears in a voice I find so familiar. It’s dreamlike. There is so much good knowledge to uncover in Morning View. I haven’t felt the way I feel today in so long, however, it’s not hard for me to specify why—I fvcking missed concerts. I can’t scream this loud enough, nor feel complete relief. It’s like your dog being stolen and getting them back two years later. The emptiness is devastating. Honestly, the thing which got me through the concert void, was my actual dog. He’s a boxer dog. His name is Ali. I adopted him from my good friend, whom I consider a brother, Evan Taylor Jones. Ali is eight.

The guitar intro of “Circles” lifts us up. The bass drum and bass guitar are so tight and punchy together throughout this song. It makes it so heavy. They extend the jam at the end of “Circles,” instead of the album version, omitting the singing, “round and round and round and round!” You can see they’re playing fluidly, subtly remembering “this is what we do.” It’s been too much time since I’ve felt the bass move my shirt. I failed to remember how much I sweat at shows. Here comes the intro of “Wish You Were Here.” There’s an iconic shot of Brandon singing in this song’s music video, with his shirt fully unbuttoned, waving past his hips. He didn’t know or care to know about how he looked. He was just feeling. Seems to be the theme here. And, no, it’s not just as phase, which they play next and call us to respond with our best a capella “Phase.” Incubus humbly ambled through the first four songs of Morning View in-order to open their set. “Are they going to play the whole thing,” I think to myself. Number five happens to be my favorite—”11am.” They didn’t play it. They switched it up here (full set list below). Frankly, they could have played the whole album, twice, and I wouldn’t have wiped the smile from my big dumb face the entire time. They bop into “Anna Molly” and light us up. I love watching Michael Einziger play the guitar. It’s a combination of confidence, purposefulness, his hair, and the mathematic equations bubbling around him while he feeds secret formulas to his pedal board. The man is a genius.

“Meet me in outer space. We could spend the night; watch the earth come up.” That shit blew my mind when I was in high school. I can’t believe I was in high school when I heard it for the first time. It seems so long ago. What is time? “Stellar” is one of those songs it’s seemingly impossible to grow tired of. They then dip into a newer song, “Glitterbomb” before taking us back to Make Yourself with “The Warmth.” Einziger’s delay pedal leads through the speakers before Brandon takes charge. “Don’t let the world bring you down. Not everyone here is that fucked up and cold. Remember why you came and why you’re alive.” They ironically pick us back up with “Sick Sad Little World,” bring us back down with “The Original,” then ease us into “Drive.” I’ve loved Incubus since I was a kid. I think I’m still a kid, in many ways. Playing the drums José’s way with my friend Jordan in high school was my first lick of the salt block of freedom—music gifts freedom. I’ve played music for over 20 years now. “Drive” was the first Incubus song I learned on the drums.

They debut a new song, “Karma, Come Back,” from the Trust Fall, Side B EP. This is their first time performing the song live. It’s certainly growing on me. They bring us to a song from Light Grenades, “A Kiss To Send Us Off,” which I haven’t even listened to in over a decade. It holds up, but I was too stuck on the previous three albums to give it the proper care back then. Two more are played from Morning View—“Are You In?,” and the set closer, “Warning,” both of which are tied for my second favorite song on Morning View. It’s so nice to be writing again. Don’t get me wrong, I write shit all the time, but I never share it.  This is something I’m writing with the intention of it being shared. But, you always must write as if no one will read it (at least in my head). I’m so stoked they played so much old shit. “Don’t ever let life pass you by.” It seems safe to say we’ve all felt like life passed us by a little lately. Are we floating in this cosmic jacuzzi? Are we like frogs oblivious to the water starting to boil? All I know is these eleven words below in the “quote” should be shared with every generation of conscious beings until we inevitably become robots. We don’t deserve Brandon. I’ve missed shows. Thanks for reading.

“I suggest we learn to love ourselves before it’s made illegal.” Oh yeah! I made a Sarbez sandwich out of the night—grilled cheeses both before and after the show (can you tell I love them?). My first was on sourdough, with Sarbez sauce (spicy mayo), gouda and cheddar cheeses, bacon, hash browns, and avocado. My post-show sammich was on rye bread, with mozzarella and cheddar, shaved steak, and Sarbez sauce. Go get some.