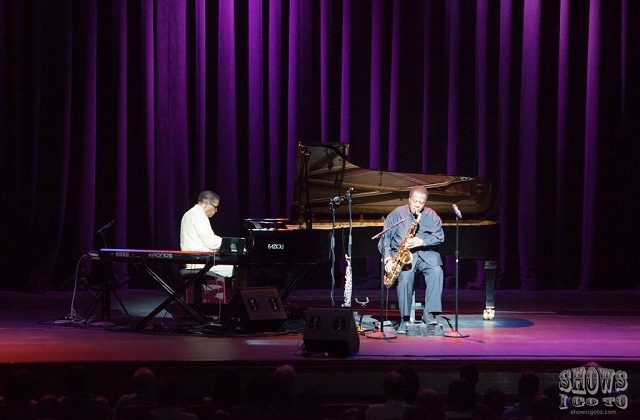 Throughout the night and the weeks leading up to the show, I was constantly reminded of the movie Tommy Boy and its opening scene. Chris Farley’s character Tommy is taking a final exam for History 201 at Marquette University and there’s a fill-in-the-blank question that reads, “Thomas Jefferson, James Madison, and _______ Hancock, were all framers of the constitution.” He stares away with a blank face before smiling with a confident grin and fills in the blank “HERBIE” with all the confidence in the world. Later in the movie, David Spade’s character Richard asks Tommy for his John Hancock on some papers, of course referring to his signature, to which Tommy replies in a patronizing tone, “John Hancock … it’s Herbie Hancock.” When that movie came out in 1995, I didn’t know who Herbie was so I never fully got those jokes until many years later, and would not see the musical legend until this night at the Dr. Phillips Center.

Hancock and Shorter enjoy a profound relationship that takes a wide trip through jazz history. They had leading influential roles in the classic Miles Davis quintet of the 1960s. They would soon go their separate ways into their own career orbits, reuniting here and there throughout the years. The pair are two in a small handful of world-renowned jazz artists who have chosen to live in Los Angeles, settling there in the early ’70s and sharing the same Buddhist practice.

Over five decades and 14 Grammy Awards, Herbie Hancock has transcended genres. There are very few artists in the music industry who have had more influence on acoustic, electronic jazz, and R&B than him. Wayne Shorter is a jazz innovator who is still influencing a generation of musicians and fans as a humble and timeless saxophonist and composer in the pantheon of modern music. Since his emergence in the 1950s, his path has restlessly personified frequent exploration and imaginative energy.

The show began with many notes, and also many rests. At times, they would briefly step into a groove before treading back lightly. Hancock started the show on a grand piano and had the reigns most of the night with Shorter adding his gentle touches. The two cautiously tossed expressions back and forth developing a harmonious connection to the music and ultimately responded to each other nicely. After the first song, it was apparent this was going to be a wild improve set of free jazz.

There were a few moments where some of the audience were clap happy and believed the song had ended, only for Hancock and Shorter to continue on with the current piece. At other times it felt like they were pressured into ending a piece due to those clapping moments, or maybe the song was actually finished. Hancock would switch back and forth between the grand piano and synthesizer, the latter allowing him to add psychedelic sounds and obscure beats. One of the sample sounds used included a beat box effect with record scratching and hip hop phrases being played on the keys. A drum machine began to beat out an insistent rhythm, and the reflective tone momentarily vanished. There were moments that the music became rushed or livid, Shorter shouting out haunting sax sounds, and in an instant, the two would bring it back down to a mellow reflective manner.

This show experience was spiritual and provided an open mind of art and music interpretation. It did seem like a few people did not get what they were expecting and left early. Maybe they were expecting songs with simple beats or singing. Instead, they got a no holds barred improvised set with the two complimenting each other while playing at their own pace. However, it was readily apparent that they played music together just like two old friends talking and joking to each other. We were just flies on the wall.