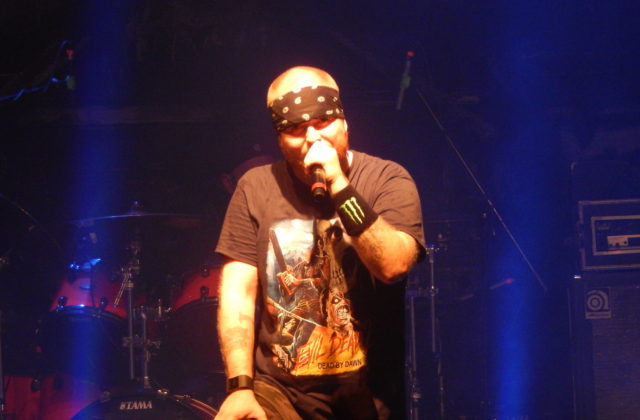 As a lover of heavy metal music, I consider listening to Hatebreed as my own personal form of self-empowerment therapy– there’s no stopping myself from headbanging. Their music is heavy and crushing, but lyrically their songs encourage using any negative internal energy to fuel positive personal growth and empowerment. Hatebreed is currently on tour in support of their latest album, The Concrete Confessional. I got to see them on October 24, 2016, at State Theatre in St. Pete.

Devil You Know, a relatively new supergroup, opened the show. Formed in 2012, this band quickly garnered notoriety in the world of metal music, going on to win the Metal Hammer Golden Gods award for Best New Band in 2014. Although they only had a thirty-minute set, they got the night off to a totally metal start. The lead singer paid homage to Tampa Bay, Florida as the birthplace of American death metal back in the 1980’s. DevilDriver was up next. I was blown away by this band — DevilDriver certainly gained me as a fan after I saw them live. These guys kicked ass! They played for forty-five minutes, and every second of it was awesome. Their live sound is the epitome of what heavy metal is. Their lead singer was very engaging with the crowd and sang his heart out as the band shredded all around him.

There was electricity in the air as the crowd chanted “Hatebreed! Hatebreed! Hatebreed!” Their performance absolutely tore the roof off the venue. I have never witnessed the brutality I saw happening in the pit before me on this night at The State. Their set included every song that I wanted to hear with the exception of “Doomsayer” (I know they cannot play them all). The crowd’s ears were pulverized with defining songs such as “Destroy Everything,” “Everyone Bleeds Now,” “In Ashes They Shall Reap,” “This Is Now,”’ and their new crushing hit ‘”Looking Down the Barrel of Today.” Hatebreed is a band whose studio sound is really hard, if not impossible, to duplicate live. But the band members fed off the crowd’s energy and were unrelenting in their ferocity, pumping out that glorious metal that we were all there for. Their set only lasted an hour, leaving the audience wanting more. After the show, I heard many people in the crowd comment on just how killer of a show we had just witnessed.

Overall, it was a kick ass show. I love the positive message in Hatebreed’s lyrics. If you are a heavy metal fan, this is a band you have to see live. The intensity of their music is magnified ten-fold at their live shows, more than you could ever imagine by just listening to them. I would go see Hatebreed again in a heartbeat. \m/