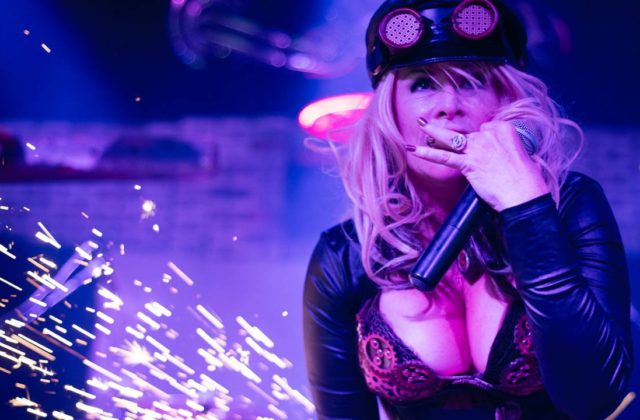 To say that attending a Genitorturers concert will be a wild evening is an absolute understatement. I have been following this band since 1992 and have seen them at least thirty times live, and they are without a doubt one of my favorite bands and put on some of the wildest live performances one could ever experience. My friend’s band opened for them back in 1991 and they invited me along to check out this “incredible band,” and I was hooked on their sound and mesmerized by their stage spectacle from that first show all those years ago.

Their music is a blend of seductive, almost trance-like industrial metal with many songs having that bone crushing guitar crunch that I love so much. Over the years, I have been nearly obsessed with just how entrancing their shows are, hardly ever missing the chance to see them again. I have never left one of their shows disappointed and the show last night (October 22) at the State Theater in St. Petersburg was no different. Their stage show has toned itself down some over the years as they do not do quite the torture techniques as back in the day, which I think is due to local ordinance reasons as their St. Petersburg shows are always tamer than other locations I have seen them – I saw Gen tie her slave of that evening into a chair and sew his mouth shut so he could not scream before she really went to work on him. You won’t see that in St. Petersburg.

Over the years I have seen some really interesting, far out, odd and kick ass bands that I had never heard of open for Gen and this time was no different, as I would be exposed to a band I was not familiar with. Opening the show was The Offering who were embarking on their first ever tour. After their first two songs of the night, my friend and I agreed they sounded and reminded us of a death metal sounding Judas Priest. Two songs later, we had a good laugh as they started into a cover of Judas Priest’s “Painkiller.” They definitely had a heavy sound, I just had some issue with the vocals going between death growls and high pitched sections of the songs here and there – pick one or the other, there was no in between. While I enjoyed just how heavy this band was musically, I did not think switching between extreme sides of vocal pitch did anything to enhance or add to their sound. I thought they would sound better sticking with more death metal like vocals.

The Genitorturers hail from the Orlando area and played around Tampa Bay as many as three times per year back in the day – hence me having seen them so many times. This show was celebrating thirty years of Genitorturers Live and Lewd and they played a literal greatest hits set that spanned their entire catalog. Gen and the boys treated us fans to the likes of “Cum Junkie,” “Razor Cuts,” “Take It,” “Devil In A Bottle,” “Terrorvision,” “Liar’s Lair,” “One Who Feeds,” “House of Shame,” (all some of my personal favorites of theirs), and closed the show with a cover of AC/DC’s “Highway to Hell.” Acoustically, the vocals could have been a little cleaner but I thought overall they sounded fantastatic. But how the heck do they play a show celebrating their lewdness and NOT play their cover of The Divinyl’s “I Touch Myself?” That was a little bit of a letdown given the show’s theme.

Compared to the shows of yesteryear, the devilish erotica aspect of the show was only mildly pushed to the brink of any local nudity laws and not past. While I miss them bringing their old torture rack on stage, it is still an interesting stage show as it is hard to take in just all that is happening at once between the musicians jamming, the scantily clad stage performers being “punished,” and the different characters Gen assumes for different songs. The one outfit that always stands out of the night is her top with the hoses attached to her breasts and sides where Gen encourages the performers or sometimes even those close in the front of the audience to embrace her and to “nurse upon my body … till you suckle from the one who feeds,” unfreaking real I tell you. And of course no Gen show would be complete without some sparks flying across the stage from some high-speed grinders on metallic lingerie, both pelvic and pectoral, and the self-face grinding on a metal facemask, crazy stuff.

For me, beyond their tunes, the most interesting and anticipated part of the show is the human suspension. For a twist Gen had both a male and a female hanger, each adorned in masks of 2016’s two presidential contenders. At first, Gen hooked the two of them together back to back with a harness made out of bungee cord-like material and sent them both off to opposite sides of the stage. — it looks so freaking painful seeing their back skin pulled as such. Then each took a turn being suspended from a line lowered down from the ceiling, with Gen berating and mock threatening each with her infamous “Scars and Stripes” (fake) shotgun, before rising them up and spinning them in circles swinging out over the crowd and back across the stage. It hurts just even thinking about it as you can see their skin being stretched, but fascination (and some kick ass metal) keeps me coming back show after show.

Many thanks to the Genitorturers, their stage performers, and The Offering for yet another unforgettable evening. \m/