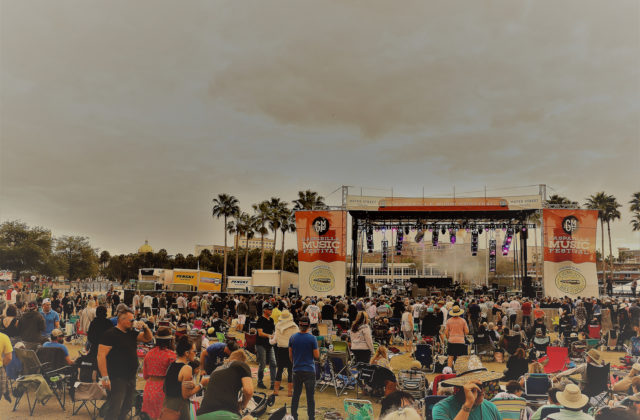 Gasparilla Music Festival is a giant waterfront party thrown by Gasparilla Music Foundation the second weekend of every March. GMF is a nonprofit organization that was formed in 2011. Paving the way for the Tampa music scene, this foundation is responsible for enriching and promoting music, food and most importantly: music education and lessons for children. Providing instruments and scholarships for music students in the area is great for the community! The 2020 lineup is filled with talent on a beautiful weekend.

I arrive to Curtis Hixon Waterfront Park and Kiley Gardens Park to find the festival already in motion. I enter the park on a bright and sunshiny day! Tony Tyler Trance from St. Petersburg is the first music I absorb and wow is it good! Performing Derek & the Dominos and their 1970s rock. As soon as I hear Tony’s guitar, my spirit takes flight on “Little Wing.” He and George Pennington (Displace) tag team the song with the perfect pace and feel on their guitars. Tony’s squeals and moans for “Layla” filling the park with soul and love. What a great start to the day.

The Nude Party is a rock band from Boone, NC. They remind me a little of The Rolling Stones. They play a blues song and rock the place out. People are having a great time at this splendid springtime festival. Touching on a few different rock styles, these guys are impressive and fun! From there we scope out St. Lucia’s set, which didn’t go as planned. A few songs into the set and a noticeable hum is in the air but eventually they fix the problem and elevate us. I did however enjoy the jazzy bass-and-drum combo during the switch. The sun begins to set on the first night of Gasparilla 2020 and the temperature dips.

Big Freedia is the bonafied “Queen of Bounce.” She is the one-time host of the MTV show Big Freedia Bounces Back. Hailing from New Orleans, she has brought the bounce to the people. A largely underground genre, she exposed its greatness in 2010 with her album Big Freedia Hitz Vol. 1. I arrive to the set to find her on stage with a DJ rapping and bouncin’ her ass to the beat. Her dancers join her on stage in bright orange spandex while Freedia wears a ‘90s style multicolored jogging suit. The music is so intoxicating that everyone is twerking—even those who shouldn’t. Oh man, what a sight to see! Americans shaking their right to party up and down like there’s no tomorrow. She does a version of Juvenile’s “Back That Azz Up,” that sends the crowd into a frenzy. Now these people have their hands on their knees, some even twerking on each other. Oh! That group has three asses doing their best impression of maracas. This glitchy hip-hop is just what I need to have a blast! She also plays her track with Ke$ha called “Chasing Rainbows.” My favorite moment though, may have been when they stopped the music to play Whitney Houston’s “I Will Always Love You.”

I stop by one of the smaller stages to catch Demi Nova. She is a soul and blues singer who is accompanied by three backup singers and a full band. They finish a song and go into a jazzy number. I’m struck by the music and feel like I’ve heard it somewhere before. She begins to sing and it hits me! “Smells Like Teen Spirit” by Nirvana! Oh man, and it’s somewhat hidden as they don’t play the whole melody. I’m jumping up and down singing the chorus while everyone around me stares with big eyes. I don’t care. This song kicks ass and it’s jazzy to boot! I keep moving over to the main stage for Rival Sons. Their slower blues from Long Beach, CA stacks the crowd near the stage. Patrons dance and sing their great indie rock songs like, “Electric Man,” which is heavy and strong. Scott Holiday rocks a double-necked guitar and shreds accordingly. The sound is awesome and I come away from the set impressed by this Grammy-nominated band and their song “Too Bad.” These guys will soon be headlining festivals. Just watch.

De La Soul is a hip-hop group formed in 1988. Taking their own path, these three mixed in jazzy sounds and quirky lyrics to set themselves apart. Rarely performing, this set is going to be a treat. Unfortunately, the day of the show GMF announced that one of the rappers, Trugoy, wasn’t able to make the show and would be replaced by Brooklyn emcee, Talib Kweli. Owner of eight studio albums since 2002, Kweli is a badass substitute. They play “Dilla Plugged In” to promote the fact that a bunch of their beats are produced by the late J Dilla, a pillar in the hip-hop community. They hype the crowd and perform half De La Soul songs and a bunch of Talib Kweli’s music, including his hit single, “Get By.” I finish the night witnessing a solid performance by three-time 2019 Grammy award-winning (Best Americana Album, Best American Roots Performance, Best American Roots Song) Brandi Carlile. She comes out with a bunch of energy and plays to her adoring fans. She plays the songs “Raise Hell” and “The Eye” for the throng of fans. She caps off a great day of music at Gasparilla Music Festival. Saturday is another full day of tunes in Tampa. I arrive to the park just in time to catch the end of piano rocker Marco Benevento and his badass bassist, Karina Rykman. They are finishing a fun cover of INXS’ “Need You Tonight,” and I can’t wait to get inside and dance my butt off! I wish I would have gotten here earlier! After a visit to the beautiful beer garden, I get my usual spot in front of the sound booth for the instrumental progressive funk band TAUK. They open with “Horizon” and instantly I’m hooked. The dark, gloomy tones paired with long echoes from guitarist Matt Jalbert make their music hypnotic. A.C. Carter complements him so nicely on the keys with great harmony and spacing. They effortlessly navigate sections of complicated music without any lyrics. They play my favorite song “CMF 9000,” featuring a huge solo from Jalbert before they move into “App Thread.” They introduce the crowd to their new track, “Come On Now,” prior to a sizzling cover of Hendrix’s “Voodoo Chile” with drummer Isaac Teel singing. Finishing with “Friction,” this band is on fire! Don’t ever miss a TAUK show!

From there I head over to the main stage for supergroup, The Word. Steel guitarist Robert Randolph leads Luther and Cody Dickinson from North Mississippi Allstars on guitar and drums in an uplifting set of gospel and soul. John Medeski from Medeski, Martin, and Wood plays keys for the group, jazzing up each song with his style. Randolph tells the crowd “there is only one chocolate cowboy in this town” before they slide into their song “Chocolate Cowboy” from their 2015 record, ‘Soul Food.’ I’m loving the upbeat, daytime dance music. Fans shake their groove things as the band covers the Grateful Dead’s “Turn On Your Love Light.” What a wonderful show while the sun sets behind the stage. The minarets from the University of Tampa building are really cool to look at during the show. I take a break to socialize and meet new people before the main event for the weekend, Portugal. The Man. They come out swingin’ with a cover of “From Whom the Bell Tolls” by Metallica. They move straight into Pink Floyd’s “Another Brick in the Wall Part 2,” before fading into their original “Purple Yellow Red and Blue.” You have my attention Portugal. Off to a great start, PTM plays their hit song “Modern Jesus,” straddling that line between heavy rock and indie pop. They continue their impressive set with “Atomic Man>Gimme Shelter.” They nail the transitions and have my friends leaning over to tell me how much they like the music. People produce their cameras as the band begins their massive hit, “Feel It Still.” They return to the stage to play “Sleep Forever>Hey Jude” for the encore. Such an awesome set to cap off a great weekend. Even got to slow dance with my girl during “Holy Roller.” Gasparilla Music Festival holds true to their promise and delivers another stellar weekend of music, love, and beer.