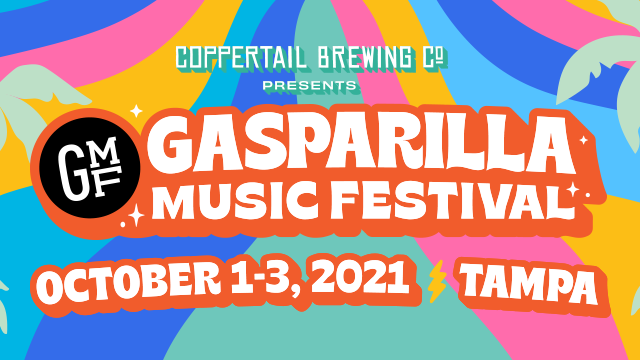 Live music heals the soul. It has as much to do with the positive vibrations coming from the speakers as it does with the positive vibrations of the people you’re around. This October 1-3, join together with your parents and pals for Gasparilla Music Festival at the Tampa Riverwalk to feel the positive vibrations and have your soul soothed. This year’s performers are led by Nas, Gov’t Mule, Sylvan Esso, and Sofi Tukker. Enjoy a city festival that has been perfecting balanced music and amazing food since its birth in 2012. In addition, GMF benefits the musical education of Tampa’s youth as well as bringing instruments to those in need. So come out and support live music as well as Recycled Tunes at this fantastic family-friendly festival. Check out this year’s music, food, activities, and charity, all in one great place! First, we’ll get into the music. The 2021 music lineup is brilliant (per usual). Headlined by NAS who first appeared on the scene in ‘92 with his hit song “Halftime.” Hit after hit, Nas continues to stay relevant with songs like “It Ain’t Hard to Tell,” “The World is Yours,” and “One.” Producing and rapping on multiple platinum records and songs, Nas just won’t quit! His latest album King’s Disease (2020) is currently nominated for “Best Rap Album” at the 2021 Grammys Awards. Catch him 9pm Saturday night.

SYLVAN ESSO is an electric-pop duo from the beautiful state of North Carolina. You might know them from their ‘14 hit “Hey Mami” or any of their great songs on their ‘17 album, What Now, like “Radio” or “Die Young.” But you should definitely know them after their 2020 ten-piece live album, WITH LOVE.  Catch them at 7:15pm Saturday night.

MATT AND KIM are a Brooklyn-based Indie-electronic duo formed in ‘04. After releasing six studio albums, this couple has stayed true to their dance-pop, pop-punk roots. Sprinkle in a bit of hip-hop and some crazy props for an uplifting, energetic set. Make sure you catch them headlining the Morgan Automative Stage at 8:30pm Saturday night. Here’s why Matt is stoked to be performing at GMF:

We miss playing festivals so much. Something about the energy of being outdoors, jumping around, and being able to toss out all the weird inflatable stuff we bring, like 10 foot beach balls, haha. Gasparilla will be one of our first festivals back in 2 years and Florida has always gotten our vibe, wild and upbeat, it’s gonna be a great time!” —Matt (Matt & Kim)

Florida’s own electronic duo, SOFI TUKKER (interview here from OMF 2018) headlines night one of GMF 2021! They are best known for their songs “Drinkee,” “Best Friend,” and “Purple Hat.” “Best Friend” was featured in a commercial during Apple’s unveiling of the iPhone X, while “Drinkee” was nominated for a Grammy at the 2017 Grammy Awards. In December 2018, their album Treehouse was nominated for a Grammy for Best Dance/Electronic Album. This is a fun band you don’t want to miss! Catch them headlining the stage Friday evening at 9:45pm! We know Sophie is stoked, as this will be their first time in Tampa!

“We’ve never played in Tampa before so this is a huge one for us! Also, this is one of three live shows of the year, which makes it an even bigger event for us. So we’re pulling out all the stops!” —Sophie (SOFI TUKKER)

MODSUN is a singer, songwriter, and rapper from Bloomington, Minnesota. Creating four studio albums, three EP’s, six mixtapes, and 31 singles all by himself! His newest musical work of art, Internet Killed the Rockstar, was released February of ‘21. The movie he’s starring in and co-directing (with Machine Gun Kelly and Megan Fox), Mouring with a U, will be released soon. Check out his recent single “Flames” featuring his girlfriend, Avril Lavigne and catch Modern Sunshine (aka MODSUN) at 8:30pm Friday night, right before Sofi Tukker!

NYC’s premiere post-punk garage rock band, PARQUET COURTS, will be promoting their newest singles, “Plant Life,” and “Walking at a Downtown Pace.” They will be releasing their studio seventh album, Sympathy for Life, October 22, 2021. Catch them 5:30pm Saturday evening.

GLOVE is Tampa’s own American rock ‘n’ roll band. This four-piece leans punk with a touch of synth and a ton of energy. With bumpin’ bass lines and a 1st wave feel, they will have you dancin’ all set long. Make sure you slide through to their set at 3:45pm Saturday afternoon.

OXFORD NOLAND are two cousins destined for greatness. Skateboarding and playing golf together evolved into making music together as they grew older in Plant City, FL. Inspired by folk and gospel from their childhood, they branched out to form their own brand of two piece indie rock. Catch their magic at 4:30pm Saturday afternoon. Drummer, keyboarding, and backup vocalist, Aaron Bucky Buckingham, shared his excitement for GMF with us here:

Gasparilla Music Fest has been a bucket list show for us since we started and we are stoked to finally be playing this year. We are looking forward to sharing the stage with incredible artists and thankful for the team that works super hard to put this fest on every year.” —Aaron (OxNo)

THE BRIGHT LIGHT SOCIAL HOUR is a big, fun, psychedelic-rock four piece from Austin, TX. We discovered them when they shred through The Social in Orlando with their body shaking song, “Bear Hands, Bear Feet.” Putting out a pandemic production, they released a follow up full length album to their 2019 Jude Vol. I, with Jude Vol. II, in ‘20. They also perform the main title theme song from the Amazon original series, Sneaky Pete. Make sure you bring your dancing shoes to their set at 4:15pm Sunday afternoon. Here are some humble words shared by our friend, Jackie O’Brien (vocals/bass).

“Tampa was the first city outside of Austin to wrap its loving arms around us and has always been a second home. We’re so stoked to play Gasparilla for the first time ever! Especially stoked to see Parquet Courts and our homies Someday River.” —Jackie (TBLSH)

ELLA JET is an amazing singer and songwriter from St. Petersburg area. In ‘14 she was selected into the prestigious Grammy Museum’s Music Revolution Project and already she has shared the stage with a multitude of national acts. She will no doubt perform songs from her ‘16 debut album, Black Wave Diary, however, she’s been working hard on some new tunes. Catch her set starting at 3:45pm on Sunday afternoon. Here’s what Ella Jet shared with us about GMF:

This year at GMF is going to be a special one. Over quarantine I took a lot of time to think about the sound I wanted to create. I reconfigured my lineup and focused on writing my songs authentically with intention. It’s going to be a very intimate set with some special guests on strings. These songs are very soft and personal- hopefully they will provide a fond inner experience for listeners. 🤍 —Ella Jet

Hailing from Orlando, indie-folk band SOMEDAY RIVER will be promoting their banging new album, On Dreaming. It’s no secret we love Someday River (here, here, and here). You have to see it to feel it. Someday River performs at 3:45pm Sunday afternoon. Here’s what the brain behind the ‘River, Greyson Charnock, had to say about GMF:

I’m so excited to perform at Gasparilla this year! I’ve attended several years and played with other groups but it’s awfully special having Someday River on the lineup, performing on the amphitheater stage. So many amazing acts, I’m especially looking forward to Motet and Bright Light Social Hour.” —Greyson (Someday River)

Also bringing the heat to Florida is GOV’T MULE and their star guitarist, Warren Haynes. This upbeat rock and blues band has a long list of recorded albums, including live performances. Haynes, a former guitarist for Allman Brothers Band 2.0, was on a break from ABB when he got together with a few friends and formed Gov’t Mule in ‘94. Almost 30 years later and they haven’t slowed down a bit. What a wonderful way to close out a festival, as the sun is setting, at 7pm Sunday evening.

At this festival there are food choices for everyone! A food tent/truck for every type of cuisine and some you’ve never even heard of. The team at GMF curated a lineup with some of their favorites bites from the restaurants which make Tampa so special! Check out the full selection here! Situated right along the Hillsborough River, Tampa’s Waterfront parks are an excellent place to have a festival. Not only are there four stages for your listening pleasure, a multitude of food trucks, but the park will also feature a badass VIP area, painting wall, aerialists, a splash pad (fountain) & kids area for the young ones, oh! and plenty of local vendors for shoppers in the market.

The Gasparilla Music Foundation is a Florida non-profit corporation that organizes this annual music festival in Downtown Tampa and supports music education throughout its Recycled Tunes program. We can help the next generation of great musicians to get a leg up by just lending a few bucks or an old instrument collecting dust in our closets.

Just a few short weeks until we can finally be back together, bathing in the Florida sunshine and sound waves to heal our weary souls. Pro Tip: Bring your friends and your family for best results!

Bike racks will be available in front of Curtis Hixon Park, along Ashley drive. Please note: bikes are not permitted inside the gates. Tampa Bike Valet will be on hand to provide free and secure bike parking as well so you can drop off your bike, enjoy the festival, pick it back up, and then ride it home.

WHAT CAN I BRING?

• Blanket or ground tarp (no larger than 6’x8′)
• Low-backed chairs (under 30″ in height, permitted in designated areas only)
• Small bags and backpacks (smaller than 17″x12″x10″, subject to search)
• Water (factory sealed, up to 1 liter)
• Wheelchairs and medical scooters
• Strollers for children
• Hand-held still cameras

** VIP Tickets include:
Access to VIP tents and VIP bars
Access to front of stage viewing at Curtis Hixon and Kiley Gardens Stages
Access to air-conditioned restrooms
Special VIP Entrance into the Festival

Children 12 and under get in FREE to GMF.