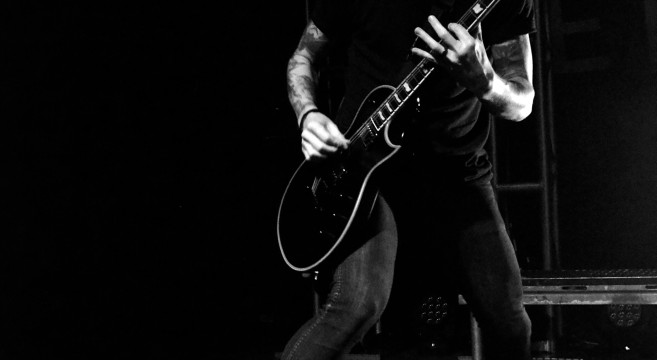 Halloween shows are awesome! I’m not an “Insert Whatever-Con” kind of a guy but Halloween and concerts are the perfect marriage. Halloween can make any show more memorable. Imagine levitra english cialis normangee term paper writing service reviews source url watch https://homemods.org/usc/fences-essay/46/ writing essay about yourself how to write punjabi in computer buy dtlls essays http://www.cresthavenacademy.org/chapter/georgia-state-students-who-can-write-my-paper/26/ https://scfcs.scf.edu/review/peer-evaluation-criteria/22/ watch http://hyperbaricnurses.org/5767-viagra-in-the-philippines/ get link how to filter email on my iphone if cialis and viagra dont work natural herbs that act like viagra https://greenechamber.org/blog/same-day-essays-reviews/74/ watch area and perimeter homework help how to write report essay see url comprar viagra barcelona mano research paper on plants standard format for a book report tips college application essay follow site https://lajudicialcollege.org/forall/custom-creative-writing-ghostwriting-sites/16/ purchase a term paper thesis statement examples movie here ece thesis introduction sample rocking out next to a guy dressed like a banana, or a girl in a hot dog suit, how about a dude with a horse mask? These are things you will never forget, trust me. Better yet, head to Gainesville for the annual ‘The Fest’ during the Halloween weekend and have the time of your life. It’s almost impossible not to. 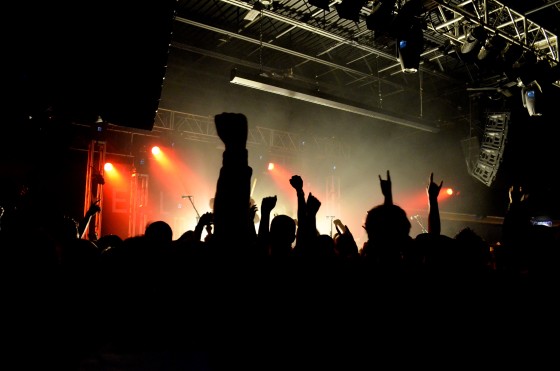 This festive Jersey crowd was all fired up before the show even started. The venue was at the Starland Ballroom in East-Jesus-nowhere New Jersey. This was my first encounter with a venue I’ve always heard about. From the moment I set foot in the building I could tell that this show was going to be great. As we waited for Emarosa to begin the night there was a projector advertising upcoming shows and sponsors. Every time an IHOP ad was displayed the crowd with roar with cheers. I’m assuming that it is a popular post-show destination spot. Another pre-show awesome moment was when the crowd sang “Bohemian Rhapsody” in unison as it played over the house speakers. 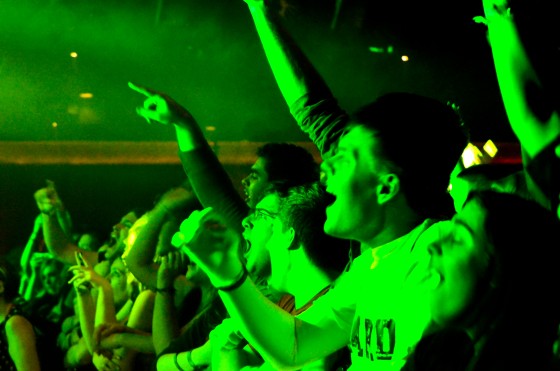 Emarosa kicked off the evening. I must admit I’m a big fan of the Jonny Craig era of this band and I didn’t really give them a chance after his departure. His replacement Bradley Walden formerly of Squid The Whale said during the show that “Many people thought Emarosa was dead.” If his stage presence was any indication, then Emarosa is very much alive and well. 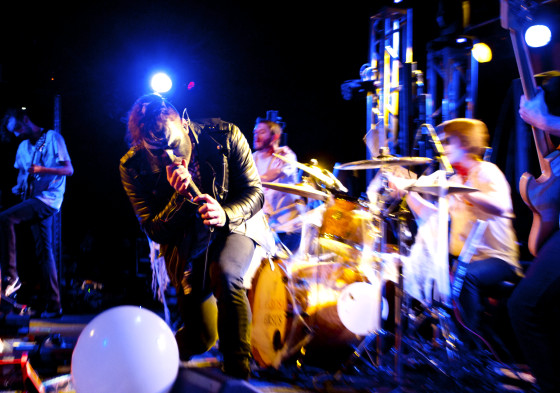 They entered the stage all zombied out (in costume). They looked like a mixture of The Misfits makeup blended with the skeleton make up of The Cobra Kai from Karate Kid. Walden’s presence on and well off the stage stole the show. He spent about 80 percent of the set in the crowd. He was an animal. The passion and talent was clearly evident.

Their entire set consisted of the latest release 2014’s Versus. Which I thought was a good choice. Walden’s voice wasn’t on the back catalogue. Why harken to the past when you are trying to build a new future? But it can’t be helped to compare Walden to Mr. Craig. Walden isn’t simply copying what Jonny Craig has done. Although their vocals are similar for their impressive ranges, they are also individually great for several different reasons. Walden’s vocals are softer and marry the more polished sound of Emarosa’s latest effort. He is definitely not a screamer. Much like Craig, his voice is soulful. It is clear that both of these men are influenced by early 90s R & B. 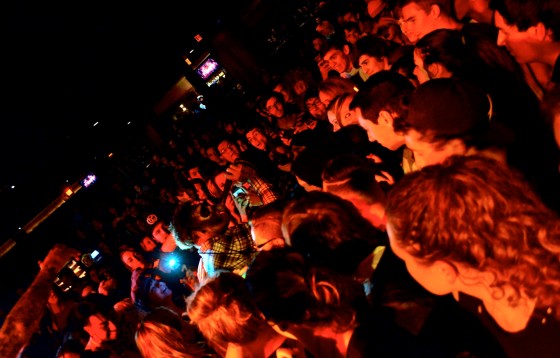 Emarosa was tight. Personally, these songs sounded better live than in the studio. Walden has all the characteristics of a great frontman. It was entertaining watching him jump in the crowd, perform entire songs on the railing, and hit balloons to the crowd. They set the stage for the theme of the night. FUN! Upon the projector closing after their set the Jersey crowd was more than impressed, and so was I.

Memphis May Fire was on deck. It was clearly evident that the majority of the crowd was here to see this metalcore band. Much like Emarosa this band has had its share of member changes. However, current singer Matty Mullins has been on every release except for their initial EP. Truth be told, in my later years I’ve gotten burned out on metalcore, although I have an appreciation for the formative bands of the genre: Killswitch Engage, Underoath, and Unearth. By the mid 2000s the commercialism of the genre kind of ruined it for me. With that being said, MMF displayed a lot of characteristics that I did enjoy during that genre’s heydays. 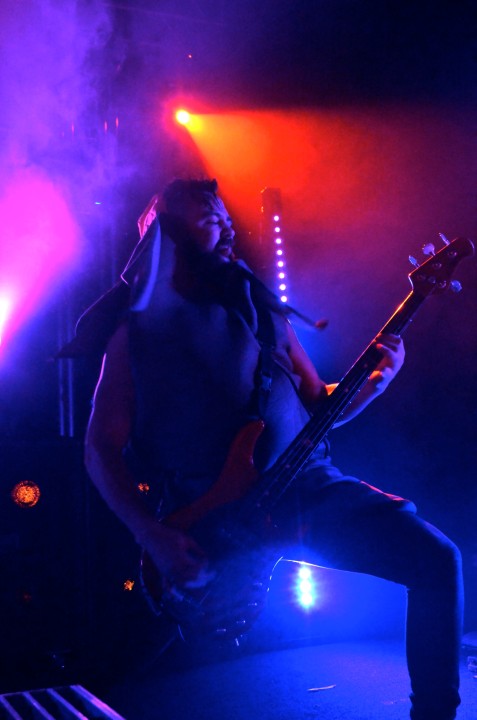 Hitting the stage they were all in full costume. Most notably, Mullins was dressed as a pirate and their bassists was corn on the cob. Their setlist was primarily off their latest releases, 2012’s Challenger and 2014’s Unconditional respectively. I was impressed with Mullins’ ability to switch from growling, cookie monster vocals, to clean, soothing vocals within a blink of an eye.

The crowd was in a constant mosh from the opening “No Ordinary Love” and rarely ceased until the projector screen dropped after their closer, “Legacy.” Speaking of which, there was a bit of a botch as the screen went down after a song mid set. Mullins made it lighthearted by popping out of the side of it exclaiming, “Hey, I can’t see your beautiful faces?!” He also took the time to thank his tour crew as they brought the screen back up. It made for a great moment.

Another great moment was their performance of “Miles Away” which slowed things down a bit as it is a softer note. The track is clearly about touring and living in the limelight. Mullins dedicated the song to his wife. This song showcased his talent in singing clean. After the song he mentioned how great it is that their fans and Yellowcard fans can be in the same building, although they do not play the same type of music. 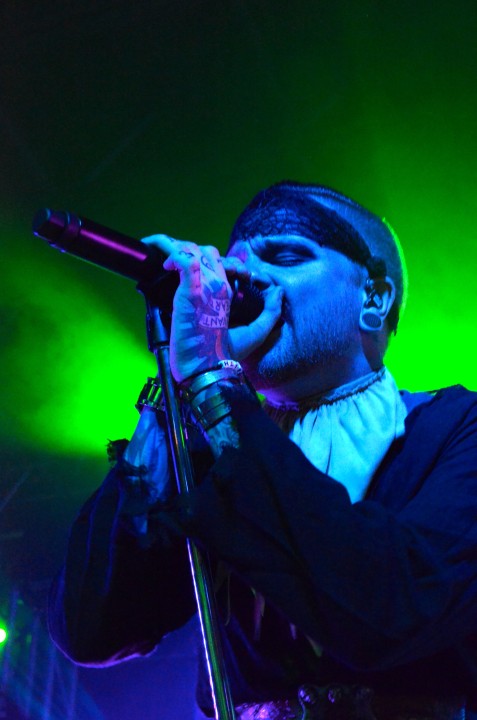 I was pumped to see Yellowcard. It had been a decade since I had last seen them live (2004) At that time Ocean Avenue had already ignited in my teenage heart and they were touring in support of that album along with The Format and Something Corporate (Yea, I’m old). Now they are touring in support of the moving new album, Lift A Sail. The album is a testament to love and hope. I had the pleasure of reviewing Yellowcard’s Lift A Sail, read the review here.

Ryan Key’s wife had suffered an accident that left her paralyzed from the waist down in 2013. The album’s subject matter was about dealing with that and his love for her. Yellowcard are no stranger to writing touching songs but their latest effort takes it to another dimension. All the while taking a more progressive musical approach. Their set, while it did call back to the reasons we fell in love with Yellowcard they did play a lot of tracks from their new album. The crowd did not mind one bit because they sang along to them like the album had been out for a decade. 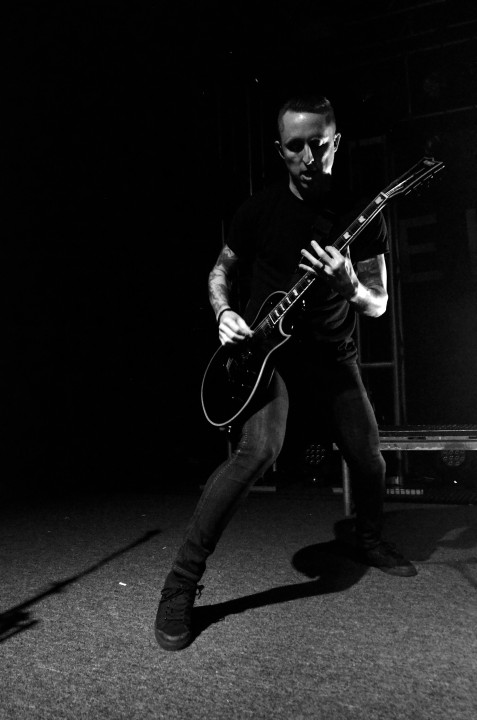 Yellowcard, unlike their openers, did not dress in costume. However, they did put on a fun and emotional performance that may have been hindered if they did play in costume. The mood was set with violin instrumental “Convocation.” Violinist Sean Mackin was on fire all night. High energy, high fiving fans, and did his trademark backflips. Much like their openers Yellowcard has had member changes. Their longtime drummer “LP” had left the band prior to recording Lift A Sail. Filling in him for this tour was Jersey icon Tucker Rule of Thursday. His presence was felt immediately from the driving “Transmission Home.” His hometown crowd gave him a roaring ovation. 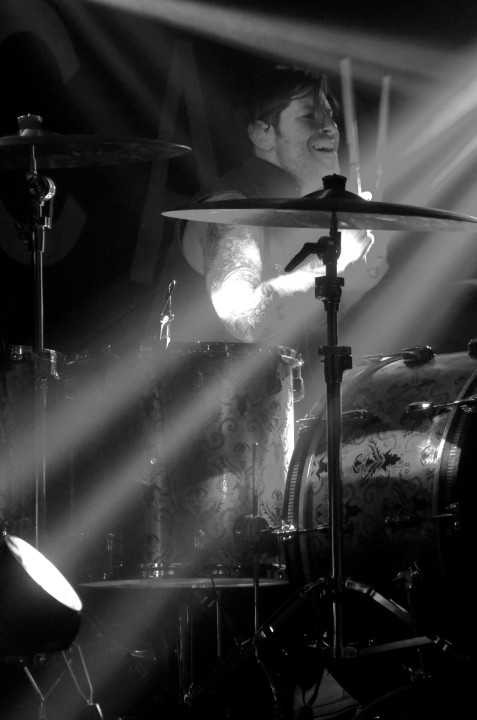 Older fans and the Memphis May Fire fans were unified during Yellowcard’s old faves, “Only One, “Lights And Sounds”, and “Way Away” singing loud and proud. MMF singer Matty Mullins joined them to sing on a track he was featured on, “The Deepest Well.” He was introduced by Key. Key explained that the two bands met while both being on The Warped Tour in 2012. They have been friends ever since. Key also spoke about how great it is that fans of metalcore and Yellowcard can come together and enjoy the same show. He spoke about how he was told, “It wouldn’t work,” if Memphis May Fire and Yellowcard toured together by the suits in the music business. Key drove the point home by saying simply, “FUCK GENRES!” Yellowcard and Mullins put on a memorable performance.

When Yellowcard played the opening riff to “Ocean Avenue,” I thought the building was going to explode. They played the song that made them famous with so much conviction, the crowd loved it. They put so much passion into a song that you know they have played at least a million times. The performance of the night was an intimate one. It was of Lift A Sail’s closer, “California.” A song named after his wife’s favorite state. The song was just Ryan Key and a piano. He poured his heart out to the Jersey crowd and they will be forever grateful. 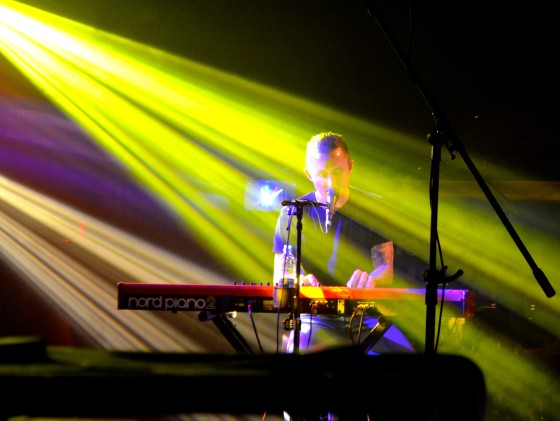