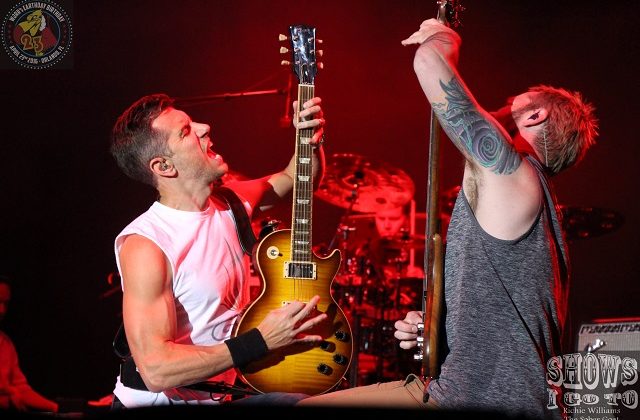 It was just another beautiful, hot Saturday in late April, a perfect day for a rock festival. Earthday Birthday has been an annual event for the last 23 years, thrown by local rock station WJRR and held in honor of our Mother Earth, reminding us that we are all on this planet together as one and should be respectfully mindful of the other animals, plants, and natural resources that are here with us. Oh, and also reminding us that hard rock and metal music are here with us and aren’t going anywhere. Props to the WJRR DJ crew for an efficient production, announcing artists, and entertaining the crowd with interviews and tossing out free shirts and koozies between sets. (Promotion Choice koozies are a great way to promote your business and can be used as giveaways at events like this one.) 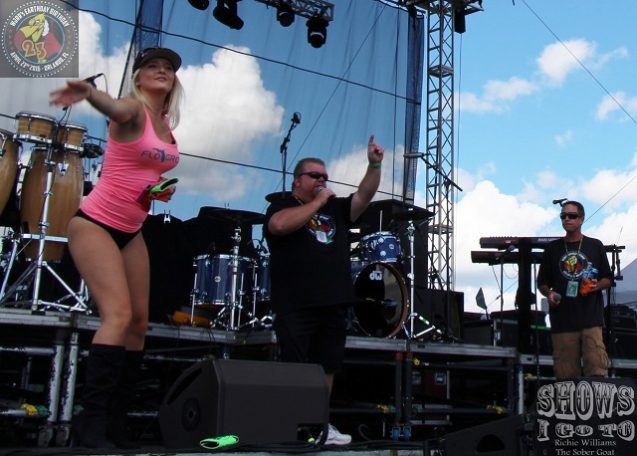 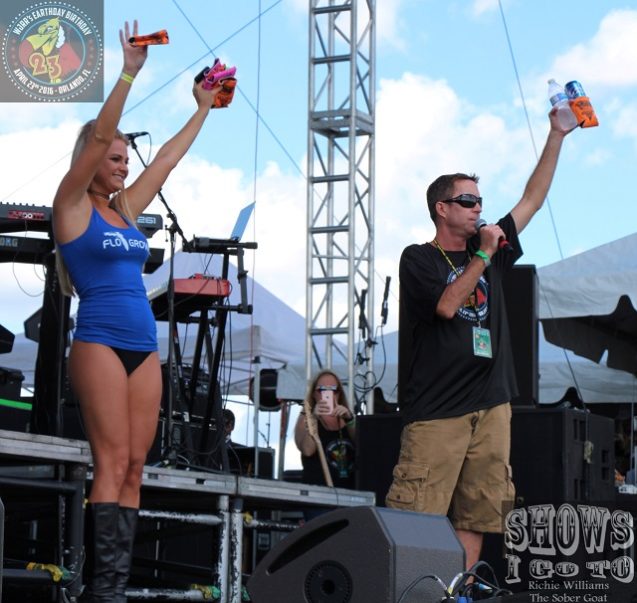 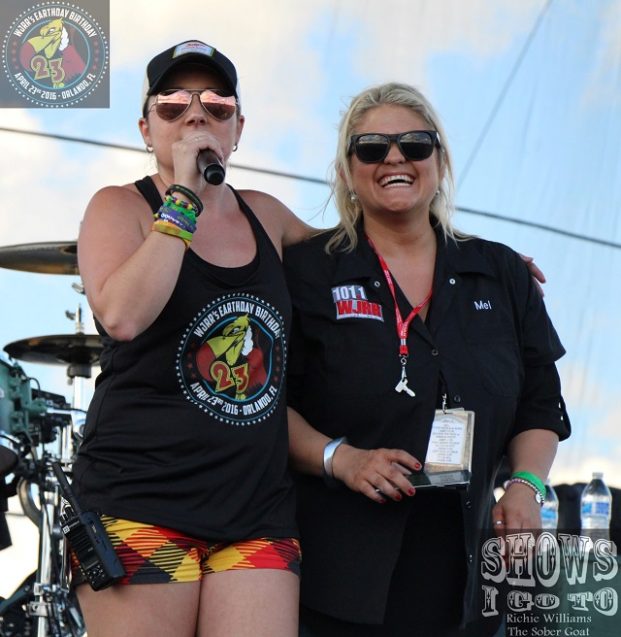 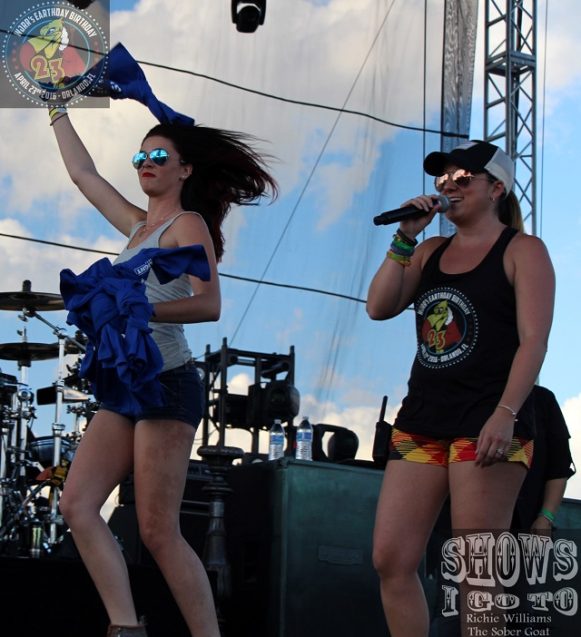 I arrived at the fest mid afternoon. I made my way to the Rock Pink Stage just before Dirty Heads were about to start, and the main stage area is where I would stay for the rest of the day’s festivities. There was another stage hosting music but I was settled in with a crazy group of friends, and the main stage was our home base. This would be my sixth or seventh Dirty Heads show. WJRR’s Pat Lynch and Taco Bob came out to introduce the band, bringing with them two lovely ladies who tossed koozies to the crowd. They played the soundtrack for a sunny Florida afternoon perfectly, and I bet the California group probably felt right at home with the glorious weather. They jammed a 45-minute set and turned the festival crowd into a house party with their melodic hip hop and punk styles. Two of my favorite songs that they played were “Burn Slow” and “Medusa.” 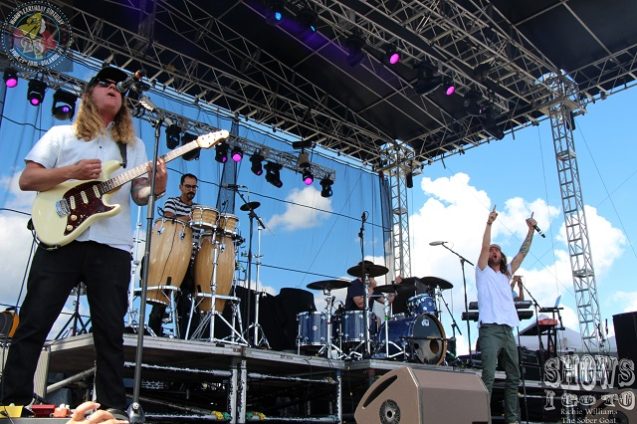 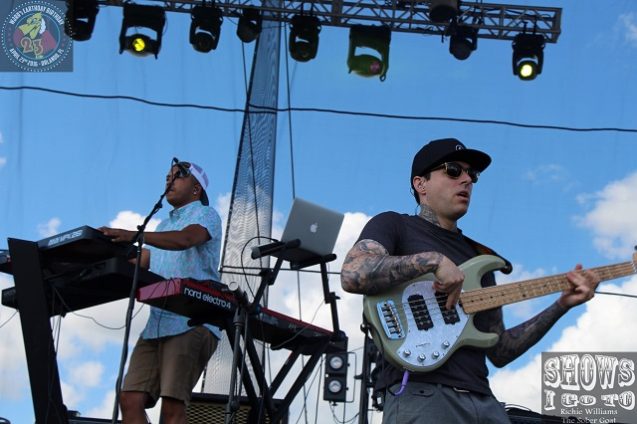 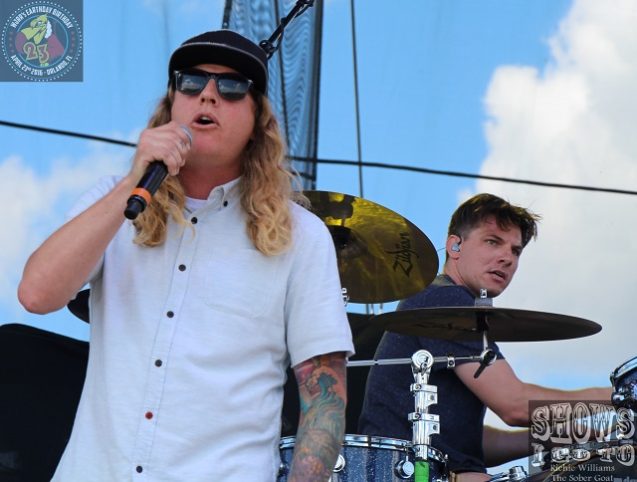 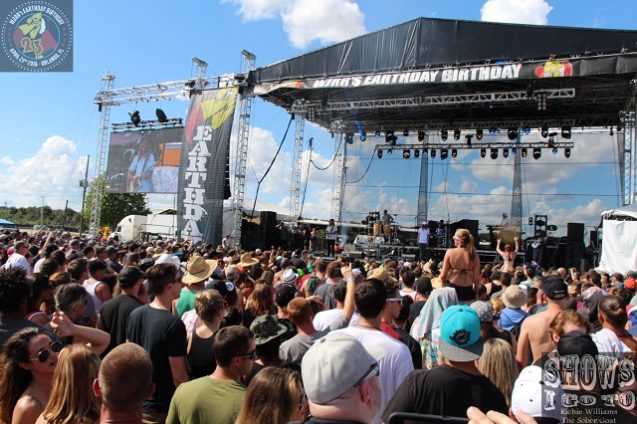 Up next was Bush. I’ve been listening to them for over twenty years–before Razorblade Suitcase was released in 1996. This would be my first time seeing them so I was most definitely excited for their set. They opened with “Machine Head” and “Everything Zen,” both from their first album Sixteen Stone,, with “The Chemicals Between Us” sandwiched between. They then played the two biggest hits from Razorblade Suitcase, “Greedy Fly” and “Swallowed” while playing “The Only Way Out” between those two. After playing “The Sound of Winter,” they went back to Sixteen Stone and played “Little Things” which featured Gavin vennturing into the crowd for the last half of the song before breaking into a nicely done cover of “Once In A Lifetime” by Talking Heads (that was a sweet treat). The last two songs gave me chills and solidified Bush’s set as my favorite of the day, playing more from Sixteen Stone with a Gavin Rossdale solo guitar performance of “Glycerine” into a full band rocking of “Comedown.” All I was thinking while gazing up at the clouds in the blue sky above was, “I don’t want to come back down from this cloud.” 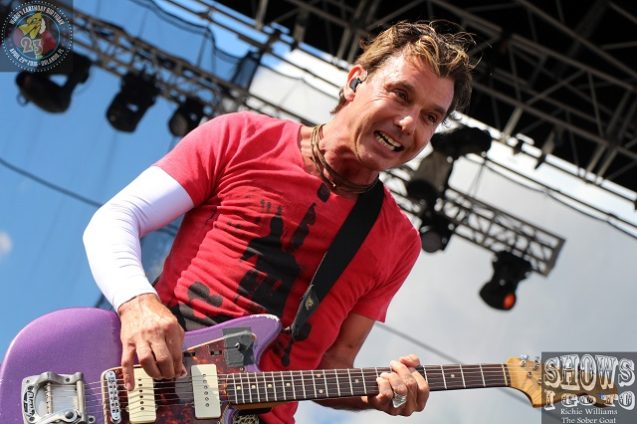 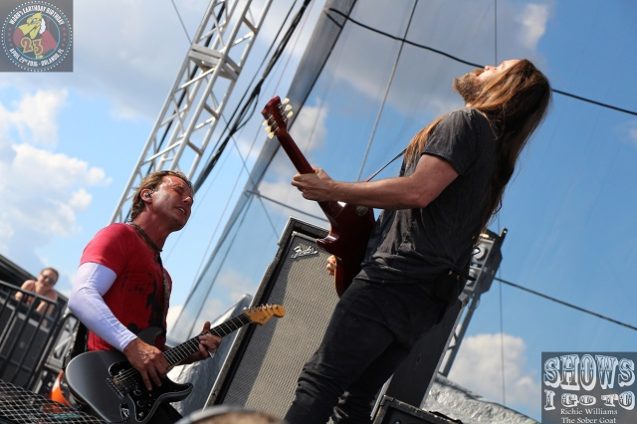 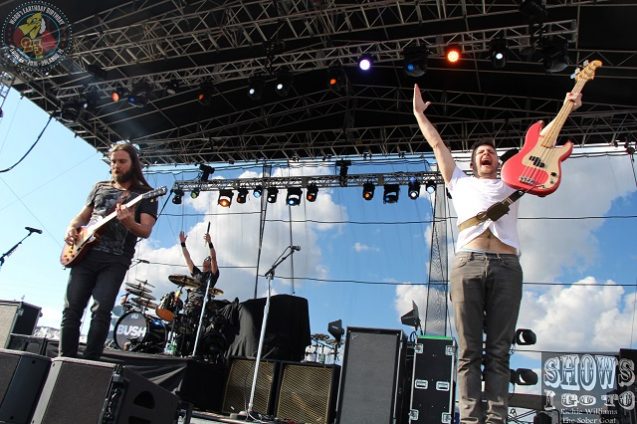 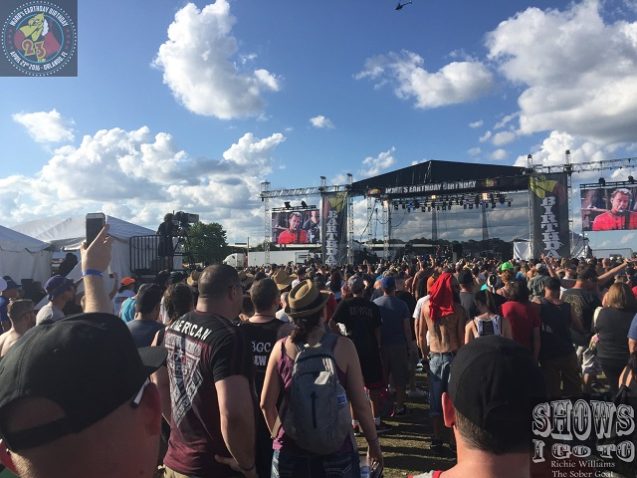 Chevelle would follow next. WJRR’s Mel Taylor and LT came out to introduce the band and toss more schwag to the crowd. The three-piece from Chicago rocked the stage as hard as any three-piece band could. They opened with “Ouija Board” which is the first track of their 2014 album La Gárgola, followed by their 2011 hit “Hats off to the Bull.” The middle of their set featured older hits, including 2007’s more upbeat “I Get It” followed by 2002’s darker sounding “The Red” and “Send the Pain Below,” finishing with “Face to the Floor.” From songs about being hurt by someone to revenge songs, Chevelle’s songs definitely exhibit influences of Tool and Deftones with awesome instrumental and voice performances and amazing lyrics. One thing I love about Chevelle is that their rhythms and beats are simple, yet hard and badass. They have such an amazing tone and purity from just three dudes mixed with a little bit of angry rock and roll. 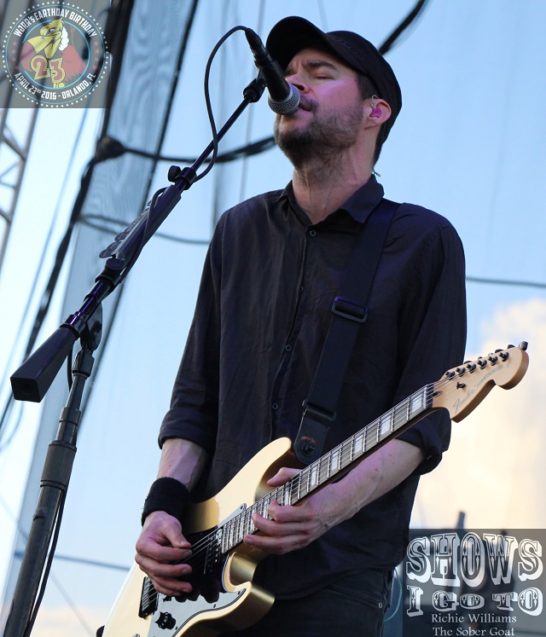 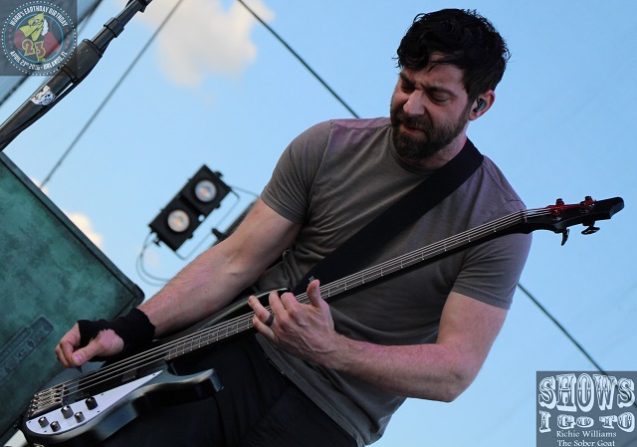 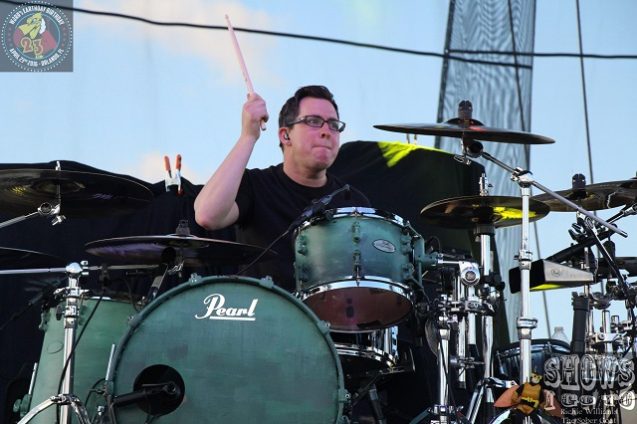 This was also my first time seeing Breaking Benjamin (if I’m not mistaken). I can remember finding out about them in a rock music online chat forum in 2002. The first song I ever head of theirs was “Polyamorous,” a song about the practice of, or desire for, intimate relationships involving more than two people, with the knowledge and consent of everyone involved. The singer’s voice intrigued me the most. It was just different to me at the time, maybe more harmonious, and his voice made the band stand out from many other radio rock bands at the time. I guess that’s why it’s no surprise that in August 2014, the band announced that they had reformed as a quintet with all new members, except for of course singer Ben Burnley, who hand picked each new addition. Nice choices, if I do say so myself! They opened the set with the dark and haunting “So Cold” which really got the crowd moving and singing along. The highlight of the set for me came with the fifth song, a cover medley of “Imperial March” (Star Wars), “Schism” into “Rosetta Stoned” (Tool), “Smells Like Teen Spirit” (Nirvana), and “Walk” (Pantera). And then, the next song was “Polyamorous” which topped it all off for me, and it was only the middle of the set. The last half hour of their set just got better by the minute, and “The Diary of Jane” would close out this electrifying one-hour performance. 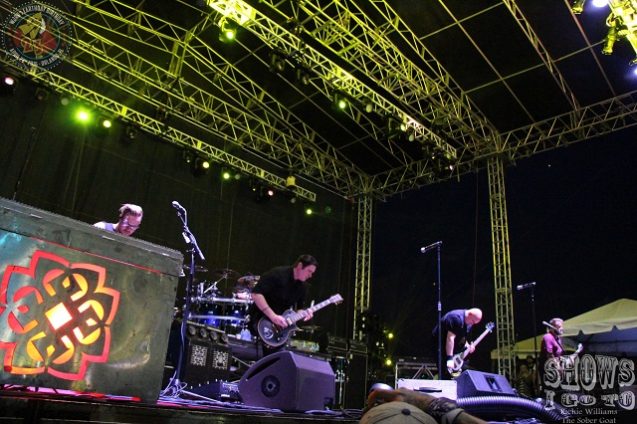 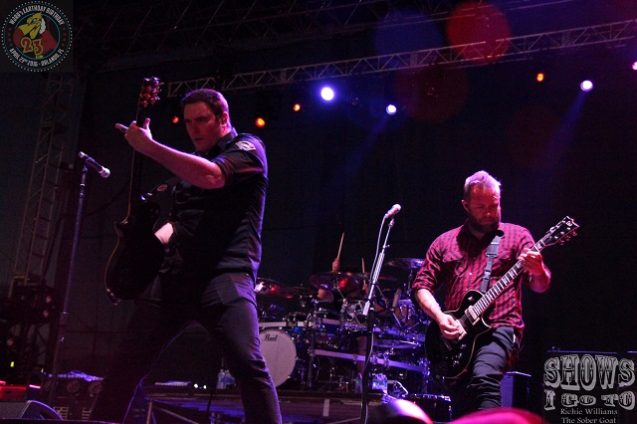 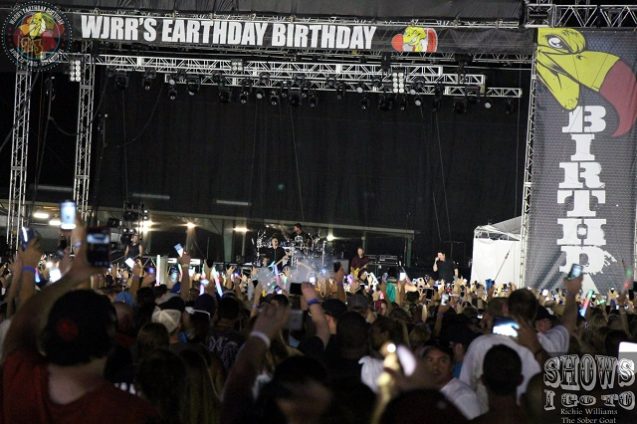 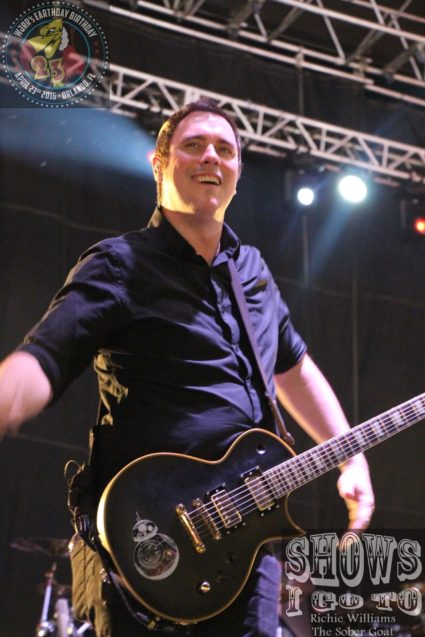 After Breaking Benjamin’s set, I sat down in the back waiting for 311. After about 10 minutes, a massive fireworks display began on the other side of the crowd opposite from where I was sitting. The fireworks blazed up the sky for the nearly the remainder of set break. The crowd thinned out a bit as sunburned tired bodies along with non-311 fans dispersed. 311’s set was delayed a few minutes as the stage crew swept away the firework ashes and debris that floated its way over. 311 finally made their way on stage and opened up with “Beautiful Disaster” to get the crowd energized immediately, followed two songs later by a personal favorite of mine “Freeze Time.” I’ve seen 311 several times (somewhere around 20 shows) and I’m a huge fan (obv). One of the best concerts I ever went to was my first 311 show on the Transistor album tour in Lakeland, Florida, 1997. That show was just as good as this one almost 20 years later. The set included all of the staples, “All Mixed Up,” “Homebrew,” “Random,” “Don’t Stay Home,” “Hydroponic,” “Feel’s So Good,” and “Down,” as well as “Applied Science” and it’s drums sequence. The encore featured “Beyond the Gray Sky” and “Creatures.” Stay positive and love your life! 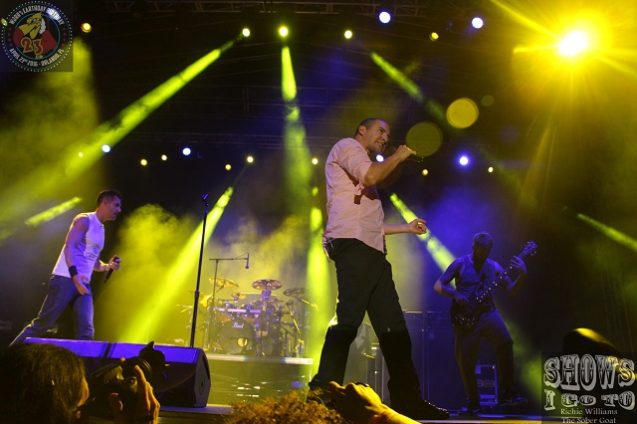 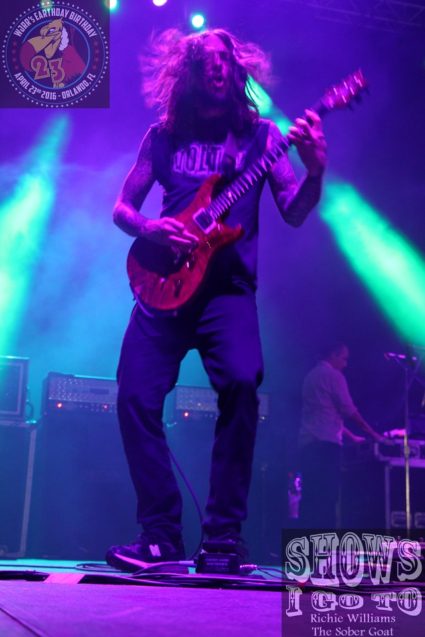 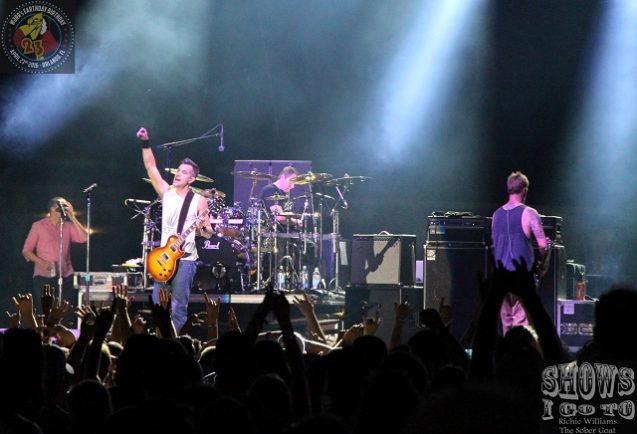 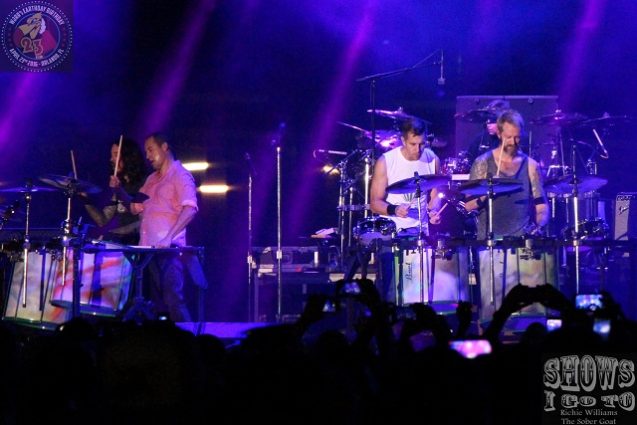 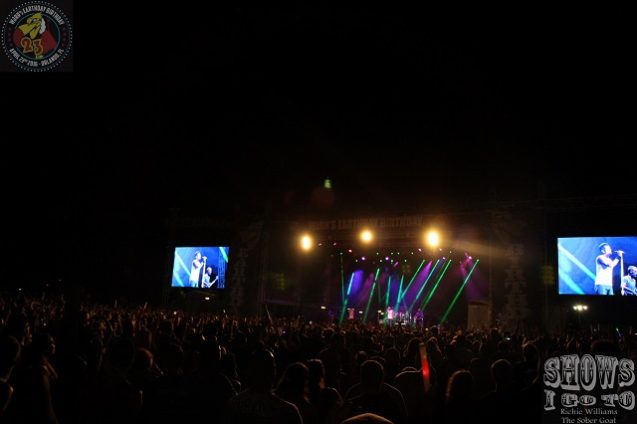 Check out my highlight video below!

And check out the rest of my photos posted below!