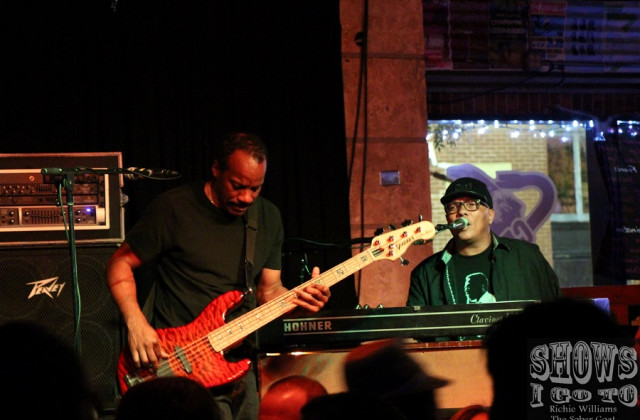 We Are One and We Gon’ Funk As One | DUMPSTAPHUNK Live Review & Concert Photos w/ Kaleigh Baker | Crowbar, Ybor City, FL | November 20, 2015

Living in Orlando, I don’t make it over to shows in Tampa too often. But when I do, it’s gotta be for a particularly sweet show, considering the time, money, and effort that comes with the road trip territory. It also didn’t hurt that this show was on a Friday, relinquishing me from a late night or early morning drive back home — I have some awesome friends residing in the 813. So it was no surprise that I ended up at the intimate Crowbar in the historic Ybor City area of Tampa on the evening November 20. 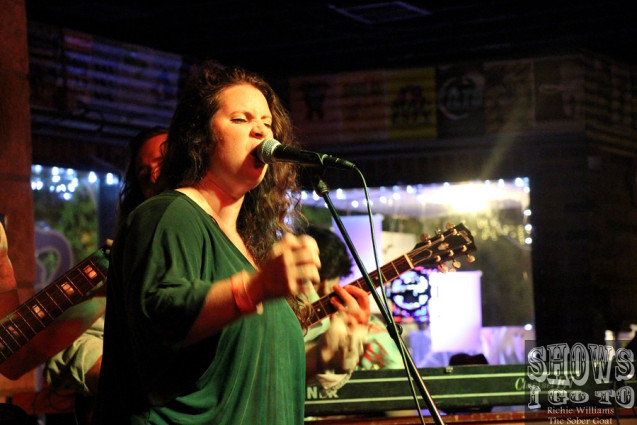 This gal and her dudes rocked the stage for a solid 45 minutes, and unbeknownst to me at the time, the majority of the songs on her setlist were from the Wear Hours. One exception was the last song of the set, a cover of Betty Davis’ 1969 single, “There’s A Break In The Road.” It’s worth noting that halfway through the set, Kaleigh addressed the crowd stating,

Who’s fuckin’ excited about Dumpstaphunk? (crowd cheers) Me too, I’m pretty sure I’m gonna need a cold shower after watching just a couple of their tunes. I’m really looking forward to it!”

My sentiments exactly. It’s always a pleasure to see Kaleigh sing her heart heart out, and this set was just as good as any other of hers I’ve seen. The stage was properly warmed-up and it was time to catch my breath during the set break, because it was almost time to get all nice and dirty from the phunk. Watch Kaleigh Baker’s full set video below, thanks to The Sober Goat.

Formed in 2002-2003 and hailing from the Big Easy, Dumpstaphunk features dueling baselines from Tony Hall and Nick Daniels — one of the dirtiest rhythm sections on the planet — while Ivan Neville lights up his Hammond B3 keys, and cousin Ian Neville’s funky guitar riffs send the grooves into overdrive. The band recently welcomed their newest member, Alvin Ford Jr., a New Orleans born and raised powerhouse drummer.

What’s up Tampa? Alright we gonna do it like this. (holds up one finger) Everybody, one finger. What that represents is we are one, regardless of color, creed, ethnicity… it doesn’t matter, we are one. We need to get the rest of the country on the same wavelength as ya’ll. We’re not gonna go there right now. Right now, we are one, and we gon’ funk as one.” 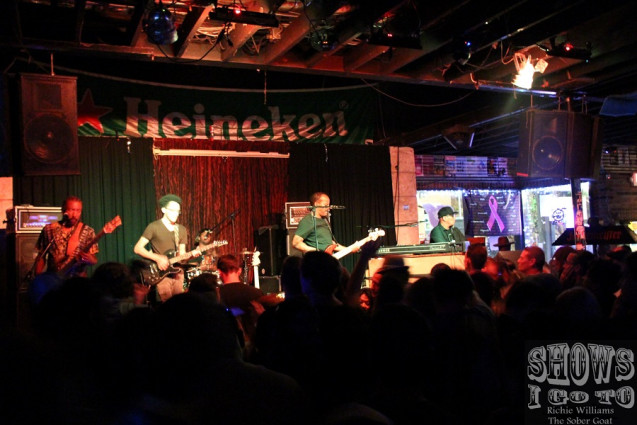 A beautiful introduction to say the least, Daniels’ words were an even more perfect set up for the opening song, a cover of “One Nation Under A Groove” by the one and only George Clinton’s Funkadelic. The song refers to dancing as a path to freedom: the “dancing” can be seen as metaphoric, or in our case, literal. The song’s title of course refers to the Pledge of Allegiance. We were all family in this room tonight, getting down just for the funk of it.

The next song was a 12-minute instrumental jam in which the band had some fun just jamming and getting carried away in the groove. After that, they busted out another cover tune, Sly and the Family Stone’s “You Can Make It If You Try.” Sadly, three days after this show, on Monday, November 23, Cynthia Robinson, Trumpeter and Co- Founder of Sly and The Family Stone, passed away at the age of 71 after battling cancer. Now, I will always remember this show as a preliminary tribute to the funky lady and the timeless music she helped create.

“Everybody Want Sum” was the fourth song of the set and a Dumpstaphunk original from their 2010 album with the same title. Following that was another song from that album “Deeper,” which lovely proclaims the lyrics: “My love grows deeper, Deeper my love grows for you, In this world, I won’t let this world get next to me.” 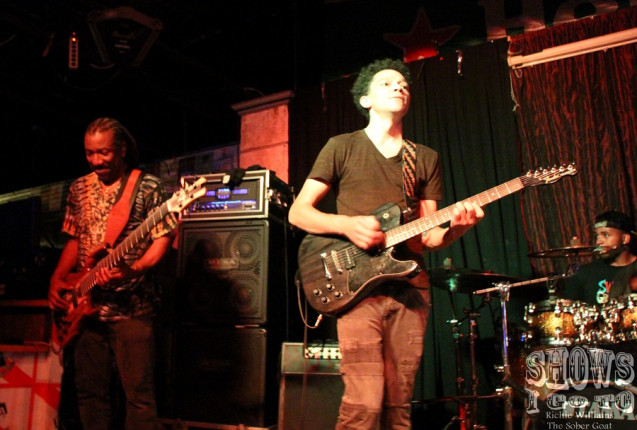 What followed next was my favorite portion of the show and two of my favorite Dumpstaphunk songs back to back. Ivan begins by doing some solo work on the keys, with Nick addressing the crowd “Ya’ll smell that? … Ya’ll smell that?” and then Alvin kicks in on the drums, and the band starts laying down the smelly fast rhythms of their song “Gasman Chronicles,” also from Everybody Want Sum. Then came my personal favorite, “Meanwhile,” which is about not letting life get you down and embrace the good times. “Meanwhile, you might as well have a good time. Meanwhile, go on and shake your pretty booty baby. Meanwhile, you might not get a next time. Meanwhile, go on and shake it, shake it, shake it, shake it!” It’s damn near impossible to not shake it to this song. Go ahead and try it, I dare ya. 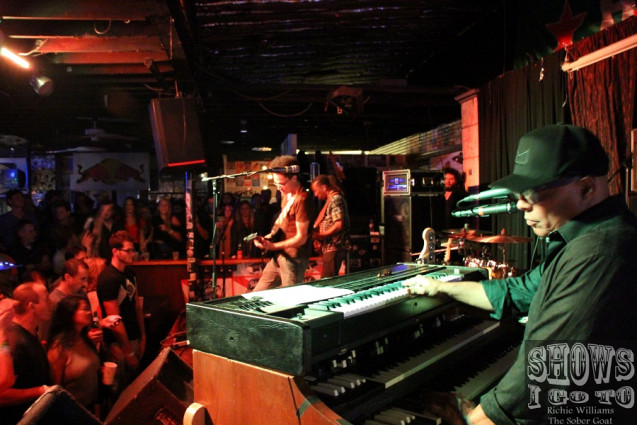 I think I was still shaking my booty when the next song started. We were blessed with another cover, this time it was Led Zeppelin’s “Ramble On,” a special request from a fan in the crowd who knows a thing or two about Dumpstaphunk and their love for the Zep (Dumpstaphunk performed a late night set at the 2014 Wanee Festival with a Led Zeppelin tribute set). 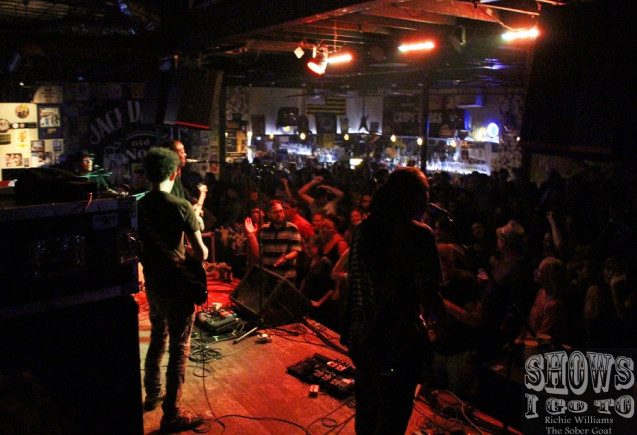 And the ensuing encore featured the first single from that album, “Dancin’ To The Truth,” which commands one to let their body move. I know it seemed my body was moving naturally, but the groove was uncontrollably moving me by this point in the night, or morning, whatever.

Dumpstaphunk turned this venue into a house party that didn’t end until 2 A.M. I have nothing but love for this band. The place was head noddin’, hand wavin’ and booty shakin’ the entire time with a whole lotta love in the air. Watch the full show below, thanks to The Sober Goat.

I’m pretty sure this was my tenth Dumpstaphunk show, but it was the first one not at a music festival. I’ve been to every Bear Creek Music Festival — located at the Spirit of the Suwannee Music Park in Live Oak, Florida — and they have played at all of them. They also recently played there last month for the String Cheese Incident’s legendary Halloween festival, Suwannee Hulaween, bringing in the biggest crowd that park has ever seen with a record breaking 21,000 fans. Watch Dumpstaphunk’s Hulaween set below, thanks again to The Sober Goat.

DUMPSTAPHUNK Live Review/Photos/Video by Richie Williams (aka The Sober Goat).