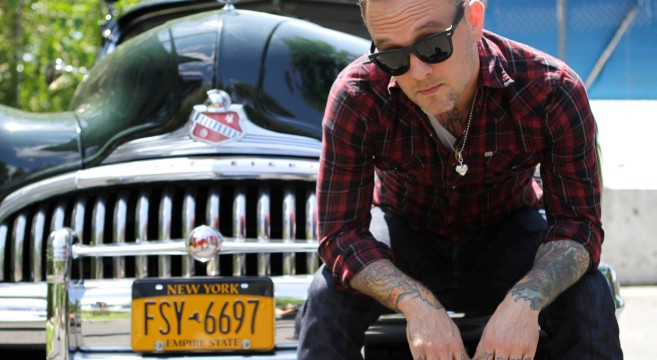 Dave Hause kinda stumbled out of the gate. His set was sandwiched between Chris Farren and the inimitable Rocky Votolato on a Wednesday night at Jacksonville’s venerable, intimate rock club, Jack Rabbits. Before Votolato is a tough place to be juxtaposed. Rocky writes powerful songs that leave fans in various states of introspection with a voice cut from the cloth of honesty and humility. Plus, his solo stuff is all about him, a harmonica and an acoustic guitar. It’s spare in instrumentation, yet full in affectiveness. And Chris Farren had just delivered a solid, funny, crowd-pleasing set.

Hause is a punk musician with singer-songwriter sensibilities. Both Hause and Votolato played in rock bands while coming of age, but Hause has maintained punk musician’s angst, while Votolato’s music sways more to the observationally aware side of things.

Dave Hause felt out the scene until he finally took charge about two songs into a full and satisfying set. He charmed a handful of folks; it later became apparent were clearly there to see him as they made their way to the front of the stage. Then, Hause became aware of two really loud women at the bar, well stage left but well close enough to sonically influence tiny Jack Rabbits. Everyone else was intimately familiar with the pair by that point.

“Were they that loud during Chris’s set?”

The crowd nodded yes as one, and Hause seemed realize he had found solidarity. The rest of the set was an impassioned, sometimes sloppy, somewhat violent dance where Hause led and we followed. His brand of Mature Punk Americana – the type of compositions that one might imagine Brian Fallon touring with post-Gaslight Anthem – crossed demographics. Thirty and forty-somethings pulsed, nodding heads in time with kids in their twenties.

All the while The Loud Girls bleated on. It didn’t ruin the show by any means. They were at the bar, and those who wanted to listen were in front of the stage. Dave Hause and his younger brother were ravaging our soul-buds; the rest of the room wanted them and only them.

Hause knew this, and felt similarly. “It does look a little late in the game for them to be having their first beer,” he said as he drew all of our attention to the bar. His suggestion to combating such a lack of self awareness was that we just rock the fuck out and consider it our little inside joke. Without objection, Dave House turned things up a notch and set the tone for a different kind of set.

After that song ended to great appreciation, Hause paused and half-jokingly hushed us. Crickets. The crowd was surprised, yet a bit on edge. Had they heard us? Were The Loud Girls in on the joke that was their conversation? Several scouts from that end of the bar spoke up in concert. Loud Girl One was in the lavatory, unavailable for disrupting what Hause would go on to describe as something akin to worship.

Candidly, Hause confessed that the last few shows found him in a funk. Such is life. Performing every day is tough business, and few among us has the ability to maintain such focus and intensity every day at work.

His little brother, who did an outstanding job providing background vocals, keys, and rhythm guitar, called him out on those previous lackluster efforts. “For some people, this is like their church,” he chided, “This is what gets them through the week, so you gotta bring it.”

The crowd felt the authenticity of that renewed effort, and Hause unleashed a furious rendition of his tune, “Years from Now.” His eyes closed. The veins in his neck bulging as it swelled with strained passion.

Dave Hause and his brother, Tim, maintained that same intensity and honesty for forty more minutes, pausing only to suck us in a little more with banter that involved the crowd in everything from booking the show to creating the setlist.

Rocky Votolato is a tough act for to open for. But if anyone is well suited, it’s Dave Hause. He channels teenage angst into something mature and meaningful for grown folks. Jack Rabbits is a perfectly gritty space to express Mature Punk Americana; and Dave Hause made for a high octane foil to Rocky Votolato’s gorgeous Wednesday night set.