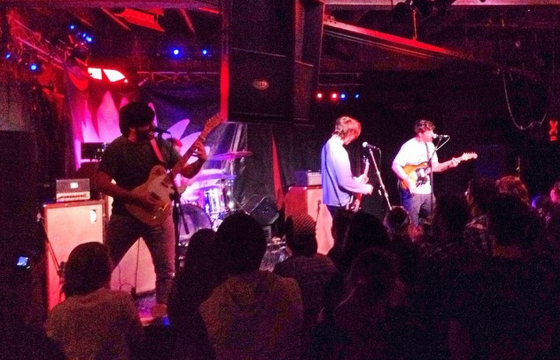 Citizen Live Review + You Blew It! & Slingshot Dakota | Citizen Are An Album Away From Blowing Up | Revolution Music Hall Amityville New York | October 9 2014

This particular gig was a 16 and up show. Look, we all sterotypically dislike teenagers–they’re overly energetic and don’t help bar sales–but, whether these teens realized it or not, they were at a great show of up-and-coming talented bands that are only going to get more and more attention in the coming years, so, kudos to that. However, I will also say: This teen-heavy crowd was one of the lamest I’ve seen in quite awhile. Perhaps it was the fact that the majority of them were unable to purchase alcohol, but, I’ve seen drunken senior citizens at a wedding having a better time. The vibe was as if they were unfamiliar with the artists performing.

I wasn’t able to catch Makeshift’s set due to the show’s early (6:30) start time but what I caught was the hardcore punk of True Love. I do have admiration for the originators of this genre: Black Flag, Minor Threat, and Bad Brains, but this genre as a whole never captivated me. True Love did not reinvent the wheel, but they did manage to make a handful of “hardcore kids” move, which was one of the only times the crowd moved.

I think “hardcore dancing” can not only be dangerous, but it can make one look pretty silly. I am pretty biased though as I’m not much of a mosher. Yes, I’ve sought out being it the pit, but if I’m in it, I can handle myself because I’m not an asshole. I remember going to Evergreen Terrace shows in Ocala, Florida in the early 2000s. Florida had a “hardcore” scene at the time. A scene fully equipped with black hoodies, bandannas, and shitty tattoos (all that remain are the tattoos). Hardcore dancing, for those who don’t know, is chaotic movements by flailing arms and legs in a way that it looks like a martial artist with no form. Another common move is bobbing the head as if to mimic a chicken. A personal favorite of mine, and the move that cracks me up every time, is the “picking up change” maneuver (which is exactly what it sounds like). Although there were no “picking up change” moves during True Love (c’mon Long Island!), the band was very energetic, playing loud and aggressively and featuring multiple heavy breakdowns. It may not have been my cup of tea, but True Love were good at what they did.

After True Love’s cleared the stage, only a drum kit and a Yamaha keyboard remained. Behind the kit was a man equipped with fantastic “Jew Fro,” he was one hell of a drummer, showcasing some of the better drum faces I have ever laid eyes on. Behind the keyboard was the wonderful voice of Carly Commando (who’s name is equally wonderful). This duo is Slingshot Dakota. They sounded fucking great.

I was quite impressed with Slingshot Dakota‘s entire set. From the clinic that the drummer put on, to the Hayley Williams meets Allison Weiss vocals that Carly  Commando delivered. The drummer gave it his all even kissing his cymbals in between songs. Although it was just the two of them, they sounded so full that it was like an entire band on stage. My favorite performance was of their track “Gossip.” I highly recommend seeing this band live.

Unlike most bands, Orlando Florida’s You Blew It! almost sounded slower live. Now, this is not to say that they were not energetic. This was my first time seeing You Blew It! and they were as great as I anticipated them to be, just slower. With their Get Up Kids and Weezer’s Blue Album influenced tunes, they quickly won over the Long Island audience (even after their guitarist called the audience out asking them why they are so sad). “Are the Rangers (Hockey) losing or something?” He said. He even made a Thom Yorke joke directed towards lead singer and guitarist, Tanner Jones. The joke seemed to go way over the young crowd’s head.

You Blew It! released “Keep Doing What You’re Doing” in early January, their sophomore full length. It is one of my favorite albums of 2014. The songs they played from that album were performed masterfully live. “Strong Island” was solid. The lyrics “You’ve Indicated That I’m Nothing But A Friend That You’ve Baited,” were fun to sing along with when they played “Award Of The Year Award.”

My favorite performance was of “Match & Tinder” the opening track off KDWYD. In between songs the applause for them gradually gained more and more. I also saw a lot of people buying their merch after their set. I think it’s safe to expect big things from these dudes in the next few years.

Aside from some hardcore dancing earlier, the crowd actually came to life when Citizen appeared. Which was a great sight to see for me. This was my third time seeing Citizen. The first time I saw them was at last year’s Pre-Fest in Tampa when they had the unfortunate task of opening at The Ritz at 5pm on a Wednesday. Their performance impressed me that night, but I could tell that they were bummed to only be playing in front of 10 people.

What a difference a month makes as I saw them open for Polar Bear Club at Webster Hall in NYC. The crowd was singing along, moshing, and stage diving. Much was the same in Long Island. It was evident that everyone who came to Revolution came to see them. Their latest album, 2013’s Youth, was spectacular. They played almost the entire album. “Roam The Room,” How Does It Feel,” and the new track “Silo,” were standouts.

The best performance was from the fan favorite “The Night I Drove Alone.” The crowd stage dove and yelled along, singing “I SHOULD’VE CRASHED THE CAR!” Citizen is an album away from blowing up and if “Silo” is any indication then it is just a matter of time.