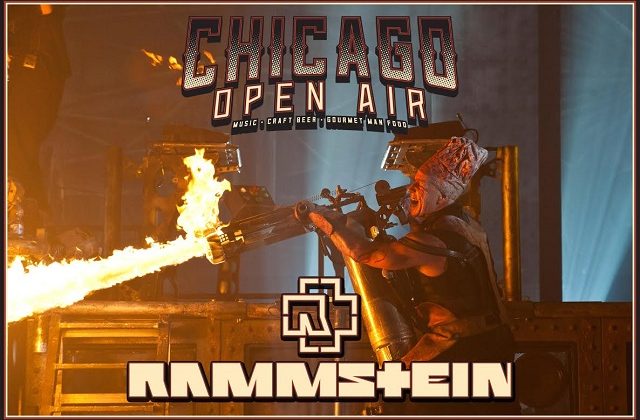 I grew up listening to almost every band playing this awesome festival. I cannot think of a better way to spend a weekend in July!

My eyes grew wide ‘OPEN’ as I gasped for ‘AIR’ when I saw Chicago Open Air 2016 lineup! 😎 Chicago Open Air is going to be the biggest and the best hard rock and heavy metal festival of 2016! This 3-day event is being held on the southwest side of Chicago at Toyota Park in Bridgeview, IL on July 15, 16, and 17, 2016.  It’s a hard rock and metal fan’s wet-dream come true! 😉

Headlining this huge 3 day festival will be Rammstein, Disturbed, and Slipknot. With this being Rammstein’s only show in the States this year, it is bound to bring a massively insane crowd to start the weekend off right. In addition to the headliners, there will be over forty other bands including Korn, Five Finger Death Punch, Marilyn Manson, Chevelle, Gojira, Breaking Benjamin, Bullet for My Valentine and one of the most insanely unique bands I have heard in awhile, BABYMETAL from Japan (See full lineup below). 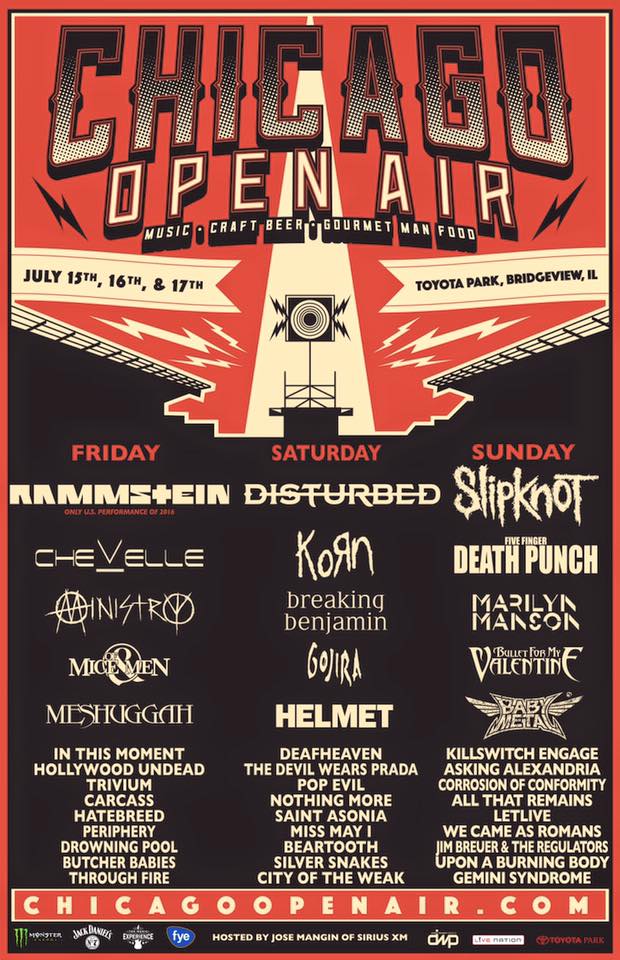 Rammstein, from Germany, will be headlining the first night of this epic festival. I was hooked since my first time hearing this band from their two songs off the Lost Highway soundtrack. The two tracks were “Heirate Mich” and “Rammstein.”  I can’t wait to see the live stage performance this band puts on. It is supposed to be one of the best live acts. This will be their first time touring the US in nearly four years.

Saturday night’s show will be served with a main course of Disturbed with a side of Korn!  Korn is my favorite band of all time. I have seen them over a dozen times. I can’t wait to see them again. There will be no need to super-size Sunday night’s lineup as Slipknot will for sure will be “Picking up the Pace!”

Being held on the Southwest side of Chicago in July should make for beautiful weather to enjoy the weekend’s show.   An average high of 85 degrees sounds amazing to this boy living in the hellish heat of Orlando, Florida. The weather is not the only bonus to be excited about. There will also be amazing “Gourmet Man Food” and delicious craft beer from Chicago locals ,while sponsors  Jack Daniel’s and Monster Energy keep the fans fueled and ready to rock!

Like I mentioned, I grew up listening to almost every band playing this awesome festival so I can’t think of a better way to spend a weekend in July. There is sure to be plenty of pyro and some superb stage shows along with thousands of cheering fans pumping their “Devil Horns” into the “OPEN AIR!”

This is definitely one show not to miss for any hard rock or metal fan.