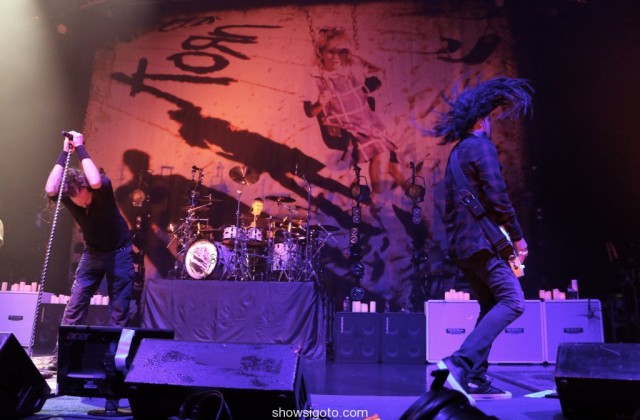 [Editor’s Note: This is another installment of a fun series we call “Two Views,” where we put out two different writers at a show to conduct completely independent live reviews. Then, we edit the two together as a conversational piece about the show. In this installment, Richie and Sarah attend Korn.]

Sarah: Do You Smell A Rat? Here’s a riddle for you: What does a middle aged, shirtless man and a small boy with bright orange earplugs sitting on his dad’s shoulders have in common? Nothing. Welcome to a Korn show!

Richie: It was pure magic Thursday night at Hard Rock Live Orlando. I absolutely love it when bands put on tours commemorating an album. It’s a dream come true in a way. When I first heard that Korn was going to be playing at Hard Rock Live Orlando, I knew it was going to be one hell of a show in that venue, which is relatively small compared to the stadiums and amphitheaters they’re accustomed to. This tour was to celebrate the 20th anniversary of their first album (the almighty self-titled, Korn, released October 1994).

Sarah: My oldest sister dated her fair share of lovable, yet misunderstood, misfits. They were met with plenty of reservations from our conservative parents. It was not their fault by personality, but facial piercings and fast cars didn’t help their case. A certain lovable misfit, and his band t-shirts, stick out in my mind. Jonathan* was already six years my elder, enough to make him intimidating in my middle school eyes. As he peeled into our driveway each evening, music blaring, I was in awe of his rebellious aura.

Richie: I don’t know how many times I’ve imagined the scenario in my head (“Man, it would be awesome to see them play this live in full!”). Now it’s unbelievable how many of those times have turned into reality as it seems more and more album tours are happening, or maybe I’m just getting older to finally have these tours happen more regularly. Whether it’s an anniversary of a breakthrough classic album or the band just decided that they wanted to play a random album at every show on a tour, it’s magic every time.

Sarah: The lyrics were never audible from his car. Upon questioning, I learned they were from a little band named Korn. As if the band t-shirts, that hung too low off his frame, weren’t enough to scare me, my other findings certainly did. I snuck downstairs to the community computer and researched as best as 2003 allowed. What I found were pictures of five dreaded, tattooed men with what appeared to be some pretty anarchic attitudes. I shutdown the computer, crept back into bed, and thought to myself, ‘I’d never listen to this music.’ This was my first experience with Korn. That said, I never turn down a free show.

Richie: I started walking up the steps to the entrance and heard the energy exploding through the doorways, I was instantly paralyzed with all smiles. My head started nodding with the heavy grooves and didn’t stop until the end of the show. Korn was in the middle of track 3, “Need To,” when I walked in, which is a phrase that was currently running through my head … I need to get inside! Unfortunately, I missed the signature symbol-riding intro “Blind.” Unfortunately, I missed the signature symbol-riding intro “Blind.” A cool show note to “Need To” is, for the second chorus Jonathan sang the chorus from a different song of theirs, “Alive” (from the Take A Look In The Mirror album) because it features the same guitar riff and also just because it’s fun to change a subtle little thing like that. 😉

Sarah: Though I was skeptical of the performers and had never been to the venue, new friends reassured me it would be a good night. This brings us to October 15, 2015 at the Hard Rock Live at Universal Studios. A show I thought I’d never go to. A band I thought I’d never see. Here I was, a sore thumb, to be sure. Hipster hat on my head and not nearly enough black, I headed inside oozing of inauthenticity.

Richie: We walked inside and noticeably the place was full of metal and hard rock fans of every variety. I myself was wearing an old, faded black t-shirt I bought at my very first Korn show way back in November 1998 in Lakeland, Florida on the Follow The Leader tour. My shirt has that album cover on the front, and the ‘leader’ in the title, of course, refers to this first self-titled album and starts at track 13 seeing as this first album has 12 tracks. Yes, I was one of “those guys” wearing the shirt of the band I was seeing … yeah, I didn’t care. Tangent: After the show on our walk through the parking garage, I saw a dude wearing what looked like a heavy metal superhero outfit, and upon my inquiring I found out he was a fellow Korn fan (who likes to go by the nickname Mosh Pit Warrior) and his outfit was a padded suit tailored for ultimate comfort in mosh pits, and he was also equipped with stomping boots and a mouthpiece. It wasn’t his first rodeo. 🙂 Sarah: The Hard Rock Live is a gorgeous venue rimmed with signed memorabilia, celebrity photos, and an air of classic rock royalty. After briefly appreciating the architecture, we hurried into the show. The sprawling crowd led us to be pretty far back from the stage (what I consider a safe distance from the vortex of a pit at such a show). The view was still good and there was no question whether the sound was going to reach us. It didn’t take long for it to happen though … My hands punching in the air with the rest of the crowd, dancing to the music. It was a motion I could not stop, nor did I want to. I caught myself however, and took stock of my surroundings. They know I’m an imposter. They could sense I was not a die hard fan. This was The Departed. And I, Leonardo DiCaprio, am an undercover cop hiding in the midst of mobsters, trying to take them down from within. An over exaggeration to say the least, but my head was reeling with thoughts that I’d be sniffed out at any minute.

“She was dragged along by her boyfriend I’m sure …” said no one.

Richie: After a pit stop at the bar for necessary bevvies, we found our spot in the back right of the sold out room. A massive banner of the album cover was decorating the back of the stage. The album cover features shadows of a little girl in a swing and man standing up facing her, and at times during the show the stage lights at the front bottom of the stage would cast eerie shadows of the band right over the album, which was a nice touch.

Sarah: “Does she even like this band?” asked nobody. “SHE DOESN’T EVEN GO HERE!” Sorry. I relaxed more, leant my head to the moment, and ears to the sound. It was then I was able to appreciate the diversity of the people around me. The small boy from my riddle sat atop his father’s shoulders, and I couldn’t help but smile as he peeped above the crowd, a tiny periscope taking it all in.

Richie: Song by song, you could hear fans singing and screaming along, none of which was more prevalent than track 6, “Faget.” The middle breakdown of the song has a quiet, quick rant about being teased in school, and at the last line the music stops just long enough for Jonathan Davis to start saying “You can suck my dick and fucking like it!” However, just like at every one of their shows, he was quickly overpowered by just about every voice in the building before the music kicked back in and the floor became a whirlpool of mosh pits and head bangers.

Sarah: I walked back to the couple and told them I thought it was wonderful they brought their child, and he was enjoying it so much. The mother smiled and said, “Thank you so much. We just want him to know there are other types of music out there other than Justin Bieber … for him to be influenced by our generation’s taste as well.” Unfortunately, I did not get the chance to ask for a comment from middle aged, shirtless guy but I have a feeling we would’ve shared a beer and a laugh.

Richie: One by one, the guys slammed out the remaining songs on the 12-track album, including the fan favorite track 7, “Shoots and Ladders” which is the happy song on the album featuring slowed-down metal with nursery rhyme lyrics, proving that it doesn’t really matter what you’re singing about rather than how you portray it. I managed to snag a few video clips including “Faget” (which starts with the whole crowd yelling “Who am I?!”) as well as my other favorites from the back half of the album, “Predictable,” “Lies,” and “Daddy.” No song is more emotional on the album than the last track, “Daddy.” After twenty years, I can’t imagine that song is any easier for Jonathan Davis to perform than it was when they recorded the album. But he has to know his art has given inspiration to many and that alone should be power enough to perform that song with one hundred percent heart involved. Sarah: I couldn’t tell you what songs they played or compare any previous performances of theirs to the one I saw that night but what I can say is I absolutely enjoyed myself. Korn has a loyal fanbase and packed the room with energy and life, all walks of life. To be in a crowd moved by the people in front of them playing their souls out was an honor.

Richie: Overall, I was thoroughly satisfied and impressed with the album played through. The show could have been over right there, and I would have been happy, but the band came back out for an extended greatest-hits encore which included “Falling Away From Me,” “Here To Stay,” “Spike In My Veins” and “Freak On A Leash.” I’d like to personally thank Korn for creating such a groundbreaking and influential album and for pioneering hard rock metal in so many ways over the past 20 years. They will always and forever one of my longtime favorite bands ever, and I can’t wait for the unavoidable Follow The Leader anniversary tour in 2018 (fingers crossed)!

*Name has not been changed to protect identity as there is no shame in said taste in music or oversized band t-shirts which I hope he still owns. Rock on, “Jonathan”!