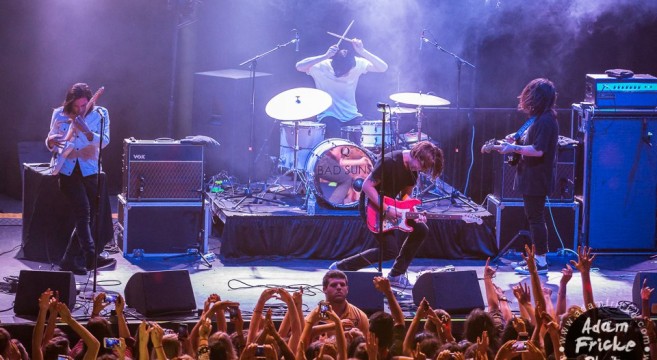 On a sunless, gloomy day, Adam Fricke and I sipped shots of whiskey as we waited for the show. The Beacham was packed with young darlings looking for the addictive choruses of Bad Suns. We found our light.

As all four musicians walked onstage they created a pre-womanhood wail among the star struck girls. They opened with “Transpose” and the musically tight band created an intoxicating interaction with the crowd. The dancing became involuntary as “Dancing on Quicksand” moved quickly into the setlist. Christo Bowman, the lead singer, commented on the crowds’ intensity with, “Man you guys are insane. I love you!”

A barrage of red and blue lights battled against the bass drum head as the blissful blondes and brunettes created a quake in the Beacham. Their uproar caused a competition between which item could create more noise. It was heart and lungs versus bass and electric board. Hands marred with “X’s” mildly obscured my observations.

Bad Suns formed under the Los Angeles skyline around 2012. The band has been garnering massive amounts of attention lately and their tour has been adding mana to this musical powerstorm. With a red guitar coated by the passion of his crowd, Christo nearly sang his voice out.

During “Pretend” Miles Morris was hunched over his drums like a blacksmith creating battle gear for war. He made each movement with precision and prose. It was a poetic jump between bass and snare. He danced with his kit and the instrument itself seemed to become a part of him. Gavin Bennett on bass played perfectly rhythmic lines that added an extra umph! to the larger than life vocals. Every sound in the band was carried further with guitar riffs that bolted across the Beacham by Ray Libby. I am warning you now dear reader, this band will eventually suck you in like a beautiful black hole of irresistible pop and rock. We will all be sucked in. A soon to be star studded example of the perfect blend of experimentation, energy, and emotion.

My mental silence was broken by the screams that ensued with a resounding sense of urgency as Christo began to pull at his shirt collar. He jumped into the crowd and floated on the supportive hands of Bad Suns fans. Christo comments on the reinforcement,

Bad Suns rounded out their setlist with “Cardiac Arrest,” their most recognizable song, before returning for a one song encore and ending with “Salt.” Adam continued to create the beautiful images presented to you here today. I rocked back and forth in a sea of dancing Bad Suns fans and jotted down notes with a lightning quickness.

After the show Adam and I returned to Lizzy McCormacks to sip on whiskey once more as we discussed life and the glorious adventure that is live music. Won’t you join us?