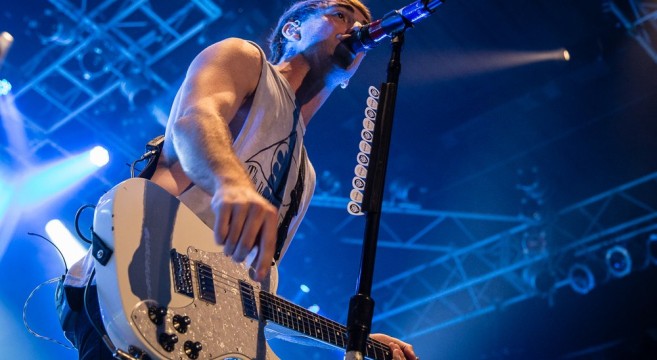 The “Future Hearts Tour” hit the House Of Blues in Orlando hard. Tour lineup included State Champs, (who by far are one of my favorite bands right now) Tonight Alive, and Issues, and of course the heavy-hitting headliners, All Time Low. To me, this was probably the best tour package of the year. I am a fan of all of these bands, and to be truthful, I am a fan-boy for anything All Time Low.

The night was filled with lots of sing-a-longs. It sucks that State Champs played first because I lost my voice almost immediately, singing along to some of the catchiest pop punk songs.

After all the opening bands pretty much had the crowd going insane, All Time Low took to the stage and had one of the BEST lighting setups I had seen in awhile, so it was such a pleasure to shoot them. They went through their entire catalog of songs, playing all their fan favorites mixed with some new material from their newly released album, Future Hearts, (which by the way was the #1 selling album in the world!)

There was two parts of the evening that pretty much summed this show up as one of my favorites of the year so far, first my friend Pauline was pulled on stage to sing one of her favorite tracks “Time Bomb,” and it was even more special because it was her birthday! I will admit she killed it up there and I was glad I could be there to get a picture or two of her! Also, I was a huge fan of the earlier stuff All Time Low released so when they came out to the encore of “Jasey Rae,” I legit almost shit myself because the 17 year old in me was jumping for joy.

Even though it had been a few years since I’ve seen All Time Low play a live show, they reminded me of why they still do it, they are great at creating memorable music they, and the fans, love and sing-a-long too. Thanks for one hell of a night, All Time Low! Oh yeah, and the confetti! Orlando can’t wait to party again!