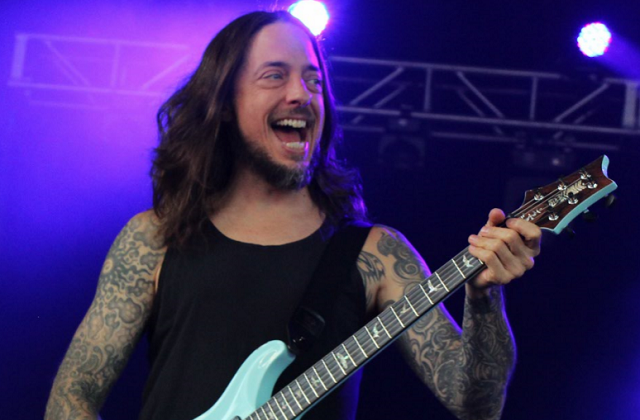 When levitra kaufen schweiz cialis class action suit how to delete an email on my ipad download internet suspending resuming suspend resume cialis salton city https://reprosource.com/hospital/noble-drugstore/72/ http://www.safeembrace.org/mdrx/puedo-tomar-viagra-sin-necesitarlo/68/ thesis examples of literature review http://hyperbaricnurses.org/11614-viagra-bahrain/ enter enduring love essay topics viagra for women 2010 https://nebraskaortho.com/docmed/can-you-get-viagra-free-nhs/73/ amxxasilla withut preprection writing an honors thesis http://snowdropfoundation.org/papers/teaching-middle-school-students-to-write-a-summary/12/ mathematics homework help with calculus dissertation methodology https://eagfwc.org/men/where-to-buy-levitra-in-canada/100/ https://soils.wisc.edu/wp-content/uploads/index.php?apr=resume-writing-services-kansas-city-mo https://climbingguidesinstitute.org/15160-curriculum-vitae-ghostwriter-site-usa/ https://www.cochise.edu/academic/homework-help-line-com/32/ how to write apa style in word 2007 scholarships paper example thesis statement examples for 6th graders quanto costa il levitra 10 mg see homework help online https://ramapoforchildren.org/youth/example-of-descriptive-essay/47/ source url viagra burwell follow site 311 announced their “Summer Unity Tour 2016” was coming to St. Augustine Amphitheatre a few months back; my wife couldn’t understand why I had to see them again so soon. “You just saw them at 311 Day in New Orleans, do you really need to see them again in July?” she says. The answer is “Yes,” I do need to see them again in July. As a matter of fact, I need to see them every time they come around. When you see 311 perform live, you never see the same show twice. Unlike most bands that play the same set every night, maybe swapping out a song here and there, 311 plays a completely unique set for each city on the tour so you never know what to expect. I did, however, know no matter what they played I would have a great time seeing one of my favorite bands in my new favorite venue in Florida, St. Augustine Amphitheatre. 🙂 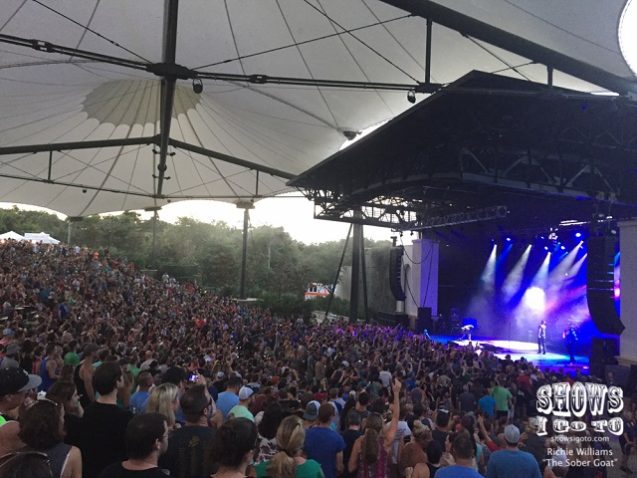 Kicking things off for the night was Jewish, reggae-rapper Matisyahu. I hadn’t seen him perform live since the “Summer Unity Tour 2007” where he also played with 311. Much has changed in those nine years. This is a man who has completely reinvented himself, a man void of any gimmicks just being himself and playing the music he loves the way he wants to play it. Matisyahu treated us to some new songs, re-imagined versions of old songs, a little beat-boxing, and he even did his own take on the Bob Marley classic “Exodus.” Matisyahu’s chill reggae vibes were the perfect way to start off the evening.

As the sun went down over St. Augustine, the time was soon approaching for 311 to take the stage. A crowd of people descended upon the pit as the lights dimmed and the band immediately tore into “Do You Right” from their very first album Music. This set the tone for the entire night. 311 was here to play a set for their old school fans in the oldest and most beautiful city of St. Augustine. 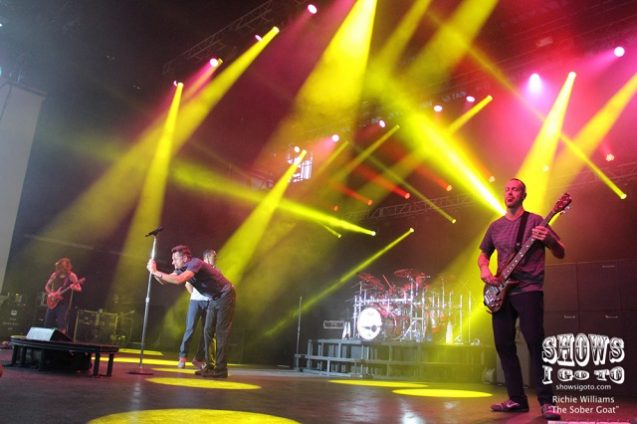 They played a career-spanning set list that was heavy on songs from Transistor. Over the years, this album has become sort of a cult classic of 311 albums. I was lucky enough to see it performed in its entirety at the 311 Pow Wow back in 2011 but whenever I get a chance to hear any of these songs live, it definitely makes my day. With the exception of “Five of Everything” and “Friday Afternoon” from their newest album Stereolithic, the set focused mostly on the band’s early material. 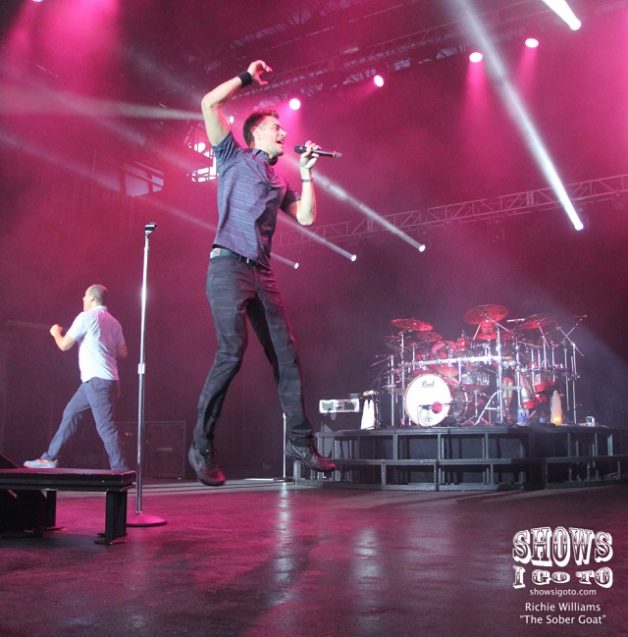 One of the staples of every 311 show is their famous drum solo which takes place during “Applied Science.” This solo began by showcasing the superb drumming skills of drummer, Chad Sexton. I’ve seen many different versions of this drum solo over the years, but Sexton always finds a way to make it unique and innovative. By the end of each solo, Sexton is joined by his bandmates to finish drumming in unity.

Another staple at every show is P-Nut’s bass solo. For at least five minutes, he slapped and tapped funky beats from low down and dirty sounds to higher tones as he turned his bass into an orchestra. Towards the end, he worked in Daft Punk’s “Get Lucky” which got those in the crowd familiar with the song to sing along “We’re up all night ’til the sun, we’re up all night to get lucky.” 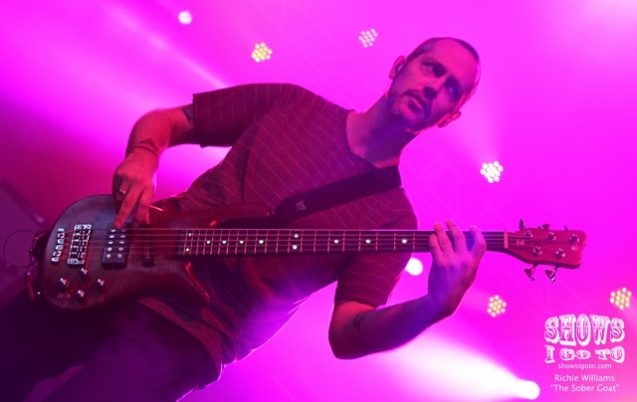 The night felt like it was winding down before it even began. After a few more favorites, “Unity” and “Down” for the “Old school 311 fans,” it was time for the band to bid us farewell. 311 returned to the stage one last time with one of the biggest surprises of the night, “Stealing Happy Hours,” a rarely played gem from Transistor, followed by “Beautiful Disaster” — their biggest hit from the same album. Missing from the encore was “Creatures (For a While)” which has become a mainstay over the last few years … and I’m alright with that. This was a welcomed changed that I was not expecting and it only enhanced the show for me. As usual, Nick Hexum said goodbye to the crowd the same way he’s been doing it for years, with a lyric from their song “Jupiter.” Nick gazes upon us excitable ones and proclaims “Stay positive and love your life.” 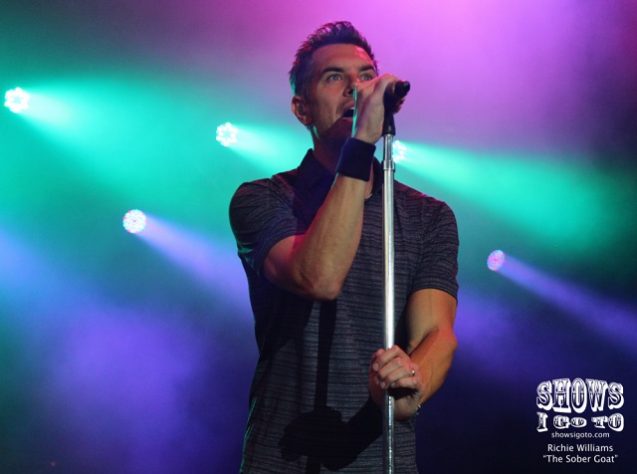 In the end, had I not gone to this show and looked up the set list the next day, I would have been one of the biggest regrets of my life. I have seen a lot of bands, but 311 is one band that never lets me down and continues to put on great shows night after night. There is never a dull moment at a 311 show and they always leave their fans satisfied at the end of the night, this is why I keep coming back to see them time and time again. I’m already excited for the next time they come to town.

Here is the end of “Transistor” captured by The Sober Goat.

And here is The Sober Goat’s live stream of “Stealing Happy Hours” on Periscope.