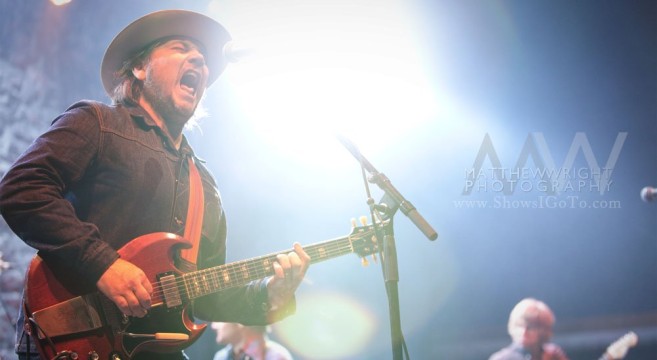 There was a time not so many months ago I peered hard inside my mind’s eye and I saw the future of rock ‘n roll laid out in front of me: that future carried with it a string of at least four Wilco Florida concerts inside a week’s time. Sigh. It could have been really pretty beautiful. Reality managed to elbow its way past starry-eyed speculations, however. It shoved its way past the make believe “shoulda, coulda, woulda” scenarios. When that dust settled, there weren’t four shows to drink in, but a still-solid two.

Seeing Wilco do its thing in a couple of places this past week—Hard Rock Live in Orlando and St. Augustine Amphitheatre, a stone’s throw from sandy shores—they both tend to blend together. One wasn’t necessarily better than the other; they complimented each other. We got a perfectly lovely “At Least That’s What You Said” to lead us into all else that followed in Orlando, but we had the outdoor air above and surrounding us when we all joined into a “California Stars” sing-a-long up north. Mix and match them however you prefer; they both brought brilliance in spades.

I do recall the smilingest version of Jeff Tweedy I have ever laid eyes on last week. For the uninitiated, he can come off as a fairly prickly sort live. His good mood set a tone for both shows. Maybe 20 years of fronting a band and getting better at it as time marches forward, maybe that tends to soften a guy around his harder edges? I don’t ask for the reason or reasons, though: I’m simply pleased with the end results.

I morphed into one of those concertgoers I usually despise and stare pretty menacingly at. I was singing along so loudly to the band’s songs and magnificently vague lyrics that I won some surprised looks before managing to snap right out of it (and not for very long). Tweedy’s great mood begat my great mood begat the collectively great vibe of all who’d gathered together in the name of these Chicago favorites. Just as the song promises that “Wilco will love you, baby,” they made good on those words. They caused us to love on them plenty in return. Just without the embarrassingly long hugs to sift through.

There are reasons this time was better than a lot of times, reasons that can be explored beyond “Singer was happy, crowd got plenty of the happy feelings.” We can go ahead and try and list those out if you’d like. Take, for example, that the room at Hard Rock sounded so damn good, and so much warmer than its usual. Consider that whoever was manning the lights along with who was in charge of that inventive backdrop was (okay, is) some kind of an art-eest, one that helped elevate all that was already happening. Some were even saying they couldn’t manage to stop watching the backdrop instead of the band they’d paid to see. High praise that.

And here’s a highlight I can slap a blue ribbon on and declare a humdinger of a winner: ending both shows as softly and organically and acoustically as they possibly could, throwing Uncle Tupelo tunes at us (“We’ve Been Had”) and taking all the fire and steam out of “Misunderstood,” just because they felt like it. No need to make a big bang of a finale when plenty had come before it, right?

Once upon a time, I had the long chance to helm a little radio show in Salt Lake City. My go-to opener was Wilco’s live take on “Misunderstood” (the Kicking Television version, yes). It was undeniably powerful. It managed to make such a statement, it would do all that was needed when it came to grabbing listeners by their head sides, shaking them violently and demanding their closest attention. To hear them go the exact opposite direction, though? The curious thing was this: it did the same thing. Only this time we had to lean in and hold our breath as they got quieter and quieter, finally fading into their farewells and goodbye waves.

That’s the way you do it. That’s a band for you. Perhaps that’s some of how you keep rock ‘n roll alive. Whatever it is, this is my out loud Wilco plea: keep on doing it. Keep on touring, writing, surprising and whatever else you want to throw into that mix. The newsflash is, yeah, we’re on board, now and always.