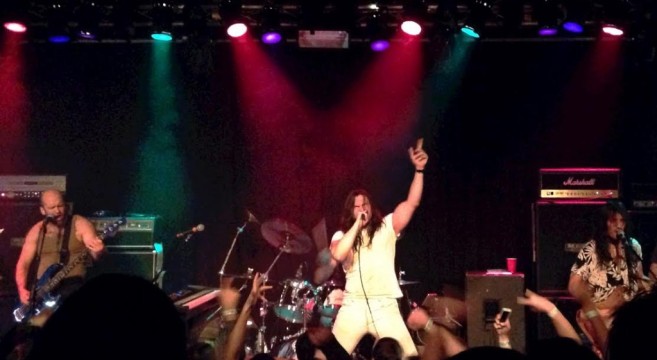 Editors Note: This is our second installment of a fun new series we’re calling “Two Views,” where we put out two different writers at a show to conduct completely independent live reviews. Then, we edit the two together as a conversational piece about the show.

In this installment, Dena and Trevor attend Andrew W.K.’s party of a performance in Orlando, FL. Dena had never witnessed a live Andrew W.K. party before but is a huge fan of the man and what he does for the world. And, she likes to party. Trevor, well, Trevor loves Andrew W.K., has seen him live multiple times, and absolutely loves to party, HARD! – Mitch Foster.

Dena: I suppose it should come as no surprise that the man most recognized for his piano-driven, punk-and-metal-infused rock anthems, would be fantastically fun live. But there’s a heck of a lot more beneath the surface of the self-described “King of Partying” — and you feel it when you’re actually at his party.

Trevor: The party began as Andrew W.K. took the stage grinning from ear to ear and slapping high fives to everyone in sight. He opened with the only fitting song, “It’s Time to Party”, the opening track from his classic debut album I Get Wet. By the time the song was over everyone in the room knew we were in for a something special that night.

T: My night began at the Andrew W.K. Pizza Party at Park Ave CDs, hoping for a chance to meet the “King of Partying” while grabbing a slice of free pizza. At most “Meet & Greets” the artist usually signs your stuff, says a few words, and if you’re lucky, you’ll get a picture. I was amazed at the amount of time he spent with each person. Andrew W.K. actually took the time to have a conversation with every fan which made me respect him even more. I was bummed that I didn’t get to personally meet him but I enjoyed watching him interact with fans.

D: Now, to be fair, I should tell you I had the pleasure of meeting Mr. W.K. earlier that day. He had graciously granted SIGT an on-camera interview after his soundcheck, despite already being over an hour behind schedule. I was familiar with a lot of his music and recently became an avid reader/fan of his superbly-written, poignant and entertaining “Ask Andrew” columns in the Village Voice. Still, I was delighted by his demeanor in person. In my decade of working in the media, encountering numerous celebrities, I don’t recall many as humble and kind as Andrew was to me and my crew that day.

T: Any great night of partying must start with some pre-gaming. So, I headed over to Mitch’s place for some beers before heading towards The Social, making it inside just in time to see the band take the stage.

D: The music had not yet begun when I walked into the sold-out Social that night, yet I was giggling in anticipation. I made my way to a tiny clearing near a few friends, packed in tightly with some of the most polite fans you’d want to meet. A pit of more party-hard patrons separated us from the center of the stage. Over the sea of rocking fingers and hands, I saw Andrew’s posse of four guitar players, a bassist and a drummer take their places.

T: Four guitarists! Once all the band members (again, four guitarists!) were on stage a voice came over the speaker that said “Ladies and Gentlemen, Andrew W.K.” as he walked on stage with his fists in the air. 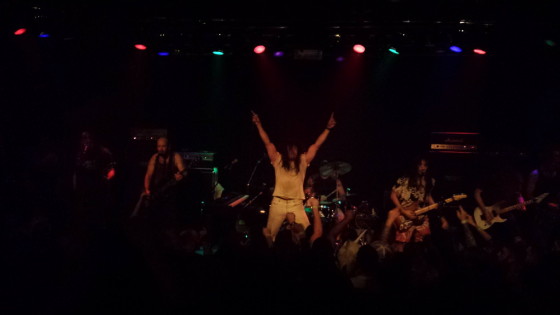 D: As a thundering voice rumbled thru the speakers: “Are you ready to party??!” I jumped and squealed in jubiliation, yes, gosh YES! The guitars started in on the I Get Wet album’s opener “It’s Time To Party” and Andrew bounded onto the platform glowing in his all-alibaster garb and proceeded to sing while head-banging, fist-pumping and flailing about. And, man, did he do those things well.

T: Yes he does, Dena. I had seen Andrew W.K. with his full band several times before but there was something different about the energy in the room that night. I was originally upset that they moved the show from The Beacham to The Social because I wanted more room to dance but it is the intimacy of The Social that made this show absolutely spectacular.

D: Agreed. AWK has what your typical rockstars have: charisma and talent. But it’s his relentless positive energy, authenticity and unbridled joy that translates into a more profound interaction with his fans. Andrew could play a kazoo on stage and I’m certain he would put every dang passionate fiber of his being into it and we’d catch his contagious exuberance and love every sound and second of it.

T: The amount of energy this man possesses is like no other front man I have seen. I could tell too, just by looking at him, that he loves every second of what he does. Who wouldn’t love throwing a party for hundreds or thousands of your closest friends every night in a different city?

D: When you leave a concert with more than what you carried in — without even spending a dime — then, you have won. Last Friday, I was the big winner at the Andrew W.K. show in downtown Orlando. Actually, every single person at the Social must have felt like a champion. I’m not referring to winning material things; merch t-shirts or hats. I’m not even talking about achieving a perfect beer buzz — I was guzzling water that night. I’m speaking about the organic sweet stuff that can’t be bought or easily measured: natural highs, permanent cheek-aching grins, new pals and — yeah, let’s get deep here — expanded consciousness.

I think we always hope for that special zen-like moment at shows. An unmistakable, beautifully ineffable instance when you realize you’re having a truly great live music experience. A deliciously sensory, emotional wave comes over you, something larger than yourself has taken over — music. It rushes to your brain like you’ve just slurped down a handful of Pixie Sticks in seconds.

It spawns excited miniscule mountain ranges of hair follicles on your arms. No matter how loud it gets, everything quiets inside you, your mind opens, you become totally present, losing track of time and space. AWK gave that to me.

T: As the night went on, the crowd continued to get more pumped. (Kudos, to the bouncers for not throwing everyone out because there was more stage-diving than I have seen at The Social in a while.) Some fans even stole a quick hug once they were on stage before jumping back into the pit. Andrew treated us to most of the I Get Wet album including “She is Beautiful,” “Ready to Die,” and, my personal favorite, “Party Till You Puke.” (This video is most awesome cause it’s when he broke his foot and had to perform in a wheelchair.)

D: But back to that talent I mentioned. The guy’s bio reads like a choose-his-own-adventure-book. Whatever life has presented AWK, he’s taken it all head(banging) first and then crushed it, seemingly with ease — and with a fist pump.

At 4 years old, Andrew Wilkes-Krier was learning classical piano at the University of Michigan Music School. And in the years in between, this 35 year-old multi-instrumentalist (see also his drum-a-thon world record) from Ann Arbor who now makes his home in NYC, has built an impressive resume as an artist with his hands in countless creative ventures — from music producing to writing TV jingles/theme songs to hosting kids television shows — to even more cerebral endeavors like penning advice columns to giving keynote speeches to motivational talks… You can actually get winded and dizzy (I did) merely reading his wikipedia page — try it for some extra cardio in your workouts!

However, getting a little winded and dizzy is totally par(ty) for the course when you eat, sleep and breathe his mantra. For Andrew, the term “party” isn’t confined to the conventional definitions. Partying means getting the most out of every single day, challenging yourself, staying positive and being loving, open-minded and considerate to your fellow man. It’s a beautiful message to live out. AWK’s “party,” essentially, is the celebration of being alive. And that can come in infinite shapes and sizes and sounds — music, thankfully, being one of the most magnificent forms.

T: Friday was certainly a party! Let’s talk about how Andrew W.K. played some of the best songs off his second album The Wolf like “Tear it Up” and the keyboard heavy “Long Live the Party.” Andrew showed off some of his classical piano skills with some sweet, party-worthy interludes between songs which is something I have never seen him previously do.

D: He slayed his keyboard with ferocity (check out his 2009 album 55 Cadillic solely of improvisational piano pieces), shredded his electric guitar and gave us words of encouragement between playing all the favorites off the I Get Wet and The Wolf albums. He talked about how Florida had a special place in his heart — many of his band members are from the sunshine state and he’d even lived in Seffner for awhile.

T: Yes! Andrew W.K. mentioned that he even considered this a hometown show and changed the lyrics of “I Love New York City” to “I Love FLO-RI-DA” and encouraging everyone to sing along.

Then, I heard those words that started it all for Andrew W.K. back in 2001, “When it’s time to party, we will party hard.” The place went absolutely insane. For most people “Party Hard” was their introduction to a man who created a totally new genre of music. Every lyric to this song was sung by every person in that room that night.

T: The band came back to play the title track from I Get Wet and finished up with the final track from the album, “Don’t Stop Livin’ in the Red.” Andrew waved his fist in all directions in typical Andrew W.K. fashion as he left the stage, leaving everyone sweaty and satisfied.

D: Twenty-four hours later, I was still riding the happiest wave of AWK momentum, cramming as much fun into my Saturday while singing, “Never Let Down,” when a friend a texted me, inquiring if she should try to get a ticket to see AWK in her town. I replied, “if you love life, you are morally obligated to go. Find a way.”

T: This was by far the greatest Andrew W.K show I have ever seen.

D: He is the real deal, on and off the stage.

T: Andrew W.K. is truly one of the last great rock stars of our time.

T: Agreed. We came for the party but we were given so much more. It was truly an honor to be in his presence. Thanks Andrew W.K..