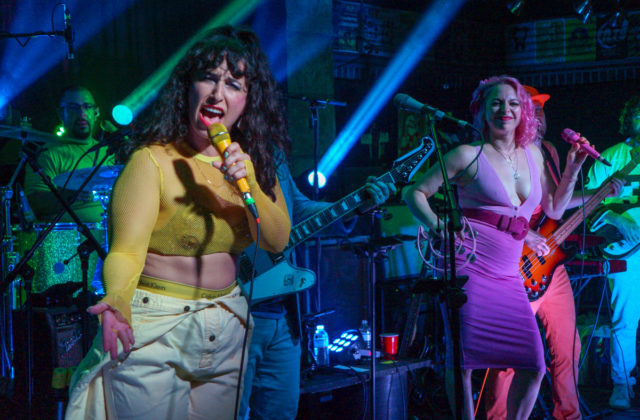 I set sail for Crowbar in Tampa for an evening with Turkuaz, a colorful collections of nine power-funk musicians from Brooklyn, NY.  I’ll be attending this show with my trusty cameraman, Carmelo Conte.  I can’t wait to get funky with my friends on a Friday night!  We arrive to the venue almost an hour before the show and get a great vantage spot from the side of the stage.  Crowbar has plenty of bar space, good sound, and some pretty cool viewing spots.  To the left is an elevated platform with room for 30 people to stand higher than the crowd with a side view of the stage.  Pair this feature with a sizable courtyard and you have yourself a solid venue for music.  This show is sold out, so people jockey for space to see their favorite funk band.  The friends we attend with have never witnessed the glory of Turkuaz and are amazed at how color coordinated they are. 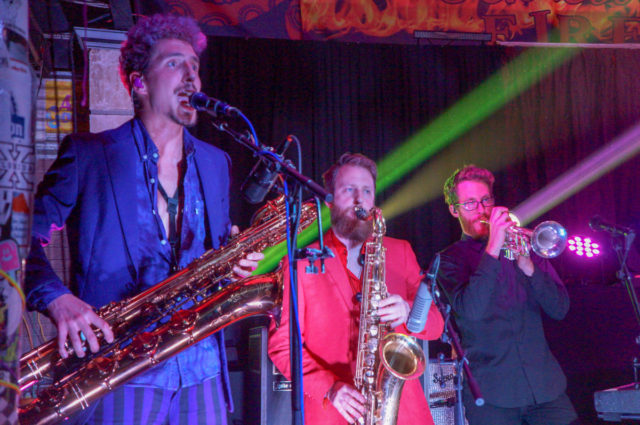 Saxophone player, Joshua Schwartz ♫, is standing right next to us.  His clothes and equipment are all purple; right down to his purple in-ear monitor.  This is the case with every member of this group.  Each is a different hue, dressed with great style and consistent color from their heads down to their toes.  Nine colors coming together to form something bigger than themselves?  Sound familiar? 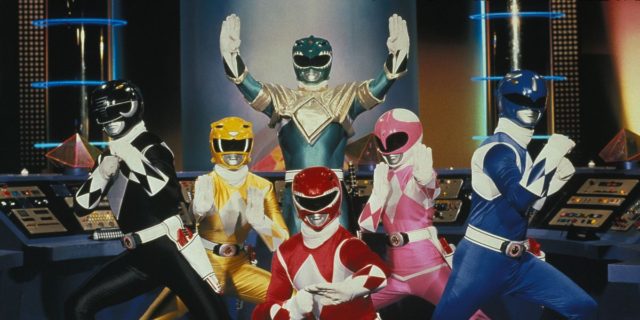 They may not fight crime, but this squad is a force to reckon with.

Greeted by a huge applause when they enter the room, Turkuaz look ready to rumble.  “Percy Thrills, The Moondog” is up first and right away bassist, Taylor Shell ♫, has the floor shaking.  He flexes his fingers during the jam portion of the song supporting rhythm guitarist and lead singer, Dave Brandwein ♫, while he solos on top.  They throw it back with “Gremlins” and Schwartz ♫ sizzles in a solo after singers Shira Elias ♫ and Sammi Garett ♫ lead the way.

“If I Ever Fall Asleep” is arguably their biggest song off of the 2018 album: Life In The City.  Lead guitarist Craig Broadhead ♫ has a huge solo that raises the temperature of the room.  The fans turn up their intensity to match.  I wish I had confetti to throw right now!  Schwarts ♫ shines again, this time singing on the tune “Lady Lovely.”  The bearded one, Greg Sanderson ♫, steps up with a sax solo that could make your toes curl. At this point I’ve broke a sweat and I simply don’t care.  During “Make You Famous,” Sanderson ♫ whips out an electric horn that looks like an Atari had a baby with a power strip.  The power cords are hanging off of this thing while he enters the cheat code to take this party up to the next level.  They finish out the set with covers of Talking Heads’ “Slippery People” and “Don’t Do It,” by The Band as well as fan favorite original: “Nightswimming.” 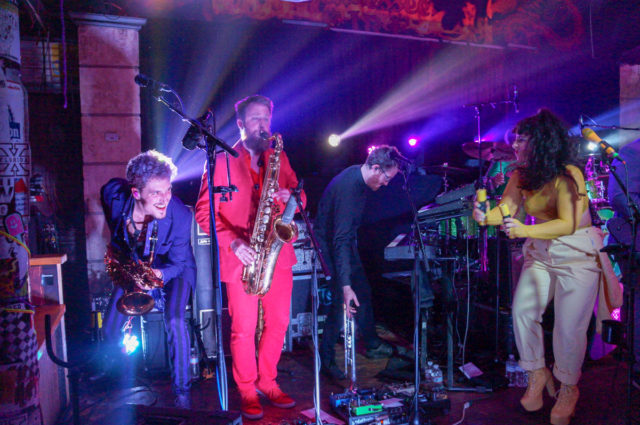 Set two starts off with “The Rules” and moves into a huge “Murderface.”  Broadhead ♫, raises the bar with a huge guitar solo.  In a normal band, the soloist steps into the spotlight and then returns to the group.  But in Turkuaz, the soloist steps into the spotlight and when they near the end of their solo, the rest of the band joins them raising their intensity to match the peak of the solo.  This sends the crowd into a frenzy!

Schwartz ♫ is back at it again, this time beat boxing on “Holy Ghost.”  He sings and is backed by laser sounds provided by Chris Brouwers ♫ during his extended mouth solo.  They follow up with more tracks from their newest album, “On The Run,” and “Rule The World.”  Drummer Michelangelo Carubba ♫ has been doing so much heavy lifting this show, it’s easy to see why he mouths “my back” while grimacing near the end of the show.  Someone buy these people some pizza and beer, they have moved this whole crowd for the last few hours.  Despite the pain, Carubba ♫ still lets loose a thunderous drum solo that shakes the ground.  An incredible set comes to close when they play funkiest “20 Dollar Bill.”  The crowd lets them have it!  Whistles and cheers rain down on that stage begging for this top-notch band to come back out for one more song. 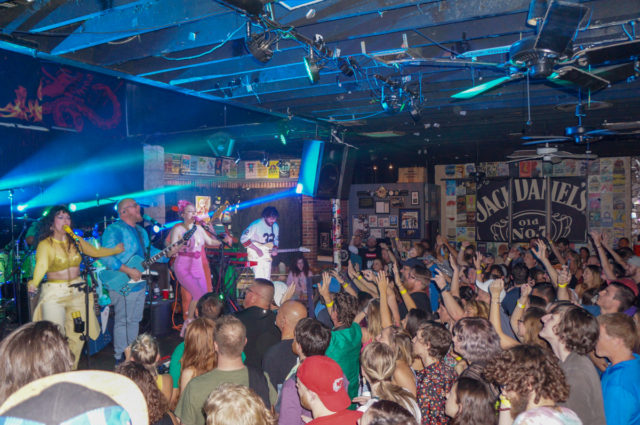 “Bubba Slide” is the pot of gold at the end of the show.  This big time song is always money!  What a show!  I can’t say enough about these guys and gals.  This is what a professional band looks and sounds like!