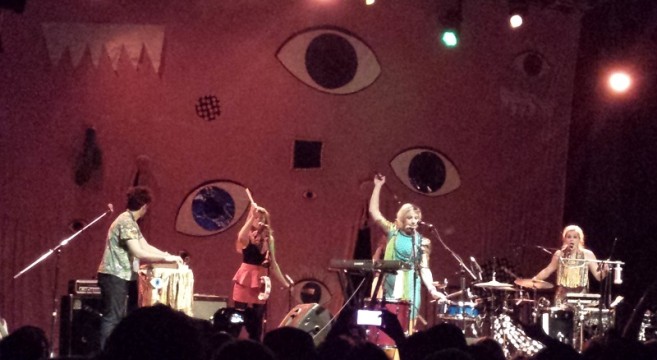 Hey! Where were you the night of Friday, April 3rd? I hope you went to see tUnE-yArDs at the Beacham because it was their first official show in Florida (ever!) and they put on an absolutely phenomenal performance!

The night kicked off early with a thunderously booming, symphonically soothing set by Son Lux (aka Ryan Lott) and his epic (surprisingly minimalist) backing band. I had never heard of this artist before, so it was a refreshing discovery for me. It sounded kind of like a dreamy, grungy, operatic, stomping elephant parade through the heavens if you can imagine something like that. There were some moments that made me think of Sigur Ros, and maybe even Animal Collective with their intriguing variety of creative soundscapes, euphoric (sometimes haunting) vocals, and dynamic rhythms layered throughout.

Remarkably, the rhythm had a feel I could correlate with the African inspired rhythms of tUnE-yArDs, which is not too common of a quality in American music. This was the perfect exclamatory segway into the main event; the energy of the night was heavily boosted by Son Lux. That bass kick of theirs was HUGE too! Mitch commented that it sounded “like a mortar firework” and I would have to agree. The raw energy coursing through this powerful performance as a whole was quite palpable, especially with the thick vibrations rumbling through the floor. Mmmm bass.

With that, the grand finale of the evening was introduced well. When tUnE-yArDs took stage they launched straight into “Sink-O,” one of my favorite songs from their newest album, Nikki Nack. Here’s a good quality video of them performing the song live at a radio station (KEXP Seattle).

What was really fascinating about their performance was that there was an aspect of African dancing on display at front stage a few times throughout the set. Some of the members even switched out. This, along with the chanting quality of the music, gave the show a primitive tribal feel that I personally loved.

There is something about the lyrics of Merrill Garbus too, that often conjures wild, fragmented, dream-like images to my mind. One of their newer songs, “Water Fountain,” should give you an idea of what I mean.

That was definitely my favorite song of the night if I had to pick one. There’s actually a video on YouTube of them playing it at the Beacham too, which offers a better glimpse into the moment if you don’t mind some shakiness. You might get an idea of how awesome their stage backdrop looked as well. It kind of looked like a giant, mutant bubblegum monster, which seems very appropriate for this group’s eccentric style and Merrill Garbus’s history as a puppeteer.

What really sets tUnE-yArDs apart from all the other wild indie projects out there is that they draw musical influence from various ethnic cultures and offer a playful call-and-response style to their lyrics and rhythms. I found myself moving to the music most of the time along with the rest of the lively Beacham crowd. This place was packed full with smiling faces!

The cherry on top for this whole performance was getting an encore with Merrill Garbus on ukelele. Most often she drums and sings, but this last song sounded so sweet and sentimental with the added strings. I was quite awestruck by the sights and sounds of her beautiful soul spilling forth before my eyes and ears. I am hoping we will be seeing Merrill Garbus and Co. come around again in the near future! If you missed out this time, please be sure to check them out next time around. You will be glad you did!