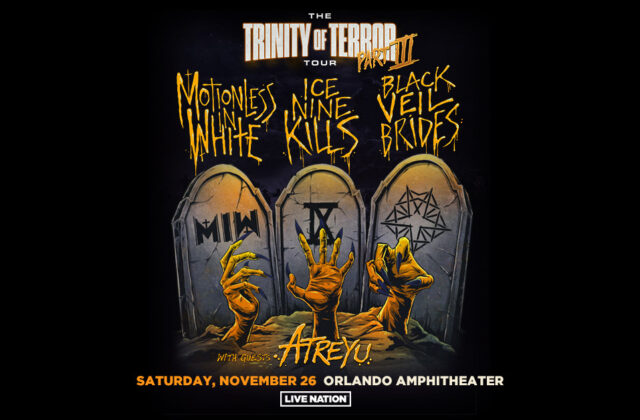 “The Trinity Of Terror Tour” features the unholy triumvirate of Ice Nine Kills, Motionless In White, and Black Veil Brides and will be the first time ever that fans get to see all three bands on the same stage each night! The Orlando, FL date at the Orlando Amphitheater on Saturday, November 26th features special guest Atreyu! GET TICKETS HERE! Scroll down & find the entry form to enter for a chance to win a pair of tickets! In 2006, Motionless In White materialized out of Scranton, PA with an inimitable conjuration of sharp metallic rock, nocturnal industrial, magnetic melodies, and larger-than-life visual imagery. The quintet—Chris Motionless [Vocals], Ricky Olson [Guitar], Ryan Sitkowski [guitar], Vinny Mauro [drums], and Justin Morrow [bass]—quietly clawed their way to the forefront of hard rock, gathering nearly half-a-billion cumulative streams and views to date. Following the success of Creatures [2010] and Infamous [2012], Reincarnate [2014] sunk its teeth into the Top 10 of the Billboard Top 200, bowing at #9 and capturing #1 on the Top Rock Albums Chart. Both Graveyard Shift [2017] and Disguise [2019] cracked the Top 5 of the Top Hard Rock Albums Chart and Top Rock Albums Chart. The latter yielded the band’s biggest hit to date, “Another Life,” which gathered 48 million Spotify streams followed by “Brand New Numb” at 27 million and “Disguise” at 20 million. Along the way, they sold out headline tours and supported everyone from Slipknot and Korn to Breaking Benjamin. The five-piece kept busy throughout 2020, releasing the Another Life / Eternally Yours: Motion Picture Collection EP and Deadstreaming a performance of Creatures for its decade-anniversary.

In a landscape littered with celebrity fakes and would-be influencers, ICE NINE KILLS stand apart. Visionary trailblazers and multimedia raconteurs, INK has steadily built a thrilling new underworld for a growing legion of devoted true believers, with theatrical shows, high-concept videos, and inventive band-to-fan communion. Ice Nine Kills summon the most captivating elements of metal, punk and hard rock and combine it with melody, cinematic obsession, and a literary fascination. Loudwire hails them as “one of the most unique acts in metal right now,” a declaration supported by the band’s Billboard Hard Rock Albums chart topping slab, The Silver Scream. 13 songs of devilishly devious odes to classic horror, The Silver Scream generated anthems for the disenfranchised and subculture obsessives, like “The American Nightmare,” and broke them into Active Rock radio. After a decade of studio wizardry and live theatricality, ICE NINE KILLS draws favorable comparisons to rock icons like Slipknot, Rob Zombie, and Marilyn Manson, via a likeminded synergy of music, lifestyle, and cult following reverence. ICE NINE KILLS is at the forefront of the natural crosspollination of subcultures. “Heavy music and horror are both escapes from our mundane struggles,” singer Spencer Charnas points out. “You could be having the worst day, then you put on a great metal record or horror movie and forget about all of your problems.”

Committed to uncompromising expression, with a foundation in hard rock tradition and rule-breaking iconoclasm, Black Veil Brides is a transcendent celebration of life-affirming power and anthemic catharsis. A gothic vision first summoned in a small town by an isolated kid fascinated with death, rock, theatricality, and monsters (both real and imagined), Black Veil Brides is now a postmodern heavy metal institution with a legion of like-minded fans and supporters worldwide. The band’s strident opposition to conformity and obstacles (from both within and without) strikes a chord with every outcast who felt drawn to the allure of the dark. It’s evident in the 160 million-plus views of “Knives and Pens,” an early demo committed to video before singer Andy Biersack had found his band of brothers. The RIAA-certified gold single “In the End,” which itself boasts over 150 million views, is proof that the group whose merchandise dominated Hot Topic stores before they’d even dropped their debut album was no mere passing fad or ill-fated “scene.” This was built to last.

We’ve teamed up with Live Nation FL to give you a chance to WIN (2) TICKETS to see the TRINITY OF TERROR TOUR at Orlando Amphitheater on Nov 26, 2022!