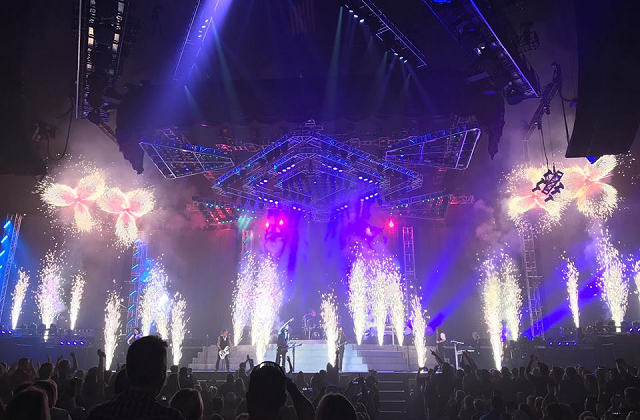 Have you ever wanted to stand up and cheer at a show? I mean really stand up and shout. Like you were at a football game and your favorite team just scored a touchdown? That’s what was happening at the Amway Center in Orlando, FL back on Saturday, December 17. Only, this crowd was standing and cheering with Christmas fervor! The progressive and eclectic music of Trans-Siberian Orchestra had thousands of people jumping up and down, pumping their firsts in the air for perfectly orchestrated Christmas rock music; a show that has lights which rivals any that this music reviewer has seen! The production quality was unmatched: lighting structures raised and lowered, catwalks lowered down for performers to walk across, and a huge fire ball was released from just behind the sound booth in the middle of the giant arena. The visuals, although amazing, still had a tough time to surpass the show that the the band and vocalists were putting on. Gabriela Guncikova, the lead vocalist of the evening, was simply amazing. Not only did she sing beautifully, she also sustained long, gorgeous notes that had people on their feet before she finished dazzling them with her talent. A plot had been woven through the night by the storyteller who’s narration led us from song to song. A Christmas story that may as well have been written by Eddie Van Halen. As the show progressed, the crowd was excited time after time when fire and snow were both introduced, as well as lasers. It was really noticeable that everyone on stage loves their job as they showered the crowd with smiles and rock-powerstances. The show finished with a 25 minute version of The Mountain off of their 2005 album “Night Castle” which featured lead guitarist Angus Clark on a 20-foot tall raised platform with all lights on him as fire bursts flowed from left to right and back again behind him. Needless to say this show was amazing and I personally would recommend it if you like Christmas and rock music. You should definitely go and see Trans-Siberian Orchestra whenever they come to a city near you!