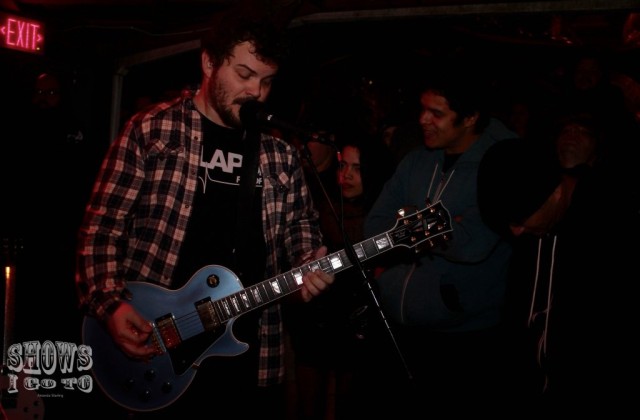 The chill in Ybor City didn’t hold a candle to the biting performance that was Torche. Over a hundred patrons packed in under the patio stage lights and relied on cigarettes and head-banging body heat to keep warm at New World Brewery.

It didn’t matter that it was 39 degrees, or that the clock was inching closer to midnight. All that mattered were the rolling doom-y riffs that shifted the patio into rows of metalheads.

Torche is one of those bands that doesn’t just play to you — it’s as if they’re playing WITH you. Maybe it’s because they call Florida home, but the set at New World felt personal. And with the begging of an encore, we got a solid half hour extra of all of the gorgeous stoner metal that our hearts were craving. It’s harmonic, it’s captivating, it’s the best performance I’ve experienced in a long time.

They played a slew of new tracks off their latest release, Restarter, but (of course) with a blend of favorites. Drawing from their self-titled to their latest, I couldn’t distinguish which tracks from which albums the crowd loved more — I guess we all really love us some Torche.

Back in October, staff writer Josh Jauz put it best — Torche is “deceptively clever” and without a doubt the sort of incredible act that could be placed alongside metal juggernauts like Mastodon or Black Sabbath. It’s tracks like “Loose Men” that send waves through a space, building a sort of confidence and resiliency into each person standing in the wake.

Along for the tour were more eclectic openers. The most physically challenging being Jeff Carey — his light show/industrial spaceship performance was one of the more intense I’ve ever experienced, aside from that of Swans. It was loud, powerful, and blinding — so much so that my weak ass couldn’t stand in front for more than five minutes. Carey gyrated on a console that resembled the operating deck of the Millennium Falcon … if The Falcon had a doom-y hyperdrive malfunction.

Day Old Man appeared on stage like a 70s hair band, but they sure fooled me — it was long, droning, enrapturing as the duo blasted bass and drums with effortless energy. The sludge metal pair produces tracks that average about 15 minutes — so we were treated to three of their six songs. The ambient energy in performers like Day Old Man is unforgettable.

Local opener Meatwound took a heavier approach, a more traditionally robust metal. But their presence was compelling. I was greeted by a slew incredible, powerful tracks off their full-length, Addio. They’re a product of a thriving metal scene in Tampa, and among the finest.

I always considered myself an emo indie punk. But the fires lit in my heart now hold a Torche, so I may be an infant metalhead after all.