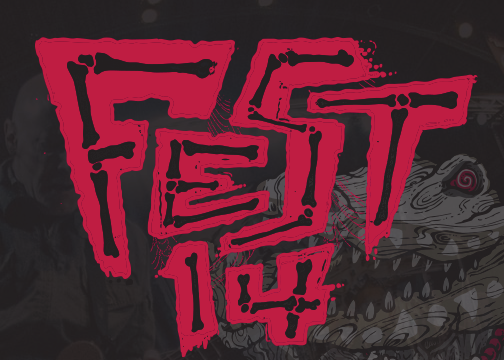 There’s a moment in every band’s set where your heart is lifted, your cheesy dance moves no longer matter, and when the lead singer of your favorite band embraces you midway through their performance. All you want to do is scream your heart out to every song for the next hour with the people who connect with you and shape your life in ways unimaginable.

Those are the kind of performances we see at the Fest in Gainesville, and we’d expect nothing less from our favorite acts. The Shows I Go To troupe is banding together throughout the three-day festival, and we couldn’t be more pumped if we tried. In our excited email chain, we shared the thought- what are our top five songs we can’t wait to scream our hearts out to? Here are the responses from our staff.

All by Andrew W.K.

After going to The Fest 6 all by my lonesome, I had a grande ol’ time! Although I have gone to a few ‘Pre-Fests’ I’m looking forward to making my return and this time I’ll be with some awesome brethren in the Shows I Go To staff! Here are my 5 songs I’m looking forward to raising my fist and vocals to (in no particular order) :

“Repine” by Pianos Become The Teeth

This post-hardcore band is one of my favorite bands to emerge onto the scene since the 2010s. This song is from their powerful album Keep You (2014). Just like the rest of the album, “Repine” is full of passion and energy. Looking forward to banging my head and feeling all the feels as I pelt along to “YOUR WICK WON’T BURN AWAY!”

Their latest release Pale Horses (2015) is one of my favorite releases of the year. It is a return of sorts to their “older” sound. This song introduced me to the awesomeness that is Mewithoutyou from their excellent album Catch For Us The Foxes which has influences countless bands at this festival!

“Hearts Unknown” by The Menzingers

They have been creating quite a tidal wave in the scene these last couple years and they wave run us all the fuck over when they released Rented World (2014). That album is damn near perfect and my favorite album of last year. Although it is extremely difficult to narrow it down to one song as a favorite from this album I have to go with this one. I can’t wait to drunkenly scream, “HEARTS UNKNOWN BEAT ALONE, WHOSE GOD WILL SAVE YOUR SOUL!”

“California’s Burning” by Smoke Or Fire

It has been over a decade since I have seen them, which is oddly enough the last time I was at the fest. This is the first track from their debut album Above The City which brought them instant comparisons to Against Me! and The Lawrence Arms. I have never lived in California and I don’t wish it any ill will, but I will lose my mind when I hear the opening chords to this song!!!!!

“Our Holy Ghosts” by The Felix Culpa

This band is the best kept secret on this tour! Don’t believe me?! GO SEE THEM AND PUT ME TO THE TEST! This progressive indie band with post-hardcore elements will blow you away. They broke up in 2011 and thankfully reunited last year, I was able to see them and it was simply incredible. They hold nothing back and neither will I when I sing along,

Looking forward to these and so many more! I’m literally counting the sleeps until I’m in swampy Florida ‘Festin’!

“Dirty Cigarettes” by Beach Slang. Amanda and I have an affinity for Beach Slang. I saw the when they opened for Cursive earlier this year and made sure to catch all of their set at Riot Fest Chicago. Lead singer, James Alex, delivers ego-less honesty from a wooden spoon, then slaps you with it after every line.

Andrew W.K. — “Party Hard.” Like Trevor, I absolutely love partying. And what better way to party than with the King of Party himself, Mr. Andrew W.K.?! We had the pleasure of speaking with this humble fellow earlier this year — Andrew W.K. Interview.

As Friends Rust (Reunion) — “More Than Just Music, It’s A Hairstyle.” This is a band my friend John Claytor got me into a few years ago. At that time, they had been broken up for nearly a decade and were seemingly staying that way. Then they announced reunion shows. I missed every one of them but I will not miss this one!

Wolf-Face — “I Wanna Be A Homo(sapien). If you’re howlin’ for a good time, catch these teenage wolves at The Fest! You won’t want miss out on partying with this pack!

The Fest time of the year is the best time of year — and it’s the annual anticipation that has carried me through one of the most decisive years of my life so far. Graduating college, finding an actual adult job, traveling to new cities, and addressing the evolution of me has been trying, but I often credit the music I listen to as the element that makes it all work.

I’m pumped to party it up with friends from all over the world and my own backyard, but the best part will be screaming along to these epic songs.

If there were ever a song to describe the coming of age and addressing the relationships in your life, it’s this hit from Worriers’ latest album, Imaginary Life. There’s something motivating in the way that Lauren Denitizio barks self-assurance in the face of realizing that relationships and people aren’t always the best fit for the long-term. Plus it just sounds badass to shout out how no one will slow you down.

There’s that moment when you feel like you’re suffocating from life- and then there’s Spraynard to bring you right out of it. It’s one of my favorites from summer release Mable, and just 30 seconds in, you’ll see why.

When Patrick Graham belts out his frustrations in the stubborn, struggling chorus, it’s the moment that someone understands just how heavy life can feel. Having a bad day? Blast “Buried” and feel the tension just release from your whole body.

I can’t sit still the moment I hear Cayetana pump through my speakers. It’s catchy and subtly heavy. Hearing Augusta Koch’s reassurances of a better, blossoming future is the sort of motivation you needed to be reminded of- and it’s the right sort of shout I want to make when the Philadelphia band closes out Fest.

“Young and Alive” by Beach Slang

To be honest, I really couldn’t pick just one Beach Slang song to put on this list. I could (and have) screamed with every fiber of my being when I’ve seen the Philly band command the crowd.

But there’s a soul seducing element in “Young and Alive,” a ripping promise of eternity spent as an invigorated, passionate being. The very spirit and truth to what punk is lies in the heart of this song, an energy ready to riot. To me, that’s what Fest is about.

The debut of Oso Oso’s full-length album, Real Stories of True People Who Kind of Looked Like Monsters was one of my most-anticipated of 2015, and the reasons are endless. The audio flavors wrapped in Oso Oso are unique to anything I’ve ever found, and “Wet Grass” has some of the most punching elements of the album. The truths of interacting with a heartache layered in a rollicking, playful energy lifts the song into palpitating momentum.

Andrew WK “She Is Beautiful”
Maybe we’ll end up partying with Andrew WK and he’ll sing this song to me?

Menzingers “I Don’t Want To Be An Asshole Anymore”
Sometimes I can be an asshole and every time I feel guilty about it, I sing this song in my head. Plus I took some amazing photos of them in Brooklyn, NY despite almost getting kicked in the head.

Chris Farren (HE WILL PLAY THIS!) “Songs For Teenagers”
Love this version, love the Gaslight version, can’t wait to hear it live!

Tiny Moving Parts “Sundress”
First song I ever heard from them and favorite.

The World is a Beautiful Place and I Am No Longer Afraid to Die “Getting Sodas”
I used this song for our Asbury Park, NJ video and I’ve loved it ever since. TWIABP ended that show with this song AND a major plus is that their violinist saved our night by getting us press!

Check out Garrett East’s “Top 10 Bands to listen to before Fest 14”!