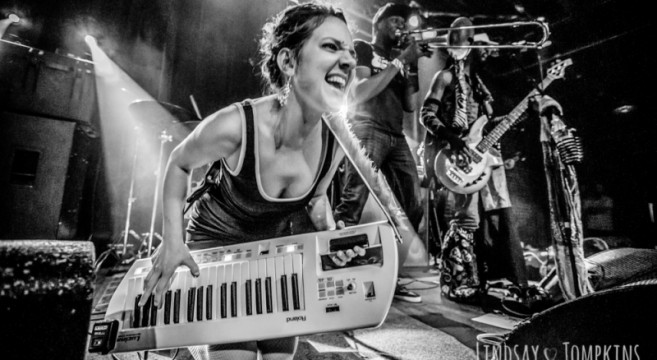 You wanna know what’s phat? Yo Mama! Haaa, yeeaah, that’s right. 😉 Look, I only know because I’ve seen it, Ok? — Yo Mama lays that funky badonk down just right!

Ok, no, for real though. If you’re not familiar with Yo Mama’s Big Fat Booty Band, it’s time for you to experience some of that sweet spankin’ funk that I know so well (Enter to win tickets below). Rocket out to the most sublime, funktified limits of our known world and you will find the super rare jelly sauce that provides that ultimate, galactivated relish that you’ve been craving for your space jam taco. Mmm… Damn, that’s some good shit! I’m talking about Yo Mama’s Big Fat Booty Band.

Alright, enough talk, now your ears are prepared to taste some of that ever-lovin’ funk:

It’s actually been a minute since that sexy nugget was released, but this is one of the songs that originally drew me in, not to mention that perfectly-fitting name. How can you not wonder what it’s all about? 🙂

It was just announced that Yo Mama’s Big Fat Booty Band are working on their fourth full-length album, Funk Life, dropping in spring 2015. “Funk Life will deliver all of the classic Booty Band elements of deep grooves and smoking horns, with a smattering of special guests.” – Mason Jar Media. We’re excited to hear the new tunes.

Until then, here’s a sample of their latest offering, from their album, Onward!

You can tell by the sound that these guys have been keeping busy around the block, musically speaking. Their righteous blend of funk, rock, soul, and hip hop has been brewing and stewing for a good decade. They’ve played at festivals and toured the country extensively since their humble beginnings in 2002. Last year, I saw them play at AURA festival and again at the Social in downtown Orlando. And, to tell you the truth, this band is one of the festival scene’s best kept secrets, but I’m letting that freaky cat out of the bag now because it’s getting too crazy to hold anymore.

Please, for the love of funk, do that booty of yours a big ass favor: Come out to the Social in Orlando on Saturday, October 18th and boogie dat butt!

I hope to see you there! Want to win a pair of tickets to this show?!

4. *Once all of the above is complete* – Email contests@showsigoto.com With Your Name, and put the ‘BOOTY’ as the Subject to complete your entry. Thanks!