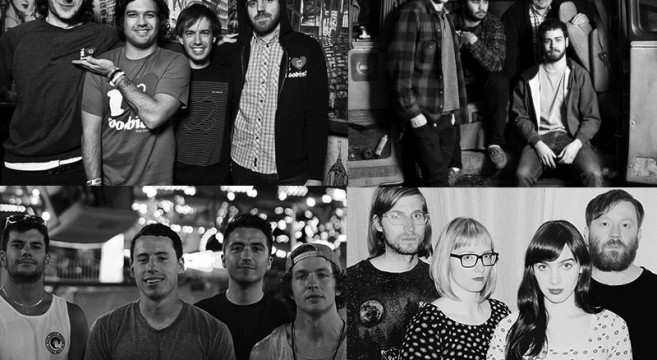 The last time A Great Big Pile of Leaves came to town, they were opening for emo/punk heavyweights Into It. Over It. and The World Is a Beautiful Place and I Am No Longer Afraid To Die. This time, they’re coming around to headline another stacked line-up of admired bands on the first ever “Top Shelf Records Tour” with Prawn, Diamond Youth, and Field Mouse. A Great Big Pile of Leaves are easy to get into and endearingly quirky. Whether it’s vocals whistling out a back beat (“Snack Attack”), math rock inspired time signatures (“Fun in the Sun”), or the relaxed vocals of lead singer Peter Weiland; there’s something about all the moving parts of AGBPOL that make it catchy.

Prawn has been producing their signature style of solid, lyric driven rock and roll for seven years now. Before, and continuing through the journalist-created lull and revival of the emo music scene, they’ve been touring and releasing records the entire time. Their last release, Kingfisher, is a natural progression of their sound that expands with orchestral touches layered throughout the otherwise post-punk pedigree. It’s great for all the right reasons and is best taken in like a fine whiskey to savor how something seemingly straight forward is actually quite complex.

Diamond Youth‘s latest release, Shake, is just an implication of how you’ll react to seeing them live if their songs and live videos are an indication. Take their track “Sunburn” for instance.  It’s pop music at it’s purest, guilt free and full of energy, falsettos, and catchy sing-along parts. (They got whoa’s for days.) A band that first got me into the “pop” side of the independent/punk scene was Ultimate Fakebook, and Diamond Youth is reminiscent of that in their own, cool way. It’s exciting to be able to catch them at a small club for now as they have the pop potential to land on mainstream radio or on a cable network countdown.

P.S. The artwork for their album Don’t Lose Your Cool has a dog with glasses on it. I want to hang out with them. 🙂

Field Mouse is beautiful and mesmerizing. The feeling this band gives me makes me nostalgic for a place I’ve never been to. Where everything is rose-tinged, there is no stress or pain because “everything is going to be okay,” and all the girls wear polka-dot dresses while holding hands with boys in white v-neck shirts and dark washed denim. There’s soft harmonies, fuzzy guitars, and tempos to pull you in to hug this someone new who feels more like an old friend you lost touch with.