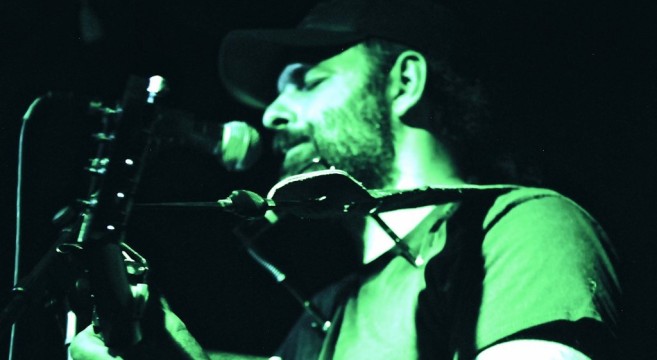 TICKET GIVEAWAY: Tim Barry + Bartender Brian | Why YOU Want To Be Here | Coming to The Social Orlando | Wednesday, April 16, 2015

The Tim Barry train is pulling through Florida at the end of April. Known for hopping railcars and going wherever life takes him, Tim’s brand of folk is about as raw as it gets. He speaks truth… no more, no less.  Some of it heart wrenching and some of it tongue-in-cheek fun.  All of it, however, hits you right where it counts and you gotta love the stories he’s singing.

Former front man of punk band Avail in the ’90s and early ’00s, Tim has been honing his solo folk singer craft since 2005.  In that time he’s released 6 albums, including last year’s Lost & Rootless. Tim has a knack for connecting with his audience. In fact, he may even leave the stage to join you for a sing along on the floor. In the handful of times I’ve seen Tim, he loves to get close to the fans and treat them like friends that are just hanging and having a good time.

Once, when his voice gave out, he refused to not continue the show, claiming he’d never missed one yet and wasn’t about to start now. So he strummed his guitar in the midst of the crowd as they belted out each and every one of his words on his behalf.  And, that’s what you’ll get at every one of Tim’s shows … sincerity and good times.

Opener, Bartender Brian (pictured at the top of this article) is one of Orlando’s favorites. Here’s some of the great things we have to say about this tremendous singer/storyteller:

“Bartender Brian’s a hell of a musician.”

“the kind of tunes where you want each syllable emphasized.”

“You can feel every ounce of his soul being passionately forced through his beard from the moment he takes the stage.”

“He was charmingly unaware of the fact that he was kicking ass, and understandably distracted by the fact that his wife was due to give birth at any second.”

And, sometimes his wife even joins him onstage. (P.S. Congratulations on the new addition to the family!) 🙂

“She perfectly complements him, elegantly slicing through his dirty, shredded vocal chords that he forces honesty through so beautifully.”

“he’s the only fucker to make Mitch cry at The Social.“

You can catch Bartender Brian, Tim Barry, and previously unmentioned solo artist, Sam Russo, performing  at the Social in Orlando on Wednesday, April 22, 2015 (win tickets below).

Want to win 2 Tickets to Bartender Brian and Tim Barry at The Social in Orlando, FL on Wednesday, April 22, 2015?! There are several ways to enter!*

*Fill our the entry form and Complete at least one of the tasks below (#1-5, bonus points for completing them all).

WIN TICKETS: We’re very excited to be giving away ticket to see TIM BARRY, Bartender Brian, and Sam Russo at The Social…

Get Tickets to Tim Barry + Bartender Brian In Orlando HERE! (You can always give them to someone else if you win)