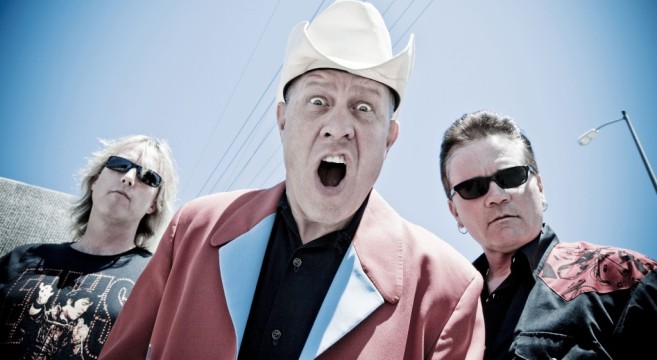 Reverend Horton Heat have been playing their unique brand of punk and rockabilly for nearly thirty years.  I was familiar with their name but I never really listened to their music until I played one of the Guitar Hero games and heard “Psychobilly Freakout”.  This song was so different than anything I had ever heard.  I ended up checking out some of their other material and I knew I had to see these guys live.  Unfortunately, they are one of those bands that I ended up missing every time they come to town.  Their latest tour will be hitting The Social on Thursday November 13, 2014 and I will definitely be there this time (win tickets below).

Jim “Reverend Horton” Heath formed the band in Dallas in 1985.  The Rock N’ Roll lifestyle ended up being too much for his wife and she ended up leaving him along with their kid and dog. This was a huge bump in the road but Heath continued to follow his dream.  The loss of his family ended up fueling the lyrics of one of Reverend Horton Heat’s most personal songs, “Where In The Hell Did You Go With My Toothbrush?”

In 1990, the band was signed to Sub Pop and released their first album, Smoke ‘em If You Got ‘em.  In 2014, Reverend Horton Heat just released their eleventh studio album, entitled REV.  It is their first album since signing with Victory Records in 2012.  Expect to hear some songs from REV (like “Let Me Teach You How To Eat”), as well as a career spanning set of fan favorites and classic covers. Want to win Two Tickets to Reverend Horton Heat Orlando at The Social on Thursday November 13, 2014?! There are several ways to enter!*

*Once you complete at least one of the tasks below – Email contests@showsigoto.com with Your Name, and put the ‘REV’ as the Subject to complete your entry. Thanks!

*Once you complete at least one of the tasks above – Email contests@showsigoto.com with Your Name, and put the ‘REV’ as the Subject to complete your entry. Thanks!