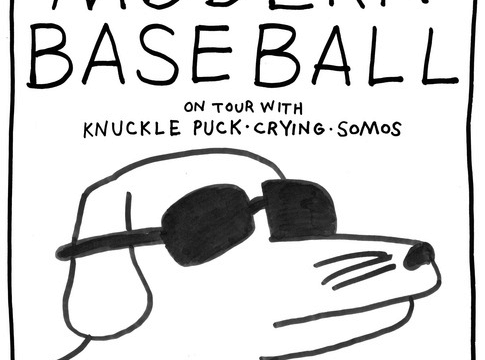 There’s going to be a party at Backbooth Saturday, consider it an insight into the current state of fun sing-a-longs/emo/pop punk/pizza parties. Here’s a breakdown of the line-up and why you should attend (win tickets below).

If Modern Baseball’s music was encapsulated into a single person, they would be your best friend because they would just get you since their lyrics are so damn relatable. For example, their song “Rock Bottom” is about being into someone that has someone else to make out with, which means you shouldn’t hang out with them, but you do anyways. After eating a too much pizza and drinking too much coffee, you skip class to “watch Planet Earth and brainstorm tattoos” together because “whatever, forever.”

That’s modern romance if I’ve ever heard of it: pizza, naps, and whatever (fucking) forever. When you think about it, the situation in the song is kind of a bummer, but since it is upbeat, you will jump around and finger-point because Modern Baseball will takes your life situations and spin it into a good time.

Knuckle Puck is so pop punk they are on the front lines of defending the genre. Their video for “Give Up” will preview everything you can expect (passionate fans, mosh pits, solid songs) in under a minute and a half.

You’re probably thinking, “There’s a band called Crying? Huh?” I don’t know the band Crying as well as the others on this line-up but my impression from listening to a handful of songs before you is that there are a lot of bleep blops and it’s like a video game, if a video game had a backing band.

SOMOS. There’s an adage I like to stick with and that is “pay taxes, drink water, and always see Somos.” The band was here a little over a month ago for the Orlando Pre-Pre Fest event and they played to a full room who rocked, swayed, and danced all over the place. Somos packs a punch. They are powerful yet controlled and as catchy as the songs become, the vocals carry you to a higher plane. Give their track “Dead Wrong” below a shot.

Cayetana was last here with Pup and The Menzingers and I’m stoked that they’re back again. Earlier I mentioned that if Modern Baseball was a person they would be your best friend. Well, I want to be best friends with Cayetana. They bring out the jams and I really hope for the best, brightest future for them and I’ll be up front singing along to “Hot Dad Calendar.” Want to win Two Tickets to Modern Baseball at Backbooth in Orlando, FL on Saturday, December 6, 2014?! There are several ways to enter!*

P.S. Modern Baseball are playing a Free acoustic Instore performance at Park Ave CDs before their show at Backbooth.