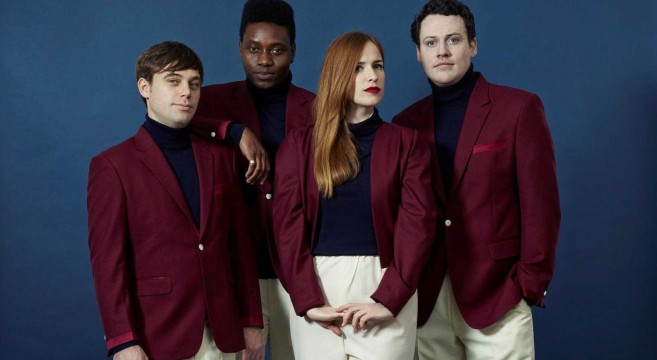 Metronomy radiates dapperness — they’re casual yet classy. They produce the soundtrack to a dance party where men in tweed jackets twirl around girls in mid-century updos. The band dissects from the quadratic formula of indie rock and supplements with layered harmonies and keyboard tones that channel just enough twee to make it endearing. This English band began as a bedroom project of founder and frontman Joseph Mount, fifteen years ago. It evolved from a DJ/laptop based act, consisting of solely Mount on the first two records, then grew into a four piece band from the third record on. Together, under Metronomy, they have released four studio albums and toured since 2006. (It’s more complicated than that because the lineup has changed over the years but that’s the gist of it. 🙂 ) The bands last record, Love Letters, has had the most commercial success to date, charting in the top ten in the UK and France.

The video for the titular track directed by Academy Award winner Michel Gondry below is sonically parts 5th Dimension’s “Age of Aquarius” (we’re talking four-part harmonies) and visually reminiscent to a vintage PBS children’s special. Like with anything Metronomy related, it’s highly artistic and effortlessly hip.

Something else that sets Metronomy apart is their live shows, which often includes light shows and catchy dance routines. Check out the vibe of what it’s like in the video below.

Metronomy will be performing on Friday, October 10th at The Social in Orlando, FL with Tampa’s Zulu Wave. This will be a treat considering it will be at an intimate venue when it’s common for Metronomy to play on the bigger festival circuit overseas. Check out SIGT Editor, Mitch Foster’s personal favorite, “The Look,” below and enter to win tickets to the show courtesy of the band!

Want to win a pair of tickets to this show?!

4. *Once all of the above is complete* –Email contests@showsigoto.com With Your Name, and put the ‘METRONOMY’ as the Subject to complete your entry. Thanks!