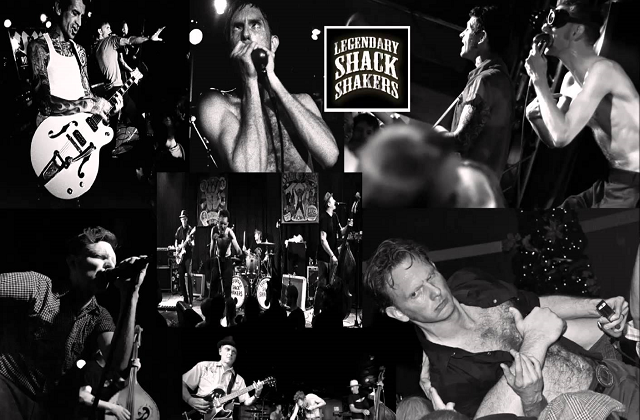 A decade or so ago, I had what has stood the test of time as my single most unexpectedly thrilling live concert experience to date.

I have The Legendary Shack Shakers to thank for it. Celebrating their 20th anniversary this year, the band will unleash holy hell at Will’s Pub on Feb. 5 (a Friday). It’ll be the hot ticket of the weekend; I’m calling it right now. And your sweet ass can win tickets (ENTER BELOW).

There were songs certainly — “Clodhopper” and “Shake Your Hips” and “CB Song” are still adrenaline-fueled favorites — but they took a back seat to the show. It was a spectacle before it even started, which is to say I saw their wide-eyed and wilder-haired Jerry Lee Lewis lookalike of a singer pounding can after can of Red Bull. Little did I know he was prepping himself for all that would follow.

Things that happened (in rapid succession) included: singer J.D. Wilkes climbing the wall and hanging upside down from ceiling pipes to play a harmonica solo; the singer punching a light bulb out of an overhead light then wearing the casing like a war helmet; a bassist that repeatedly kicked an old drunkard of a man throughout the set (both kicker and kickee appeared to really enjoy the exchange); a shirtless Wilkes doing The Worm across broken glass at the tail end of the show.

The blood we saw once the proverbial smoke cleared was certainly not stage blood. The splashes of red across his chest were the real thing. As for the as-confused-as-he-was-increasingly-angry venue owner? He wasn’t going out of his way to pretend either. I’m not sure the band ever got asked back, but that didn’t matter terribly. They took their shot and it was a glorious one at that.

I have no photos to prove all that happened. I just have this series of images seared into my memory. It was akin to someone inviting a carnival freak show onto a live stage for One Night Only, then sitting back to see what would take place.

I’m not saying any of this will happen when The Legendary Shack Shakers land in Orlando on Feb. 5. At the same time, I’m not saying it won’t. There may, in fact, be blood.

Want to Win 2 Tickets to THE LEGENDARY SHACK SHAKERS at Will’s Pub in Orlando, FL on Friday, February 5, 2016?! There are several ways to enter!*

STEP 1: Complete one of the tasks below*
STEP 2: Fill out the entry form

“Most unexpectedly thrilling live concert experience to date.”This is going to be crazy — Legendary Shack Shakers at…