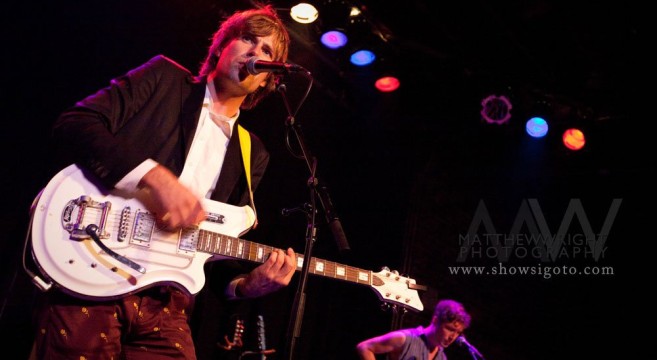 TICKET GIVEAWAY: Islands is coming to The Social, not the Unicorns, but close enough for now

This Thursday, September 11th, 2014, Montreal-formed/LA-based Islands will bring their whimsical and ambitious take on indie rock to Downtown Orlando at The Social. Anyone that is a fan of the Unicorns, Arcade Fire, Wolf Parade, Modest Mouse, Born Ruffians, of Montreal, Fiery Furnaces, or the like, should not miss this show.

Islands have been around in various forms since their 2006 debut album Return to the Sea. When that album first came out, I had it on heavy rotation as it was the proper successor to the Unicorns’ classic 2003 release Who Will Cut Our Hair When We’re Gone?. Frontman Nicholas ‘Diamonds’ Thorburn has been, and still is, a staple in the indie rock scene. Thorburn, a founding member of the Unicorns (just recently reunited to open for Arcade Fire), part of the indie rock ‘supergroup’ Mister Heavenly (boasting members from Man Man, Modest Mouse, and the Shins) and Human Highway (a collaboration with indie rock legend Jim Guthrie).

Thorburn, and his like, were all part of the burgeoning early-2000s indie rock movement. Their brand of indie rock music was authentically messy, a little on the lo-fi side, and aesthetically experimental. Islands was an initial crystallization of what indie rock was becoming; a melding of independent rock roots with catchy hooks and unconventional concepts (see also “Rough Gem”).

At the time, Islands’ debut was successful in its ability to veer away from the commercially formulaic style that has been made all too popular today. While indie rock has surely become a lot more generic over the years, Islands has maintained by remaining a little zany and still having something relevant to say amongst all the silliness.

After the Unicorns disbanded in the early 2000s, Thorburn formed Islands and released their first album Return to the Sea. Since then they have gone through a mixture of different lineups and have had a slew of releases: 2008’s Arm’s Way, 2009’s Vapours, and 2012’s A Sleep and A Forgetting. Each of these releases finds Islands moving away from their quirky and intelligent spin on indie rock to a developed and more mature tone, while still implementing similar experimental elements. Their most recent album, 2013’s Ski Mask, takes on a darker tone while still incorporating their familiar sound (catchy upbeat drums; off-kilter use of familiar instruments).

The fresh youthfulness experienced in the initial post-Unicorns Return to the Sea days have given way to a softened, more reflective and introspective take on their style. However, despite all this growing up, Islands, with all their skill, experience and rock prowess, still rock out live!

4. 'Email' contests@showsigoto.com with your name, and put the Artist Name as the subject.