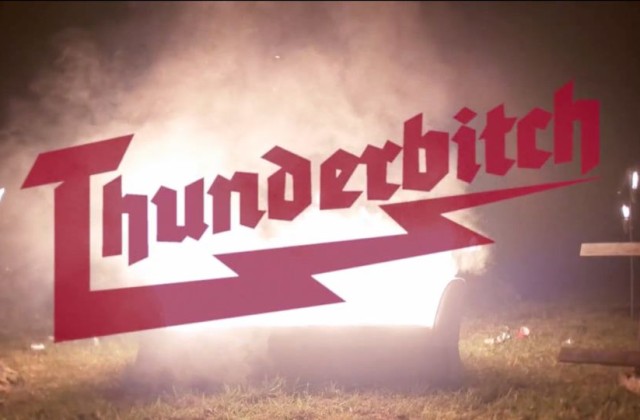 Howard has created a collection of tunes that sound like Wet Willie as interpreted by The Strokes. “I just wanna rock n’ roll,” Brittany sings in some of the most transparent lyrics ever. “I just wanna put it inside of you” would be less subtle. Either way we would invite the imposition.

I just wanna put it inside of you.”

She accelerates that theme throughout the record. It feels like a self aware twenty-something artist who is thrown the keys to a metaphorical Ferrari and given a clear stretch of highway on which to explore its power. The result is a record that would be legendary without its juxtaposition to Alabama Shakes’ Sound and Color, one of the most impactful pieces of pop art in the last fifteen years. Thunderbitch showcases an extreme, balls-to-the-wall version of Howard.

She enlisted members of former tour mates Clear Plastic Masks and a band called Fly Golden Eagle to create Thunderbitch. But, Howard’s muscle-fiber-shredding vocals, nerve-fraying guitar, and old world soul are rightfully in the point position. The record puts you in the motorboat seat from the first note and does not let you come up for air until everyone involved is left gasping and fully satisfied. Thunderbitch is streaming on the intertubes for free, but a vinyl copy would be well worth the effort. Brittany Howard has created a timeless rock n’ roll record that appeals to a broad range of sensibilities and tastes. It is straight-ahead rock n’ roll delivered in a way that transcends expectations. This is an ass kicking album that appeals to the visceral; and it belongs on heavy rotation.