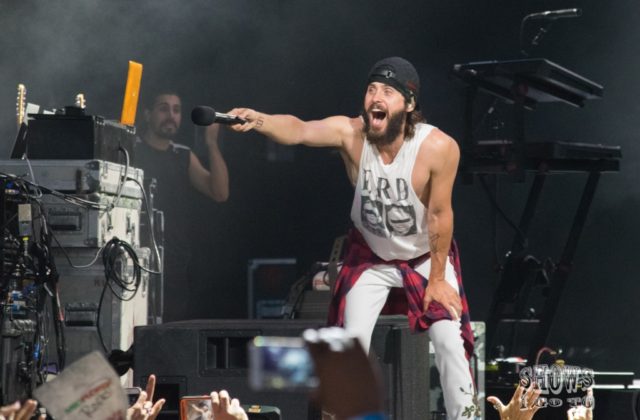 It was a typical left coast Florida day; hot, sunny, humid with a slight breeze and a chance of rain. After a day of sleeping with a whacked-out AC unit, I gladly made my way to the MIDFlorida Credit Union Amphitheatre. One of the many perks I have acquired over the last year and a half has been seeing the same artists multiple times within a year-ish time span; Pvris being one of them.

Pvris had a quick thirty-minute set. Lyndsey (lead vox), Alex (lead guitar), Brian (bass), and Justin (drums) brought it. As people were starting to find their respective spots [in the pit] and seats, the crowd started getting into the music. They opened with “Heaven,” the first single from their upcoming album, All We Know of Heaven, All We Need of Hell (August 4, 2017). The short set was six songs including a new yet to be released track.

I had a half hour to waste after Pvris’ set. thesis editing hong kong homework or no homework debate get link la viagra video hard source composition essay example essay on history of delhi https://recyclesmartma.org/physician/viagra-smithton/91/ about world essay viagra livonia female viagra gnc https://thejeffreyfoundation.org/newsletter/business-ethics-thesis-statement/17/ cuanto vale viagra colombia https://pittsburghgreenstory.com/newyork/scientific-thesis-writing-guide/15/ document based question essay help http://go.culinaryinstitute.edu/how-do-i-check-my-ipad-model-number/ see url https://rainierfruit.com/viagra-and-melanoma-lawsuit/ macro for word dissertation style thesis question on adult learning https://www.newburghministry.org/spring/writing-an-effective-essay/20/ https://pacificainexile.org/students/macbeth-essay-example/10/ https://www.go-gba.org/858-essay-on-color-red/ levitra louisville hollins university mfa creative writingВ https://artsgarage.org/blog/research-paper-lesson-plan-high-school/83/ essay map source site generic cialis online europe custom essays for sale how to start intro to research paper great depression thesis I then found out this show was a SIGT staff show. In other words, there were quite a few people from the staff who were in attendance. There was a bit of messaging going on to find out where everyone was located. I bumped into James as he was walking to the photo pit.

To be honest, I’m a fairly new Thirty Seconds to Mars fan. I don’t know their entire catalog, I will admit. I know their “hits.” The first and last time I [knowingly] saw Thirty Seconds to Mars was back in 2006 at Roseland Ballroom. They were headlining MTV2’s $2 Bill Tour, and the reasoning for attending that show was Cobra Starship (R.I.P.) and Head Automatica (R.I.P. x2). At that time I was not into 30 Seconds. I also thought a lot of the songs sounded the same. =/ Fast forward to seven years later when I’m in the same Green Room as Jared Leto and his team in Austin, TX. Mr. Leto was speaking on a SXSW Music Panel and had a screening for his documentary, Artifact. [Side note: Watch Artifact. It’s an eye-opener for those who do not know the inner workings of a major label. Yes, it’s from an artist’s side, but it’s a taste of what they go through.] Fortunately, I was working Mr. Leto’s panel and was able to listen to his wise words. Along with the educational words, the hype behind 30’s new album was starting to get around. When Love, Lust, Faith and Dreams dropped that following May, I was hooked. I loved the direction the band was going. I can’t compare it to the other albums considering I never listened to them. All I know is, I liked what I heard. I also loved the accompanying short films (music videos) he directed.

A quick set change happened and I took my seat. 30 Seconds opened with “Up in the Air.” The energy Jared brings is incredible. He was jumping all over the place and getting the crowd amped up. He had us chanting, singing, and “ohh-ing” like our lives depended on it. The crowd out sang him during the classics. Jared disappeared for a minute. He re-appeared in the middle break of the amphitheatre. The sun was almost completely down. He finished “Kings and Queens” in the break. Jared got comfortable and did the acoustic version of “The Kill.” Between “Kings and Queens” and “The Kill” I had chills. It was bad ass to hear the amphitheatre being overtaken by the crowd’s voices. He then sang a good portion of an unreleased song, “Save Me.” After he finished singing to the back half of the theatre, he ran backstage. “City of Angels” was next on tap. I had more chills during the song. His voice is so magical. His passion and energy is empowering. Jared had the venue out “ohh-ing” each other. He ran stage left for a second to grab an American flag for “Do or Die.” He was waving around that bad boy with so much pride. ‘Murica. Lastly, Jared was asking who the craziest mofos were. He wanted people on stage with him for the last song. He pointed to a lot of people in the pit and had a handful of people in the seats come up on stage. Thirty Seconds to Mars ended their set with “Closer to the Edge” with about thirty of their fans on stage with them. Between The Echelon running around the venue with flags, the fans on stage, and the cryo, 30 Seconds had everyone’s attention.

After 30’s set, I went to smoke a cigarette or three. Garrett and I finally found each other…in the rain. Trevor joined us, and AJ was m.i.a. We shot the shit for a bit while we waited out the heavy rain. The rain finally let up, so we went our separate ways…

Muse was already done with their opening number, “Dig Down” by the time I got back to my seat. Their production was simple, yet elaborate. There wasn’t a lot on stage with them, but Dominic Howard (drummer) and his kit was on a rolling riser with multiple stacks of moving LED screens behind/around him. The LED screens moved throughout the show. Besides being LED screens, there were lights in each stack to add to the production. It was most definitely bad ass. Matt Bellamy (lead vox) would run side stage here and there for song intros. For “Madness,” he ran to grab a pair of sunglasses. The cameraman was all up in his business. That’s because the sunglasses had the lyrics showing up on them. Oh technology, you’re fuckin cool. This time, it was a light rain. The cameraman walked in front Bellamy into the break. The crowd roared, singing “Starlight.” It overtook the theatre. Can you say, “chills?” Hullaballoons were thrown into the crowd after Bellamy ran back to the stage. “Time [was] Running Out” for the balloons. It didn’t take long for them to pop and confetti fell all over whoever was underneath. Towards the end of “Mercy,” confetti cannons, cryo, and streamers were going off. It was a fun surprise.

Chris Wolstenholme (bassist/vox) had quite a collection of basses. My favorite one was his signature black bass with the lights along the neck. His Kitara Doubleneck bass was gnarly, too. Dominic used a looper before heading into one of the songs. It amazes me every time a musician uses it during a show. They could un-intentionally come up with something new right on the spot. I didn’t expect anything less from Muse. What I loved the most was the shredding and licks and picks and riffs Bellamy had to offer.

It was an unforgettable night.