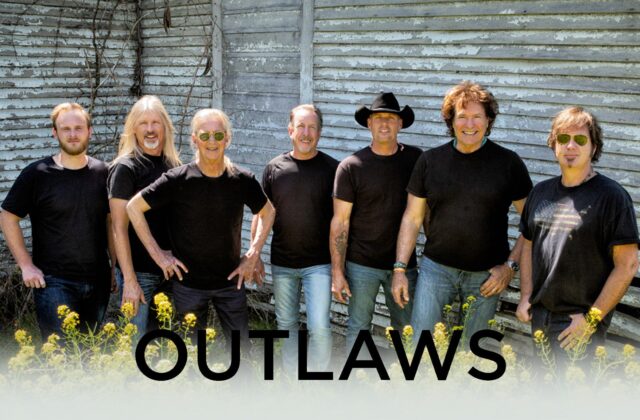 Following in the footsteps of such great bands as The Allman Brothers and The Eagles, The Outlaws developed their own high-powered, guitar-driven country-rock, complete with exciting self-penned music, and stellar three-part harmony in the 1970s. They’re reuniting for the “8th Annual Green Grass & Yuletide Jam” with special guest Pat Travers Band provides opening support on Thursday, December 8th. 2022 at The Plaza Live in Orlando, FL. GET TICKETS HERE! The Outlaws were born to the blue-collar port city of Tampa, Florida in the early 1970’s. The band was made up of Hughie Thomasson, Henry Paul, Monte Yoho, and Frank O’Keefe. At Hughie’s urging, Billy Jones moved back to Tampa from Boulder, Colorado in1972 to complete the original five-piece lineup. Joining the likes of Tom Petty and other regional acts at the time, The Outlaws quickly became a favorite of the Tampa college crowd. With the help of newly recruited manager Charlie Brusco, the band set its sights on taking the show on the road. Earning a reputation as a great live band, they lit up the clubs from Macon to Nashville and honky-tonks throughout the southeast.

At Ronnie Van Zant’s urging, Lynyrd Skynyrd manager Alan Walden became management partners with Charlie Brusco, and the two men brought label executives to the up-and-coming band’s doorstep. Clive Davis signed the band to his newly formed Arista label in the spring of 1975. The Outlaws’ debut album rode the momentum of AOR classic “Green Grass and High Tides” to #13 on Billboard’s Hot 100. With substantial success in the live concert arena and on the strength of repeated chart-topping records, The Outlaws established themselves as premiere players in the phenomenon that came to be known as Southern Rock.

Chris Anderson, lead guitarist and longtime Outlaws bandmate, brings his considerable talent as a player, singer, and songwriter to the band. His solo records for Sony in the early 90s and his collaboration with Dickey Betts, Dan Toler, Warren Haynes and The Outlaws over the years have helped establish him as one of Southern Rock’s most notable players. Billy Crain has become a household name in the southern rock family of exceptional lead guitar players. He has enjoyed significant success as a songwriter with his songs cut by such artists as the Dixie Chicks, Poco and Martina McBride. With the Henry Paul Band in the late 1970s, he developed a large following with his legendary musicianship, and with Chris Anderson, forms one of the all-time great lead guitar teams in rock and roll.

Bassist/Singer/Songwriter Randy Threet became a member of the Outlaws in 2005 through his previous work with Henry in the Country group Blackhawk. He has also played with such artists as Pam Tillis, Larry Boone, Trisha Yearwood, Buddy Jewel, and toured overseas in support of our troops. In 2004 he worked on the USA Network show “Nashville Star”. Randy’s high energy, great harmonies and solid bass work make him a popular part of “The Outlaws”.

The most recent addition to the band is keyboard player. Singer/songwriter Jon Coleman. Coleman found his way to The Outlaws through stints with Lee Roy Parnell and the super-group collaboration of Brothers of the Southland, which featured Jimmy Hall of Wet Willie, Dan Toler of The Allman Brothers, Steve Gorman of the Black Crowes, and Henry Paul.

Through sheer determination and commitment to the legacy of this great band, the most recent line-up of The Outlaws sets its sights on its musical future, while remaining true to the unique character of The Outlaws past. Don’t miss The Outlaws Thursday, December 8th. 2022 at The Plaza Live in Orlando, FL. GET TICKETS HERE!

We’ve teamed up with AEG Presents Southeast to give you a chance to WIN (2) TICKETS to see THE OUTLAWS at The Plaza Live on December 8th!