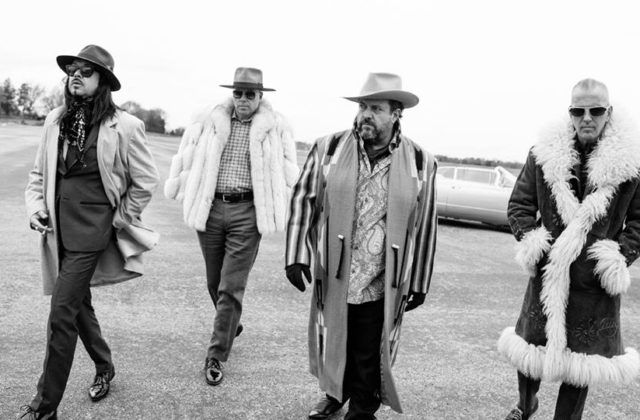 My first love’s dad took music pretty seriously. The year was 1994 and he did not have time for the country radio hits I was consuming. Clint Black and Garth Brooks lacked the authenticity and chops of Ronnie Van Zant and Neil Young. Neil who? was my response.

He was driving my girlfriend and me to see Christian Slater in Bed of Roses – hopefully oblivious to the ballooning of my drawers induced by the thought of touching his daughter’s exposed thigh in about thirty minutes – when he asked if I’d heard The Mavericks. His buddy told him about this swing-influenced band from Miami playing on country radio right now. They rocked a little, swung a lot, and actually had chops like Van Zant.

Hopefully-oblivious dad put on The Mavericks and lectured about how country music was shit but this, this was different. I eagerly listened, shifting forward in my seat to feign interest while actually trying to grind my now painful erection into another compartment of my jeans.

The Mavericks did not sound like country but they were cool. My friends will not approve. This will kill my bona fide middle class suburban cowboy cred. I have to buy the new record, Music for All Occasions, but no one can know.

My youth holds decreasingly less nostalgic influence at this point in my life. The memory of the car, the arrogant dad, and The Mavericks is not necessarily a pleasant one. But, it was formative in many ways. So, the thought returns when prompted.

Walking up to The Plaza Live in Orlando, on a Wednesday night, to see those same Mavericks over twenty years after the trip to the movies brings a few memories flooding back. More importantly, the scene at The Plaza makes me feel old at a show for the first time.

Mind you, I’m the youngest person here, but most of the people in line ahead of me have diminished motor function and smell of an era where people wore cologne. The Mavericks were a big part of my formative years. They were new to the national scene in the mid-1990s, which makes them feel like one of ‘my’ bands. These folks are too old to have been into The Mavericks.

Cloudy-eyed people who long ago gave up fighting a paunch file in neatly behind me. ‘Oh, we saw the lead singer of this group on Martha Stewart the other day,’ a man in his late fifties says right behind me. My thirty-seventh birthday is still a week away. I’m not old enough to be at a show with people who get their music advice from Marth Stew- oh, shit. Thirty-seven is awfully close to the age Ronnie Van Dad was when I more than touched his daughter’s thigh.

The show is seated. The Plaza Live is an excellent venue– top-notch sound, easy to get a drink, helpful if omnipresent security and ushers. But, seated shows for swing bands make little sense to me. The old folks shuffle in and it becomes clear why there are seats. Everyone is in place well before the show begins. The house music switches to something approximating hype. Lights flash on stage. I shield my eyes in discomfort and realize I should probably watch more Martha Stewart.

The Mavericks take the stage with much fanfare- keys player dressed in all red dramatically bowing, drummer climbing a full story to play on a platform, lead guitar player whipping his hair and sauntering to his microphone. Finally, lead man Raul Malo, cooler than cool, wearing a black pearl snap shirt unsnapped down to this belly button, sparkly red roses on embroidered on either side of his exposed chest.

It Ain’t Over Yet

Seats do not last long. A woman in at least her 80s is helped down the aisle to the front of the stage. A man on crutches dances his way next to her. Arms sway side to side at waist level with a rhythm only a grandmother knows.

Decades working at any craft yields a level of proficiency that can’t be faked. The Mavericks are there. You would have to play for twenty-plus years to nail down swing, country, jazz fusion. A friend describes their music as what you would get if you started a band in Miami, drove to San Antonio, and picked up the musical influence of every stop along the way.

There are nine people on stage. I see an accordion, three-piece horn section, keys, guitars, drums, percussion, spoons. Okay, no spoons, but their presence would not be surprising. A Latin jazz jam session breaks out and suddenly no one seems old. In fact, the crowd looks spry and nimble, words I suppose are only used to describe older people, but the essence of those terms is palpable in the room.

Couples break into dance sessions in the aisles, spilling over to other rows. A party has broken out at The Plaza. Malo, as if sensing the need for an ebb, slows down to play a heartfelt song. He dedicates it to the Pulse nightclub shooting victims. The band has been playing it in memoriam since the shooting in Vegas all too recently.

Halfway through the first verse Malo curses and tells the band to stop. We are all too lost in the moment to realize why. ‘Really, you are going to fight during this moment?,’ Malo asks, clearly, understandably frustrated. A man sits slumped over on the front row like he just got leveled. Security quickly ushers the culprits out and Malo starts over. Negativity has no place here. Malo sinks his teeth deeper into our collective loyalty.

Over two hours after the first note rang he still has us firmly in his grasp. No one is sitting. Mobility issues? Not here. The smell of cologne? Dissipated. Our playing field has been leveled by beautiful music played by a first-class band.

Maybe I am getting old. Maybe the bands of my childhood belong on classic hits records. Maybe it’s time for me to wear tube socks and tuck my white shirt into khaki shorts, forsaking a belt. Maybe, just maybe there is something good, even fun about that process. The Mavericks at The Plaza certainly make it seem so.