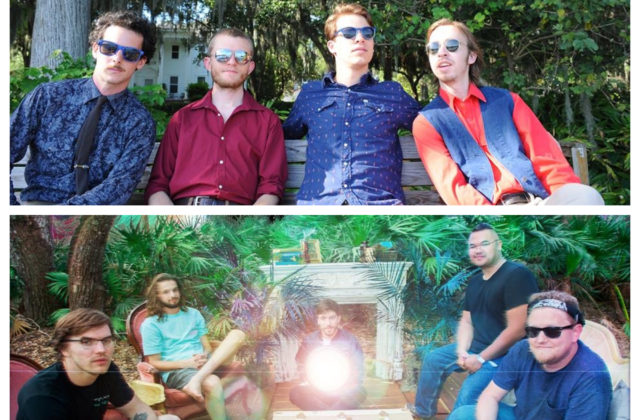 Everything is better in two’s. Alcohol. Bands. So, we’re pairing up two Ten10 Fest bands every week to give you insight inside these artists’ minds and processes.

Fat Night is the funk, the soul, and the groove behind Ten10 Fest. There is no one in Orlando who can do what they do, which is why they left for Chicago! Just kidding. But, the foursome do have roots in both markets and let us in on the good and the bad between the City Beautiful and the Windy City. They also tell all of us ‘Fatheads’ when we can expect new music.

SIGT: So, we’re turning Fat Night into a beer…”Sun Go Down Pale Ale.” What are you guys going to taste like?

Dan: A sweet, sexy, soul quencher for your sweaty body. SIGT: On a typical gig night, what’s your go to beer/drink of choice?

Dan: Beer, dude. Although, a whiskey sour makes for a loose and limber night.

Gabe: I love pilsners. I know, not a very cool answer, but I like them crisp & light so I can drink a good deal.

Nik: Something with whiskey.

Ted: Schlitz in the Midwest and Yuengling out east. Mostly because I find ‘Schlitz’ and ‘Yuengling’ fun to say.

SIGT: What are some differences, pros and cons, between the Chi-town/ORL music scenes? What have you learned about yourselves as individuals, and as a band since moving?

Orlando’s tight-knit & supportive scene helped us grow and find our sound. We feel lucky to have that for this band, knowing we can always come back and feel welcome, playing whatever we want. Chicago has challenged us because people are exposed to so much talent on a consistent basis here. Being able to experience that has shown us what we can do to fill out our shows and sound. We’re excited to bring the freshness back home.”

Gabe: Orlando is home for all of us, so it was the first and only music scene we knew for a very long time. And it was very good to us, and you’ve got a built in community of friends and people you’ve known your whole life. Chicago was very luckily a good fit for all of us. Nik: When we play in Orlando, we know our old friends and fans will show up and electrify the room for us. Being new in Chicago, we have some more pressure to put on a great show. I think being out of our comfort zone is really good for us and is helping us grow. SIGT: All of your Spotify playlists feature a wide array of artists from Steve Lacy, Erykah Baduh, Dr. Dog, NxWorries, Angel Olsen to The Pointer Sisters. Where do you guys find yourselves in the middle of all of these influences while creating your own music? Where do you start when writing?

Dan: Those artists play and perform with feeling, attitude, and soul. We strive to do the same.  We usually don’t try to put anything out there unless it’s something we can all identify with, sonically and spiritually, so if what we’re working on doesn’t feel honest, chances are it won’t last. SIGT: Is there new music on the horizon for all us ‘Fat Nighters?’

Gabe: we’ve been working pretty diligently on a lot of new music.

SIGT: Do you have an official name for Fat Night fans?

Yes, we call them Fats, and call ourselves Fats. No one has objected to it yet.” Gabe: Stevie Wonder, Earth Wind & Fire, and Yes but 1977 Yes. Actually, all three of them in their 1977 incarnations, and they have to dress like it, too.

Nik: Stevie Wonder is going to get sick of playing funerals because he will also be at mine, along with Donny Hathaway and Outkast.

Dan: If Neil Young, Prince, and David Bowie found a way to form some sort of supergroup, that would suffice.

Ted: No music allowed; that would take time away from people talking about how cool and great I was! Just kidding. Let’s get Dr. John, the Meters, and Dirty Dozen Brass Band up in there!

Gary Lazer Eyes may be the famed name of a kitten from the raucous television show Trailer Park Boys, but every shoobie, surfer, and groover from Brevard County to the mainland knows its Florida’s grungiest beach rock band around.  The boys hail from the sleepy beachside town of Melbourne and have garnered some big buzz since their boozy inception onto the scene in 2015.

It would be easy to recognize Austin Young’s tireless vocals out in front of the band. Or, perhaps, Sean Gray’s luscious long swinging locks as he rips on guitar. (L’Oreal shampoo?) However, we got the chance to talk to Shy Spice aka the quiet one aka Stephen Gillen, the man slappin’ the bass. He works at World of Beer when he’s not practicing and touring with GLE, so, that kind of makes him an expert on beer, right?

**(Tip him accordingly at the WOB Altamonte location!<3)**

Stephen: Depends on the season.. lately I’ve been really into sours and wilds but my go to’s in the summer time are IPA’s and Pilsners. SIGT:  What’s your fav beer to drink at a gig?

Stephen: I have a weird superstition of drinking Heineken at show’s. My parents would listen to a lot of The Grateful Dead and their sound really made me appreciate music in general as a kid. I later found out a few members were Heineken drinkers. My dad is too. So, yeah, I always make sure to drink at least one Heineken before a show or have a couple on stage with me. Just one of those things I guess.

SIGT: If GLE were a beer, what kind of beer would yall be? Or whiskey, maybe?
Stephen:

Probably a well whiskey and ginger. Simple dudes with some flavor and a little bit of grunge. Plus, it’s probably our drink of choice as a band if we’re out/playing … shouts to Sean on that.” SIGT:  What’s your favorite aspect of an Orlando show?
Stephen: I would say one of my favorite aspects is that a lot of the venues are pretty intimate. I was able to catch Moon Taxi at The Social last year and felt every note.

Playing well with good sound is important but connecting with the crowd is the other half of it.”

SIGT:  What needs improvement in the music scene around here?

Stephen: I’m not one to say that the music scene needs improvement, but rather that I’d just like to see a bigger push/support for original bands with an original sound. When I’m playing, it’s always humbling seeing unfamiliar faces vibing out to a song. We need more of that. Orlando has a lot of talented artists and local support means a lot. I appreciate you guys at Shows I Go To for doing all you can for the local scene! SIGT:  What was the driving force behind you picking up the bass and really committing to learning?

Stephen: Well I tried guitar at first because I always thought it’d be a cool instrument to learn. But, after attempting to jam with Austin and Sean a few times I realized I’d have to contribute in a different way if I wanted to be apart of what they had going with Otero. They were pretty good haha and I wasn’t even average at that point. So, I put the guitar down, bought a bass and learned that instead. Probably one of the best decisions I’ve made. SIGT: If you could have 3 artists play at your funeral (dead or alive) who would they be?

Stephen: I couldn’t narrow it down haha. But, if I could get The Band and all their guest artists to re perform The Last Waltz with a special super jam performance ft. The Grateful Dead, that’d be cool.