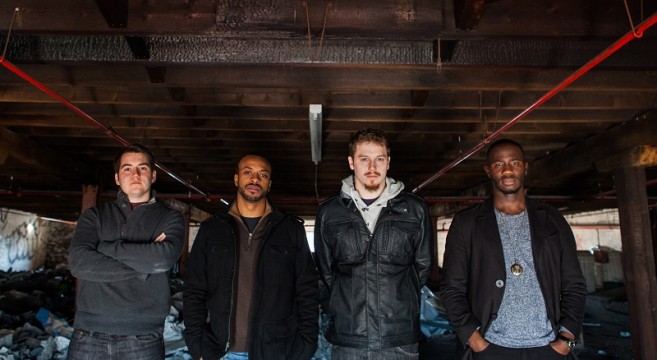 Ticket Giveaway: TAUK | Coming to The Social Orlando | Wednesday, May 6, 2015

If you appreciate imaginative, melodic rock fusion, there’s a show coming up that I would really love for you to see: TAUK. They’re coming to the Social on Wednesday, May 6th (win tickets below).

These guys have been rising fast in the music festival scene, following the release of their most recent album, Collisions. Here’s a song from the album to give you an idea of what they sound like. Words of advice: Prepare yourself. 😉

What makes this band really amazing is that they don’t need a vocalist to move a crowd or to express complex emotions. I’ve seen them three times now (twice at Bear Creek Music Festival and once at AURA Fest) and each set has been packed with loads of raw energy and surprises.

Quite honestly, I can’t think of another band that sounds like them either. They’re almost hard to categorize since they have such a unique, experimental sound. This is probably due to the fact that each member of this four-piece comes from a different musical background.

For me, their music conjures thoughts of wild space missions and epic quests through dangerous worlds. If I ever end up owning a bar on distant planet, I would not hesitate to hire these guys to perpetually hold down the right feeling. Anyway, this show will be my first time seeing these guys outside of a festival environment so I’m excited, to say the least. This will probably end up being one of your new favorite bands. I hope to see you there!

Want to win 2 Tickets to TAUK at The Social in Orlando, FL on Wednesday, May 6, 2015?! There are several ways to enter!*

WIN 2 TICKETS to see TAUK at The Social. “they don’t need a vocalist to move a crowd or to express complex emotions.”Read More & Enter The Contest >>> http://showsigoto.com/tauk-ticket-giveaway/ 🙂

Get Tickets to TAUK In Orlando HERE!  (You can always give them to someone else if you win)