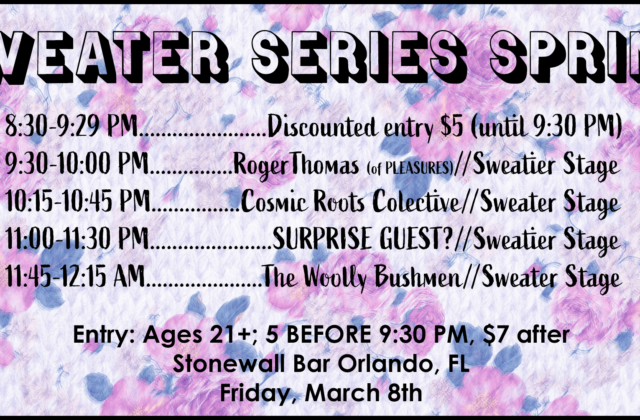 We all know and love our annual “America’s Favorite Musical Holiday Adventure,” Sweater Fest! For 12 years we’ve bundled up and sweated in our sweaters with our friends to great music to celebrate the end of the year and another sweatier year in Florida.

Sweater Fest was entrusted to Bobby Hellmuth in 2017 when founder Dave Hanson moved away. Since then, Bobby has embraced the vision of making Sweater Fest into a sustainable nonprofit. The Sweater Series is the first step in making this dream a reality.

What is Sweater Series?

An essay by Robert Hellmuth.

Sweater Series (Spring Event March 8th at Stonewall Bar, Fb Event) is a seasonal event I developed to fundraise “America’s favorite musical holiday adventure” (Sweater Fest—a soon-to-be nonprofit entity), so it may proceed to burgeon, flourish, and evolve sustainably (without ruining me financially). And more importantly, so we can effectively budget Sweater Fest so we can raise substantive funds for charities like the Zebra Coalition. Furthermore, Sweater Series was developed in a manner so that all the heroes dedicating their time and effort to assist will benefit in some way or another. For example, performing acts at each event will be filmed and live recorded for an original YouTube and Spotify Series (more details ahead ?). Also, I know thousands of different people have had a good time over the 12 years of Sweater Fest, and if you could please give our page a like and smash that “going” button for Sweater Series Spring, we’d sincerely appreciate it <3

Our goal of sustainability is associated with this unfortunate reality: Sweater Fest is currently unsustainable—primarily from a fiscal vantage point. We keep ticket prices at an affordable cost to the patron, and sometimes we must face the burden of financial loss. Since 2017, it has been funded by yours truly, Robert Hellmuth: graduate student with little wherewithal and plenty debt, who fortunately had an exceptional credit score at some point in his life. Last year (2018), many bands generously forewent pay, and the sound crew led by James Lynch and Obuasi Boulware absorbed a $500 loss, all to help me out as I had already burned a $700 hole in my pocket. No one had to do any of that, but they did, and I can’t thank them enough. There are no words I can think of to accurately express the gratitude I have for those who have helped with Sweater Fest in any regard over the past decade—so I’ll say thank you, I appreciate you all, and dearly so. <3

Anyhow, being “America’s favorite musical holiday adventure” meant we had to find a way to give the people what they want, and the Sweater Series Seasonal was thereby conceived. Because it is a fundraiser for Sweater Fest, performing acts will be forgoing pay (aside from travel expenses for touring acts). In return, they will receive content, as they will be filmed and edited by a videography crew led by Morgan Walker of Mogue Films, Tad Mathews, and James McGuigan—great people, videographers, and photographers alike. The live sound and recording will be led by Sweater Fest veterans James Lynch and Obuasi Boulware—and they’ve been involved in refining the Sweater Series soundscape for as long as I can remember.

In addition to booking the bands and coordinating the series, I will be mixing the live tracks with the assistance of my housemate and good friend—Joseph Davoli. The tracks will then be mastered by the grass-roots fest’s founding father: David Hanson, who recently completed recording school in Austin, TX—congratulations and we miss you! <3 Mitch Foster of Shows I Go To has also helped with both promotion and production-related affairs, along with Tommy Mott who made the first public Sweater Fest possible in The Milk District, and Taylor Bulloch of Stonewall Bar—Sweater Fest’s current home. Without the help of these exceptional people, the talented musicians, and wonderful attendees alike, Sweater Fest would fail to exist.

All-in-all, Sweater Fest is my favorite holiday. Coordinating it has been both an amazing and psychologically-tolling experience; it was given to me at a point in which I had little experience hosting shows, booking them, coordinating, et cetera—while I was (and am) in graduate school. I’ve invested more time, money, and effort into Sweater Fest than I’m willing to admit; doing my best to make Sweater Fest as enjoyable of an experience for everyone else as it is for me. I’ve learned a lot and I still have a lot to learn. However, I’m considerably relieved that we’ve devised a concept we believe will sustainably propel Sweater Fest into its strange, glorious future to be enjoyed by all. 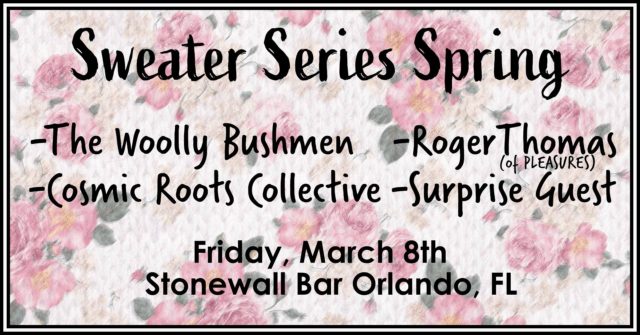 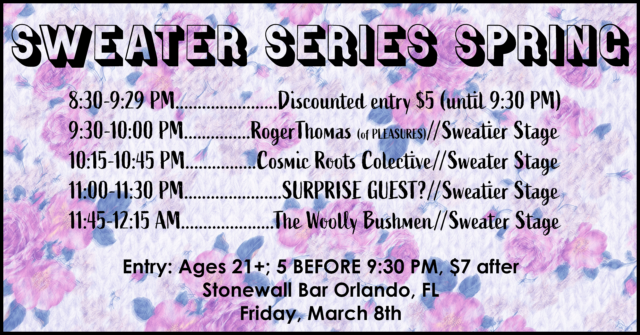