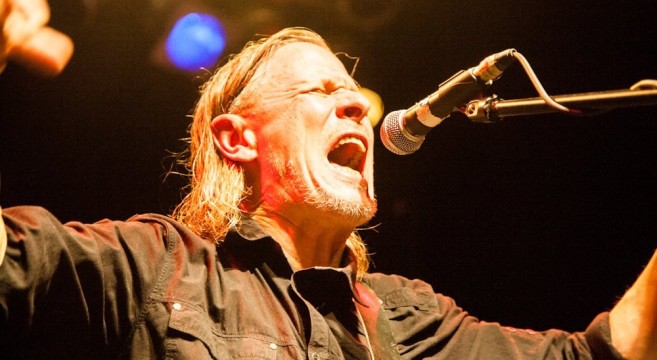 If punk was a religion, Swans would be the band we’d collectively shout our own anarchist “omm” to.

Everything about Swans’ set echoed of a nonchalant ritualistic ceremony. Michael Gira, the legendary frontman that is known for his cowboy-hat toting and accentuated angry snarl, had little to say on stage other than a few grunted “thanks.” There wasn’t time to chat when songs last up to 30 minutes each, especially when led by a practical shaman of experimental artistry.

Melodic, earth-shattering noise and shamanship is exactly what Gira’s lineup offered. The faces of Swans have shifted since the early-1980s formation and the latest incarnation favors the band’s later work, but that’s not a consequence by any means.

There are two potential movements you can make during a Swans set: head banging or zombie-like, entranced swaying. Loyals in their 20s through 60s clutched beers in a passionate stupor. And kudos to those punk enough to stand right next to the amplifiers throughout the evening.

Confession: This was my first time experiencing Swans. And, I didn’t know what I was getting into when the bartender shouted, “Who’s ready to lose their f****in’ hearing tonight?!” I made it through two of the six total songs in the center audience standing area without ear plugs before migrating to the  balcony. I consider that an accomplishment.

There’s this instant wave emanating off of the band, the casual but blunt “This is how we’re playing and you’re going to like it.” So I just banged my head in compliance to the rolling chants and wave-like progressions.

Gira led his crew through a variety of older and newer band releases, but picking the most powerful of the night is a toss-up between “Just a Little Boy (For Chester Burnett)” off the 2014 release To Be Kind and closer hit “Bring the Sun/Black Hole Man.” The latter had the most aggressive headbanging I’ve ever witnessed at any show.

Nostalgia was an indicator of the tour with opener “Little Annie” Bandez, who evoked nothing short of eerie emotion in her raspy haunting performance. Her life experience, from New York performer to ordained minister, felt potent in her presence.

Echoing artistry stayed consistently vitalized with Swans, between the quality of the band’s foretold roar and raw experience. Recorded Swans does no justice for a live performance. Few iPhones were raised to capture the moments, and the richness of Swans’ was as deafening as it was delving into expanding my definition of a great performance.